WILPF at CSW58: Access to Technology:Breaking Down Barriers to an Hollistic Women, Peace and Security Agenda 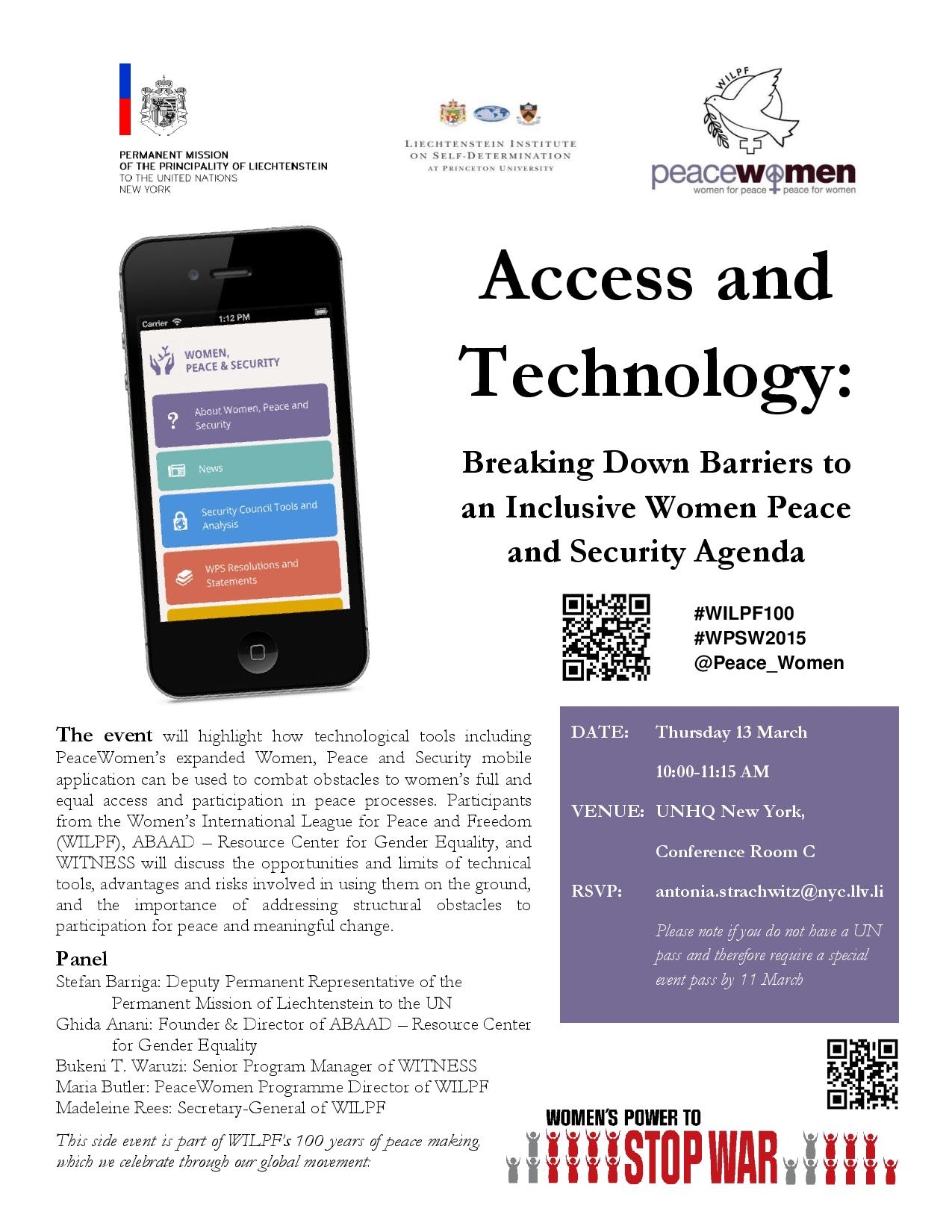 Organized by: The Women's International League for Peace and Freedom (WILPF), Permanent Mission of Liechtenstein to the UN, Liechtenstein Institute on Self-Determination at Princeton University

On March 13 2014, the Women's International League for Peace and Freedom held an event on how to leverage innovation, ideas and partnerships to strengthen women's peace activism and impact. It was also the formal launch of the WILPF PeaceWomen expanded Women, Peace and Security (WPS) mobile application.

The panel illustrated how to leverage innovation, partnerships, and ideas to strengthen impact and change. According to ABAAD Founder Ghida Anani, “To create change, you have to build a model that makes the old system obsolete.” Anani spoke about the importance of teaching youth and women to use social media to make their words and photos reach out to the international community, and her work with ABAAD on this in the Middle East and North African (MENA) region: “Technology can help overcome a gap between activism and academia and support women's truths.” WITNESS Senior Bukeni Warunzi highlighted the importance of addressing risks of gender based violence rather than treating technology as a panacea within the context of WITNESS's use of human rights videos to promote accountability and justice. He cautioned that technology should be used carefully to promote security especially for those in situations of risk.

WILPF's PeaceWomen Program Director Maria Butler, one of main founders of the PeaceWomen's WPS mobile application, introduced PeaceWomen's app as one innovative way to communicate the Women, Peace and Security agenda. She discussed how civil society as well as policy makers can use it to challenge systemic gender resistance by including a gender perspective in global and national policy, and called on attendees to push the boundaries to ensure a holistic implementation of the Women, Peace and Security agenda. Finally, WILPF Secretary General Madeleine Rees called for strengthened efforts to connect the dots between diverse agendas in a way that addresses gendered risks while leveraging innovation and partnerships for change.