WILPF at CSW58: Bosnia to Syria: Women and Conflict: Sharing Lessons and Strategy 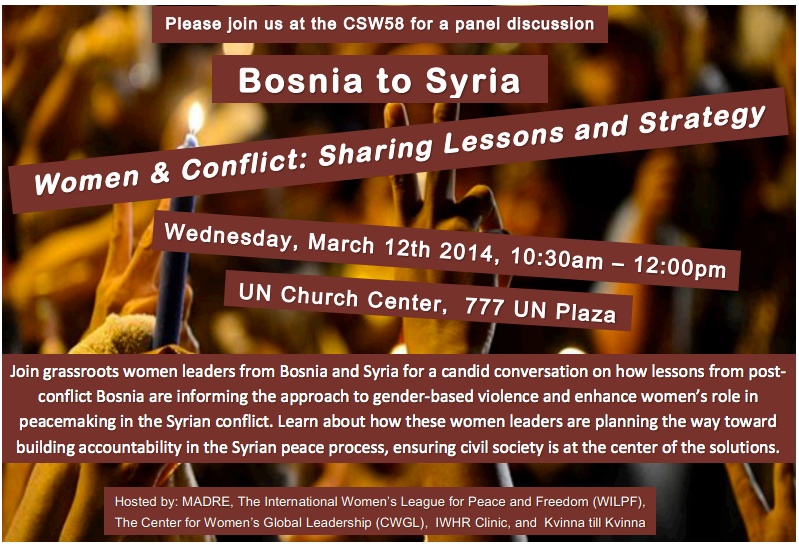 On March 12, 2014 at the third day of CSW 58, the Women's International League for Peace and Freedom (WILPF) organized a panel discussion at the UN Chapel on to discuss how to strengthen women's participation in peace processes based on experiences in Bosnia and Syria.

The session shared insights from the powerful recent workshops WILPF held bringing Syrian and Bosnian women together in Lebanon to share experiences from Bosnia and Syria and strengthen women's role in peacemaking in the Syrian conflict.

A key lesson learned from Bosnia was that treating women as victims promotes gender injustice and violence both in the short and long terms -- in both women's exclusion in the peace talks and also in post-conflict governance arrangements. “Because of the patriarchal framework of the Dayton Peace Agreement, we now do not have entry points for gender justice,” said Bosnian activist Gorana Mlinarevic. According to WILPF Secretary General Madeleine Rees, excluding women also excludes critical knowledge about how to rebuild communities and co-exist after conflict, and sets up “frozen” conflicts with arrangements based on power sharing rather than designed for peace. Bosnian activist Nela Porobić Isaković argued that the international community was complicit in both women's exclusion and its long-term impact on peace because action was based on views of women as victims rather than agents of change. Syrian activist Nawal Yazeji demanded that the international community build on these lessons learned: “We need a democratic transition with equal human rights so no one can ignore us anymore,” she said. Syrian activist Sabah Alhallak highlighted the urgency of the situation: now that the conflict has reached its third year, the top priorities of Syrian migrants she works with are security, freedom and justice.

As a whole, discussion highlighted how peace designed by war-mongers is a recipe for failure, while peace through women civil society leaders can change the game. According to WILPF Secretary General Madeleine Rees, “working with Syrian and Bosnian women reaffirmed my faith in humanity. It has been so powerful.”

Bosnia to Syria: Women and Conflict_flyer

Bosnia to Syria_Sharing lessons and strategy