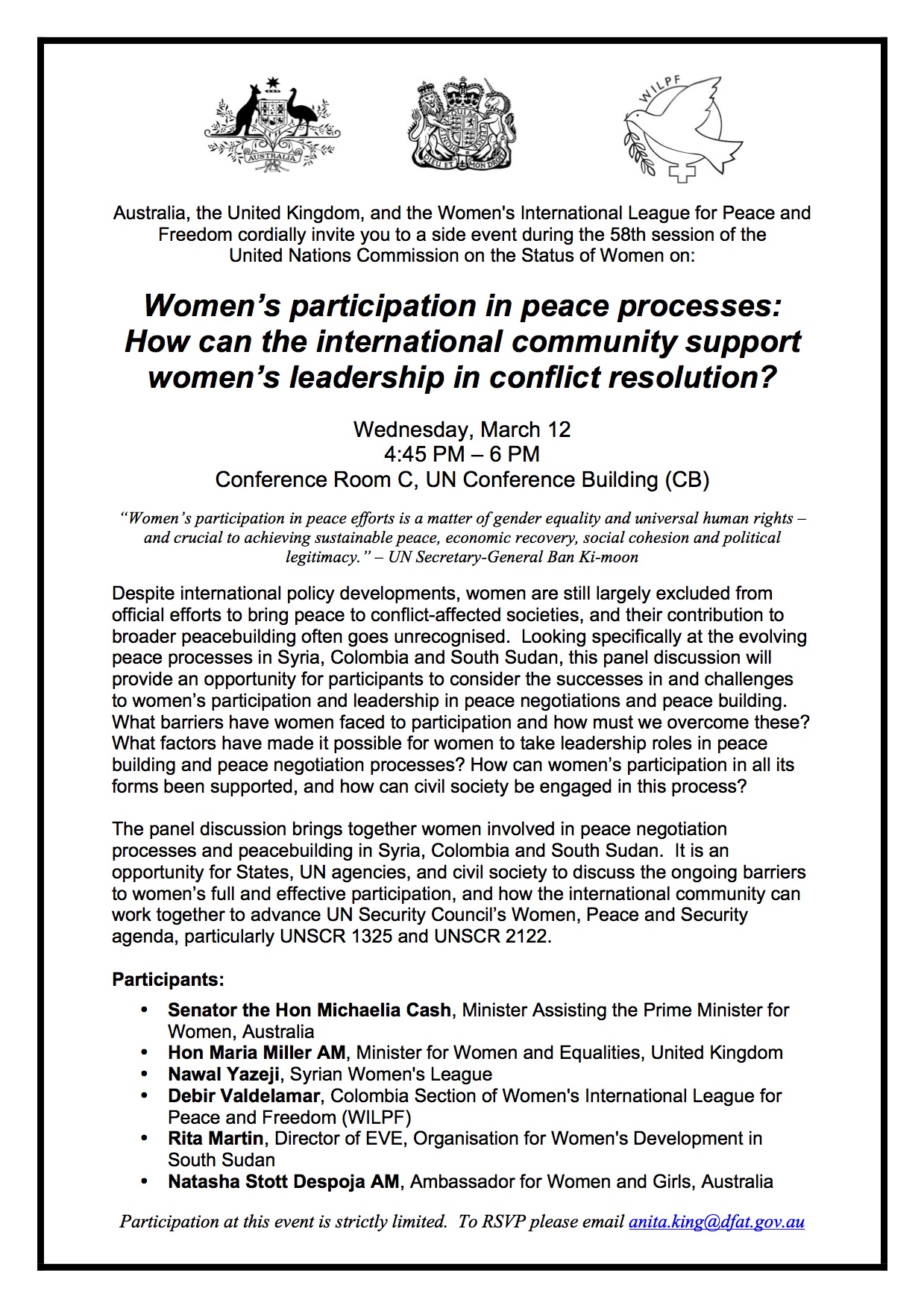 On March 12, 2014, WILPF, with the Missions to the UN of Australia and the United Kingdom, held a panel discussion to strategically consider the successes in and challenges to women's participation and leadership in peace negotiations and peace building, looking specifically at the evolving peace processes in Syria, Colombia and South Sudan. Australian Ambassador Natasha Stott Despoja provided an overview of the UN Resolutions and highlighted some of the areas that constitute as barriers for women's participation. She noted that despite international policy developments, women are still often excluded from official efforts to bring peace to conflict-affected societies. Moreover, she noted that women's contribution to broader peacebuilding often goes unrecognised.

Speaking on behalf of the UK, Maria Miller stressed the pivotal role of women in conflict management and resolution in order to create sustainable peace and noted the UK's leadership on implementing the WPS agenda. She also stated that “the UK calls for increased women's participation in peace processes”, while advocating the use of National Action Plans (NAPs): “we believe in NAPS to report on women, peace and security.” The discussion then shifted directions to provide insight on women's participation in peace processes from three conflict areas: Syria, Colombia and South Sudan.

Nawal Yazeji of the Syrian Women's League explained how Syrian women have been eager to be part of the peace processes, yet have been excluded from negotiations. She said that “peace without women is never real peace” and that the Syrian women “need the support of the international community.” Debir Valdelamar of WILPF-Colombia provided positive examples of how women in Colombia are actively participating in the conflict resolution - two out of the five people at the negotiation table are women. She noted that “peace starts at local levels” and as such, barriers preventing access to peacebuilding and participation in peace efforts at local level need to be addressed and eliminated. Rita Martin of Eve, South Sudan, described the critical crisis in South Sudan and the dire conditions of civilians. While the South Sudanese Constitution states that women should comprise 25% of decision-making, in the first round of peace negotiations there were no women negotiating on the side of the government. She called for an inclusive process that addresses, inter alia, Security Sector Reform and gender equality and she called for increased monitoring of early warnings.

Both Australia and the UK wholeheartedly supported the Women, Peace and Security Agenda and reiterated their strong belief that women need to be involved in peace processes in order to garner sustainable peace. The case studies from Syria, Colombia and South Sudan demonstrated the perseverance that women have in order to be part of peace processes and the continued obstacles women face that prevent them from meaningfully participating in their country's conflict resolution processes. As Michaelia Cash concluded, “we cannot expect peace to endure when half the population is side-lined!”.