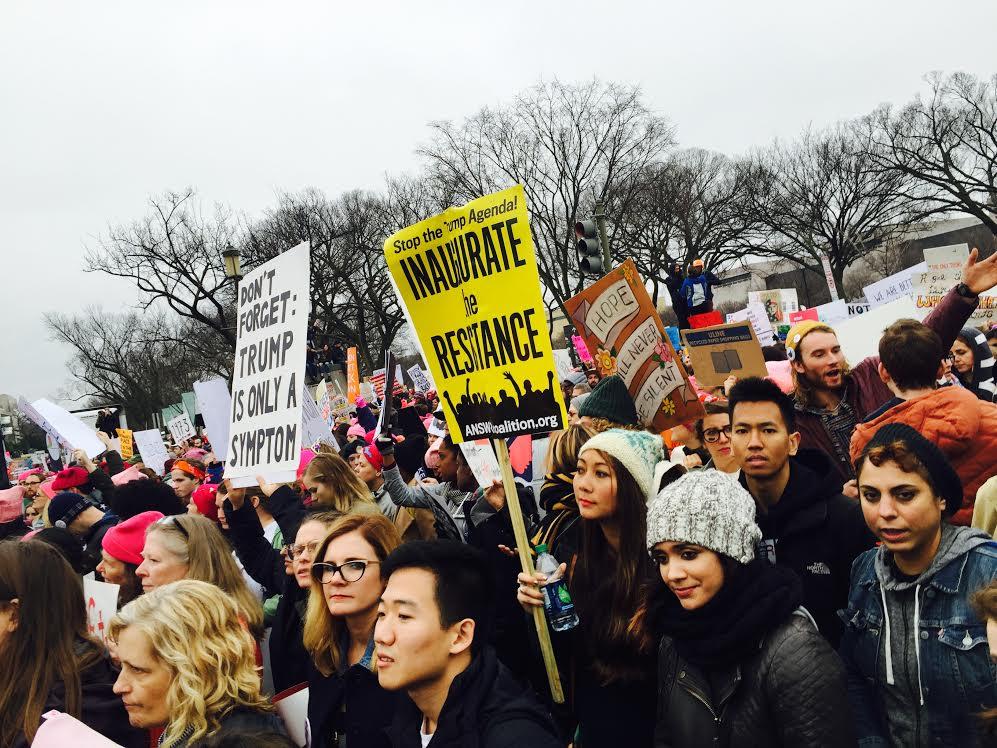 Attendees of the Women’s March on Washington, 21 January 2017 (Photo: WILPF)

New Year’s Eve, in my memory, was as red as the volcano goddess Pele’s hair, and as loud as an avalanche. While visiting family on the Big Island of Hawaii this year, the normally quiet street where I was staying transformed on the New Year’s Eve into an informal block party, where neighbours thronged together to spangle the street with sparklers and launch spinners and rockets that crackled like a million Tahitian drums.

Just as this community in Hawaii transformed an otherwise dark street into one of light and sound, so too in 2017 it is critical for all of us to share our feminist fire and expel the darkness for women’s livelihoods, human rights, and sustainable peace.

At the Security Council, Sweden has just begun its tenure as (2017-2019) non-permanent member, with a well-known and pioneering commitment to feminist foreign policy. Its progressive security agenda highlights concrete opportunities to share our feminist fire.

Sweden’s participation should make us ask ourselves: what would a feminist Security Council look like? And what actions can be taken in this direction for grassroots women?

A feminist security agenda would require replacing old-boys with democratic collaborations, and pivoting away from last-ditch crisis response toward gendered conflict prevention. This would require paying attention: rather than assuming that peace on paper in places like Colombia means the job is done; it would require following up to ensure effective implementation of peace agreements with women’s meaningful participation and rights at the centre. It would mean strengthening gendered conflict early warning systems and women’s human rights defenders doing critical prevention work in places like Nigeria and the Lake Chad region. It would mean strengthening monitoring of arms and their gendered impact and effective gendered reintegration and demobilisation programmes and security sector reform. And it would require overcoming ongoing failures such as immobilisation through veto to end the war in Syria and make meaningful the term “never again.”

With increased risks that have emerged in 2016, this year, a feminist security agenda also requires strengthened leadership to step up for women’s human rights, security and peace. Traditional leaders such as the UK must further step up to enhance accountability on integration of gender in negotiation and mediation including through new and existing groups (i.e., Friends of 1325, IEG 2242, Focal Point Network). However, new leaders are also urgently needed. Kazakhstan's proposal for member states to contribute 1% of military spending toward realising the Sustainable Development Goals could begin to address the gap between the Council’s action and mandate (including under Article 26). Uruguay and Sweden as members of the Accountability, Coherence and Transparency (ACT) Initiative could also work together to reform the Council for greater transparency and inclusion. Others must do their part as well.

Sweden cannot give us a feminist Security Council, but it can certainly help us demand action to move in this direction. The new Secretary-General’s support for conflict prevention in his first Security Council debate this year is one step of action needed for 100 days of feminist action activists have called for.

The night may be dark, but each of us can do our part to blaze a path.

Join us! Together we can share our feminist fire and light up the night.

61st Session of the Commission for the Status of Women: Preview

2017 marks the 61th session of the Commission on the Status of Women (CSW), which will take place at the United Nations Headquarters in New York from 13 to 24 March 2017. This year, the priority theme is "Women’s economic empowerment in the changing world of work" and the review theme is "Challenges and achievements in the implementation of the Millennium Development Goals for women and girls".

WILPF is excited to once again participate in CSW 61, and demands that in order to achieve transformative, sustainable development and peace, action for women’s economic empowerment must include women across the conflict spectrum and address root causes of inequality and violence. We have waited long for governments to fully implement UNSCR 1325 (2000), so the time is now to move the money from a political economy of exploitation and war to a political economy of peace and gender justice. The January 10 Security Council Open Debate entitled “Conflict Prevention and Sustaining Peace” presented the first opportunity for the new UN Secretary-General, Antonio Guterres, to establish the priorities of his administration. WILPF’s longstanding calls to pivot from crisis response to conflict prevention and promote an integrated approach was a central element of his priority goals. Guterres also emphasised the importance of engaging women and girls in conflict prevention and development. “When women and men face difficulties together, the society has the best chance to support prosperity, social conflicts, and violent extremism”, he stated.

Building on the statement of the Secretary-General, forty-seven percent of speakers at the debate highlighted the role of women in building peaceful societies and referenced the Women Peace and Security (WPS) Agenda. The majority of these statements advocated for the inclusion of women in conflict prevention efforts, peace processes, and governance. Some speakers called for the implementation of WPS resolutions, which closely align with, and facilitate, international peace and security. However, many speakers afforded the WPS Agenda only a passing mention in their statements, rather than recognising that, as the greatest indicator of peace, the engagement of women should be at the forefront of the discussion. 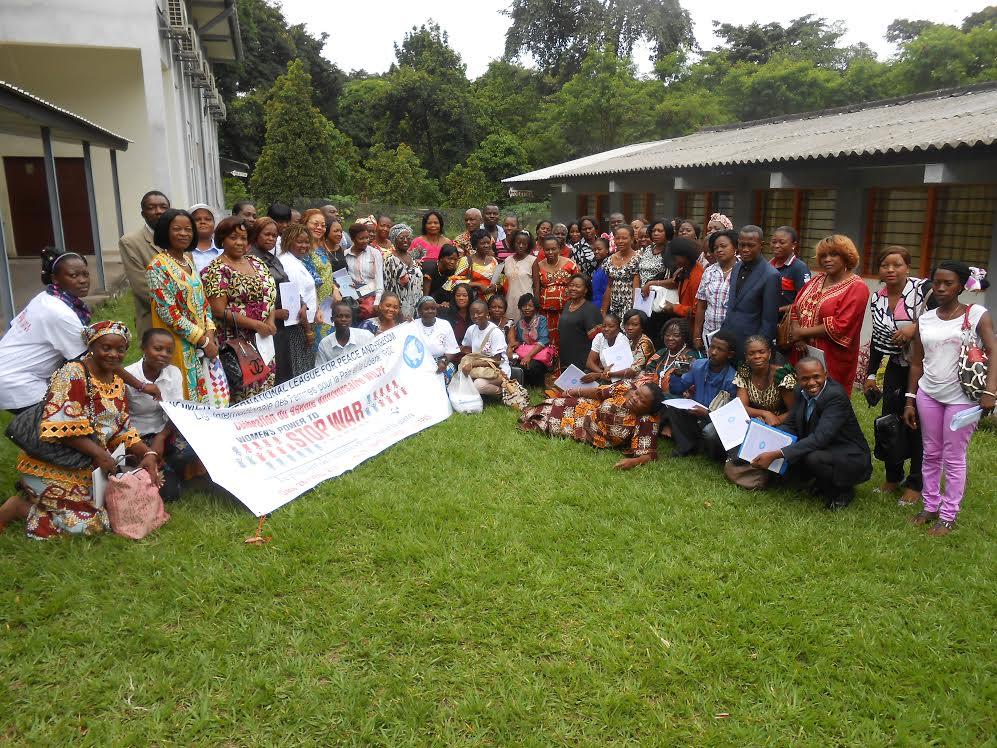 On 31 December 2016 the government and opposition parties in the Democratic Republic of the Congo (DRC) have reached an agreement for 2017 elections. This agreement is a significant step towards a peacefully managed transition consistent with the principles of social justice and equality. In fact, conflict over power in the DRC has been an ongoing source of instability for a long time, significantly affecting human rights situation in the country. This is especially the case for marginalised groups in societies, including women. In this vein, the United Nations Security Council has adopted a Presidential Statement on the situation in the Democratic Republic of Congo (DRC) stressing the importance of women’s inclusion in the follow up and implementation of this agreement.

The Women’s International League for Peace and Freedom (WILPF) in DRC has long called for strengthening women's meaningful participation and reducing militarism and arms to prevent violence against women and promote peace. Women peacemakers must be central to the transition process. Most recently, WILPF DRC has examined the impact of militarism in the context of transnational corporations (TNCs) on women through their report entitled “Life at the Bottom of the Chain: Women and Artisanal Mines in DRC” (2016). This report brings to light the human rights violations related to the activities of militarised supply chains and business enterprises that rise in the context of current conflict over power and their relationship to the root causes of instability in the country.

An Analysis of Chapter Twelve of the Global Study: Human Rights Mechanisms 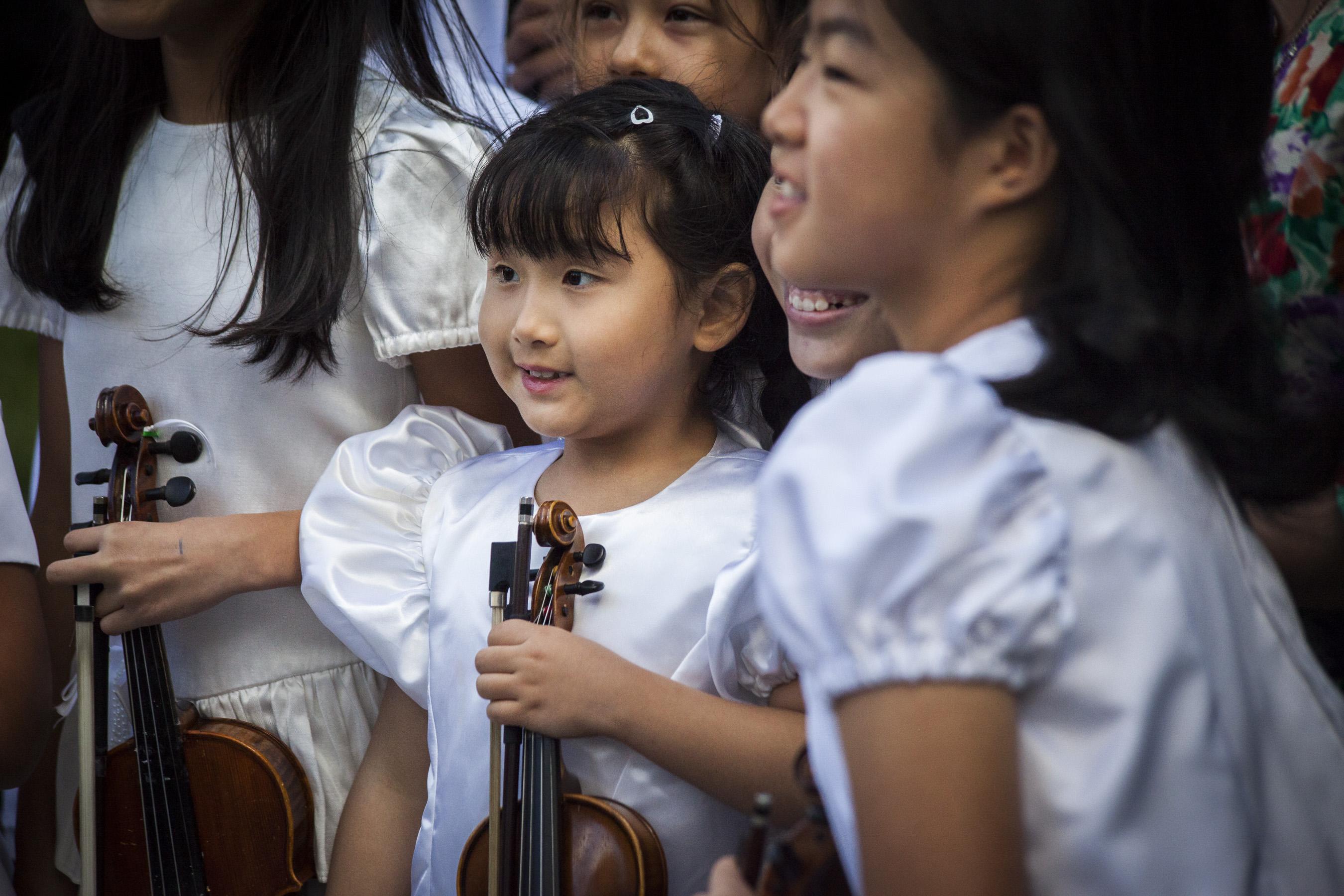 Chapter twelve of the Global Study on the implementation of UNSCR 1325 (2000) examines the linkages between existing human rights mechanisms and the Women, Peace and Security (WPS) framework. It notes that WPS resolutions highlight how women’s human rights and gender equality are central to the maintenance of international peace and security, and shows how an integrated approach by the international community can strengthen preventive actions and develop durable solutions to conflict situations to prevent re-emergence of conflict and sustain peace.

This chapter outlines how existing range of human rights mechanisms, including the human rights treaty bodies, the Human Rights Council (HRC) and its Universal Periodic Review and special procedures, regional human rights courts, and national human rights mechanisms, play an integral role in monitoring violations of women’s rights in conflict and post-conflict settings and can inform decisions made by all parts of the UN system. Similarly, it affirms that the WPS Agenda is not only relevant for the Security Council, but it is the responsibility of a broad range of actors, including in particular Member States.