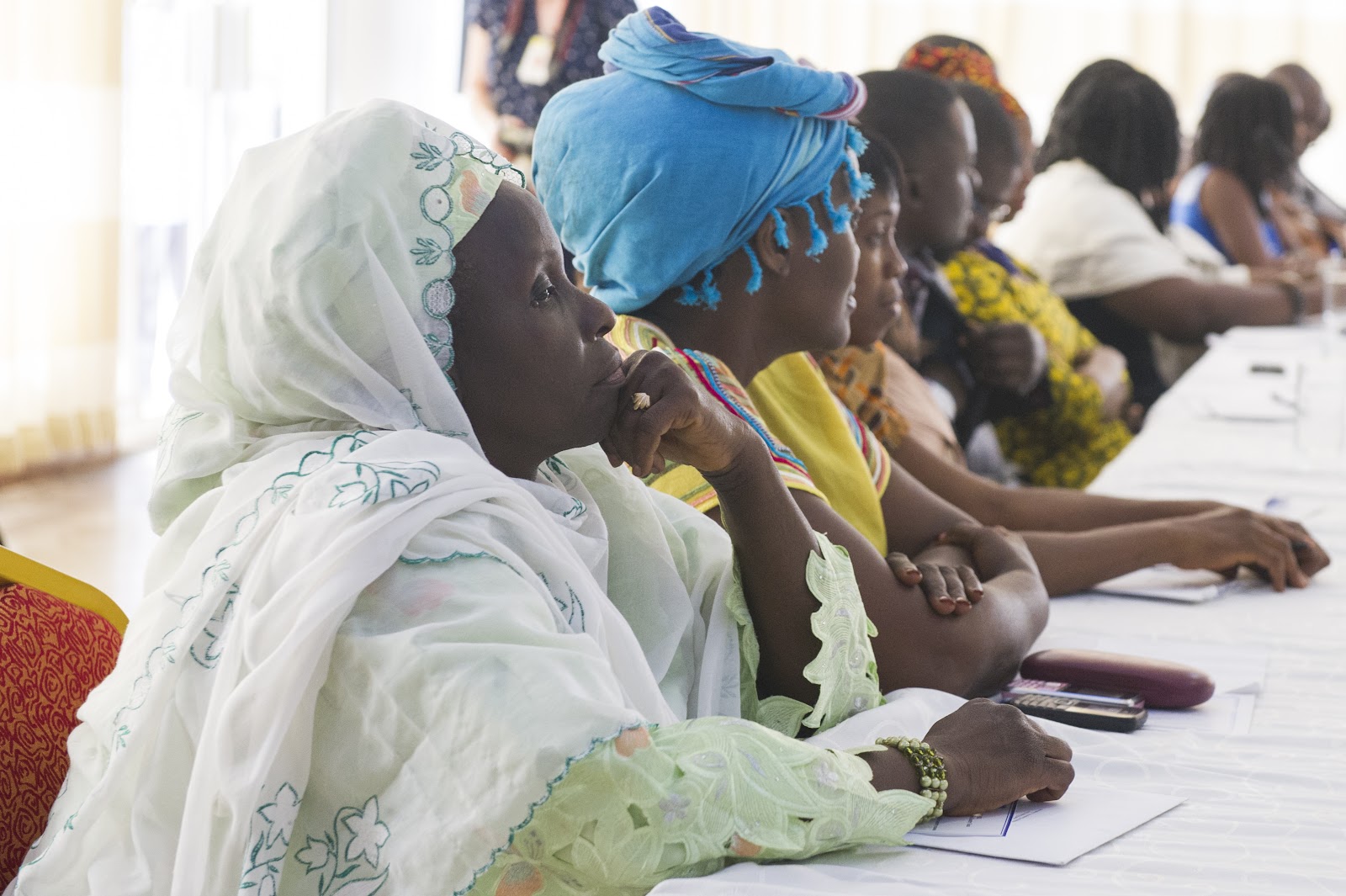 The UN Secretary-General’s 2017 Report on Women Peace and Security (WPS) tracks the progress made on the implementation of the WPS Agenda, pursuant to recommendations and commitments made at the 2015 High Level Review and Global Study on the Implementation of UNSCR 1325. It was compiled through the analysis of data provided by United Nations offices, civil society and regional organisations, as well as Member States.

In his report, the Secretary-General shares his vision of peace and security, grounded in conflict prevention, inclusivity and gender equality. Throughout the report, the SecretaryGeneral reiterates a well-known yet unenforced reality: women’s knowledge, community networks and leadership capacities are underutilised in peace and security efforts. Moreover, gender-responsive and protective environments for women remain lacking. As such, the report puts women at the heart of the Secretary-General’s commitment to a surge in diplomacy for peace, rooted in conflict prevention. Crucial strategies for integrating and bolstering gender equality within the UN prevention work are outlined to include:

● Guaranteeing women’s meaningful participation and leadership - While the Secretary-General is pleased with women’s continued mobilisation for peace in 2016 -as illustrated by women’s role in the Colombian Peace Agreement- he expresses alarm at the lack of qualitative and long-term inclusion of women in peace and security effort and in post-conflict political and economic life. Moreover, he calls for the development of effective mechanisms to provide meaningful measurements of women’s inclusion in peace processes.

● Strengthening technical gender analysis and expertise - The report focuses extensively on the need for gender expertise, authority and capacity at all levels of peace operations and across UN entities, including through the incorporation of gender-sensitive provisions in peace agreements, the delivery of humanitarian assistance and transitional justice.

● Promoting women’s role in disarmament, non-proliferation and arms control - The Secretary-General recognises the disproportionate impact of arms/weapons on women and girls. The report advocates for a gender-responsive approach to both disarmament and demobilisation, as well as for the full participation of women in preventing and combatting illicit transfers of weapons.

● Ensuring adequate financing for gender equality and WPS programming - The report calls for a re-prioritisation of UN entities spending patterns, with a focus on financing the WPS Agenda and gender expertise. It urges Member States to increase their funding for WPS work, including through domestic budget allocations, direct support of civil society and gender-focused aid in conflict and post-conflict settings.

The Secretary-General expresses concern about the slow progress made on women’s participation and influence in peace processes. In 2016, there was a decrease in women’s overall participation in delegations to negotiations compared to previous years. Moreover, the percentage of signed peace agreements containing gender-specific provisions has declined. Gender-inclusive peace processes should be the rule, not the exception.

Action steps to address persisting barriers were identified as follows:

● Provide financial and technical assistance to women involved in peace processes including training in mediation, advocacy and technical areas of negotiations, as per DPA’s Guidance on Gender and Inclusive Mediation Strategies;

● Increase participation through initiatives such as the Nordic Women’s Peace Mediators’ Network or the African Network of Women in Conflict Prevention and Peace Mediation (FemWise);

● Improve gender-balance in appointing mediation support teams, especially in the case of senior positions, to insure gender-sensitive and inclusive mediation efforts, in line with the Secretary-General’s Mediation Initiative.

The Secretary-General is pleased that gender is increasingly integrated into peace operations mandates and implementation, and welcomes the adoption of Resolution 2272 (2016) on addressing sexual exploitation and abuse (SEA). The Secretary-General however remains concerned about increasing levels of conflict-related displacement, exacerbated gender gaps in education, the lack of access for survivors of sexual and conflict-related violence to vital physical and mental health services, women humanitarian actors’ marginalisation and women human rights defenders’ persecution. Importantly, the Secretary-General calls on stakeholders to focus on all forms of violence against women as an early warning indicator of conflict.

● Request the joint-signing of a voluntary compact by Member States to strengthen commitments addressing sexual exploitation and abuse;

● Improve and increase investment in services for survivors of sexual and genderbased violence, including access to medical care, psychological counseling shelter and justice and reparation;

● Facilitate women’s leadership and participation in humanitarian action, preventing and responding to gender-based violence in crisis and ensuring universal access to sexual and reproductive rights;

The Secretary-General notes women remain especially exposed to exploitation and recruitment by terrorist groups. He affirms that women’s empowerment must lie in increasing women civil society’s leadership in prevention initiatives and in the incorporation of gender into policies and strategies to prevent and counter violent extremism and terrorism.

● Strengthen networks of women civil society organisations working in contexts affected by violent extremism and terrorism on the model of the Global Solutions Exchange and ICAN’s Women’s Alliance for Security Leadership;

● Ensure a human-rights based and gender-sensitive approach to rehabilitation and reintegration programmes for returnees and victims of extremist violence, following the example of the Western Balkan Counter Terrorism Initiative.

The Secretary-General recognises the positive relationship between women’s economic and political empowerment and sustainable peace. Recent research however suggests a fundamental lack of critical gender analysis in economic recovery response. Moreover, the Secretary-General points out that as of 1 July 2017, only 17 countries had elected a woman as a Head of State or Government and that the global proportion of parliamentary seats occupied by women had stagnated at 16 per cent in the last two years.

● Guarantee that post-conflict economic recovery responds to the needs of women;

● Make sure that women hold leadership positions in the design and implementation of post-conflict economic recovery;

●  Ensure the integrity and inclusiveness of the electoral process, including through the use of temporary special measure such as legislative quotas;

● Investigate and prosecute allegations of violence, assault or harassment of women elected officials and candidates for political office.

The Secretary-General reiterates the importance of sustained attention to the genderspecific impacts of armed violence and the promotion of women’s full participation in disarmament, nonproliferation and arms control, as per Resolution 2122 (2013). He supports the mandatory inclusion of gender considerations for all funding applications for the UN Trust Facility Supporting Cooperation on Arms Regulation.

● Comply with international law and principles on disarmament;

● Recognise the importance of gender considerations and women’s participation in the control of Small Arms and Light Weapons (SALW);

● Provide data and analysis on gender-specific effects of arms on women.

The Secretary-General reaffirms the need to ensure gender mainstreaming in the delivery of justice in conflict settings, as women face significant inequalities in access to transitional justice and rule of law institutions. According to the report, there also remains progress to be achieved in promoting women's rights within indigenous justice systems.

● Support gender-sensitive rule of law assistance in conflict-affected countries such as in the case of the UNDP’s work in Afghanistan and Timor-Leste and the UN Peacebuilding Fund project in Mali; - Deploying gender advisors to transitional justice mechanisms and specialised lawyers in women’s rights safe spaces in refugee camps;

● Institute proactive recruitment strategies to ensure gender parity in the staffing of judges and commissioners in national criminal tribunals and transitional justice and rule of law institutions; - Commit a minimum of 15 per cent of the post-conflict programme funds of the UN to be allocated towards meeting women’s needs, including their access to justice;

● Ensure that prosecution of members of terrorist and violent extremist groups are not limited to terrorist crimes, but consider the gendered nature of these crimes.

The Secretary-General focuses on the roles of national governments, regional organisations, Member States, the UN and the Security Council in WPS implementation and draws additional attention to women’s representation in the UN and gender expertise. He reports that 69 countries have adopted National Action Plans (NAP) on WPS, but is concerned at their level of implementation, the meaningful inclusion of civil society, and at their allocated budget. At the Security Council level, the Secretary-General welcomes important innovations such as the convening of experts in the Informal Experts Group on WPS and the inclusion of a women civil society representatives in country-specific briefings.

● Adopt and implement national or regional action plans on WPS with indicators to monitor progress;

● Ensure senior gender advisors and senior women protection advisors are being budgeted for and rapidly deployed to ensure missions have sufficient gender expertise, authority and capacity at a senior level;

Lastly, the Secretary-General expresses his concern about the fact that WPS efforts remain unpredictably underfunded in 2016. Moreover, gender equality programming and expertise are often among the first to face budget cuts.

● Increase funding to WPS, including through domestic budget allocations, more gender focused aid in conflict and post-conflict settings, direct support to civil society and increased contribution to special funds such as the Women's Peace and Humanitarian Fund, the United Nations Trust Fund in Support of Actions to Eliminate Violence against Women, the United Nations Fund for Gender Equality and the Multi-Patterns Trust Fund of the United Nations Action against Sexual Violence in Conflict;

The Secretary-General’s report affirms that while the normative framework for the WPS Agenda has considerably been strengthened over the last 17 years, the extreme political marginalisation of women in decision-making in matters of peace and security persists. The report outlines five priority areas of action to fill in the existing gaps in implementation:

● Bring women’s participation and leadership to the core of peace and security efforts;

●  Protect the human rights of women and girls during and after conflict; 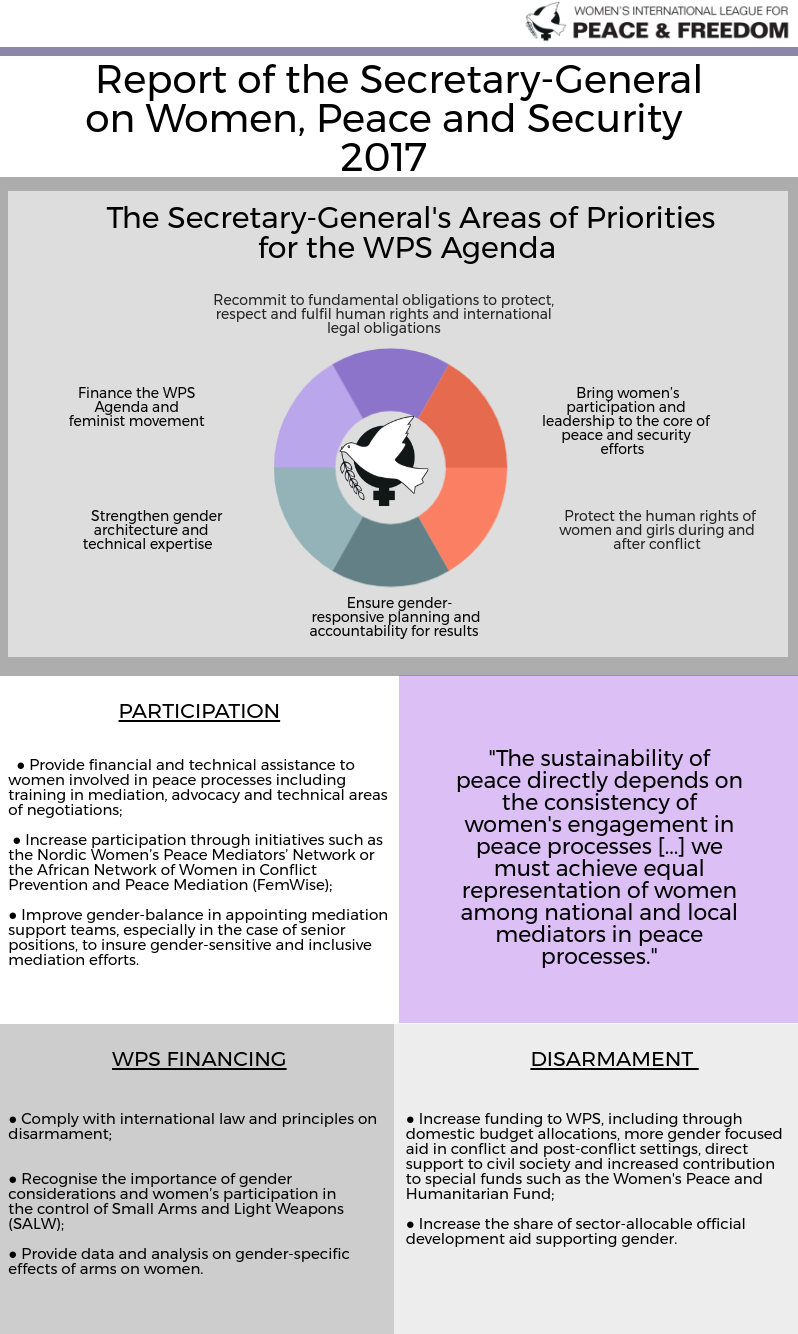 OVERVIEW OF THE SECRETARY-GENERAL REPORT ON WOMEN AND PEACE AND SECURITY 2017.pdf

Report of the Secretary General on Women, Peace and Security 2017