To remind, reflections on SCR 1325 NAP began in Cameroon in 2012, during a training workshop on women's contribution to peacebuilding in latent conflict countries, organized in Douala from March 29 to 30. The civil society then decided to investigate on Resolution 1325 situation in Cameroon and initiate an advocacy for the drafting and implementation of a National Action Plan.

Established officially in January 31, 2014, WILPF Cameroon made UNSC Resolution 1325 its priority , with the mission to advocate for a national action plan, in order to implement the Women, Peace and Security Agenda according to the recommendations of that Resolution.

WILPF Cameroon’s first actions in this direction were the training of its members and other CSO leaders to ensure outreach and more effective advocacy. The first high-level discussion in Cameroon on the issue was held from 9 to 10 October 2014 in Yaoundé, during the regional workshop on women’s participation in conflict prevention and crisis management, in partnership with the Ministry of Women's Empowerment and the Family and UN Women. It was about mobilizing all stakeholders in the process of developing a National Action Plan of Resolution 1325 and advocating for its adoption by the Cameroon government. This workshop was followed by a retreat organized by UN Women in partnership with WILPF Cameroon, to consolidate the outcomes of the regional workshop. The organization Servitas Cameroon, the Ministry of Women's Empowerment and the Family, the Ministry of Territorial Administration and Decentralization, the Ministry of Defense and UNHCR took part at the retreat.

In October 2014, the participation of WILPF Cameroon at the14th anniversary of the Resolution 1325 in New York, including a panel on Boko Haram, gave the opportunity to show the urgent need of this resolution in Cameroon. During this period, WILPF Cameroon conducted a survey in the East of Cameroon, to find out the degree of knowledge and the level of implementation of Resolution 1325. This was followed by the establishment of a Media/CSO consultation framework for effective implementation of Resolution 1325 in Cameroon.

The calendar of activities to achieve the NAP was elaborated after WILPF Africa regional workshop on the participation of women in conflict prevention and crisis management. The workshop was organized in Yaoundé from 27 to 28 November 2015, by WILPF Cameroon with the support of Folke Bernadotte Akademy through WILPF Sweden and under the patronage of the Ministry of Women's Empowerment and the Family.

The official launch of the process of SCR 1325 NAP in Cameroon took place on November 15, 2016. Key ministries, international organizations, embassies, and civil society organizations attended. Prior to that, WILPF Cameroon was entrusted to conduct a baseline study at national level on the assessment of the level of knowledge of UN Security Council Resolution 1325 and the impact of armed conflicts on women and girls in Cameroon, in order to draw priority areas of the NAP. The restitution workshop was held on February9, 2017. The study was conducted under the overall coordination of the Ministry of Women's Empowerment and the Family, the technical supervision of UN Women and with the financial support of the United Office in Central Africa (UNOCA) and the Sweden Folke Bernadotte Academy (FBA). 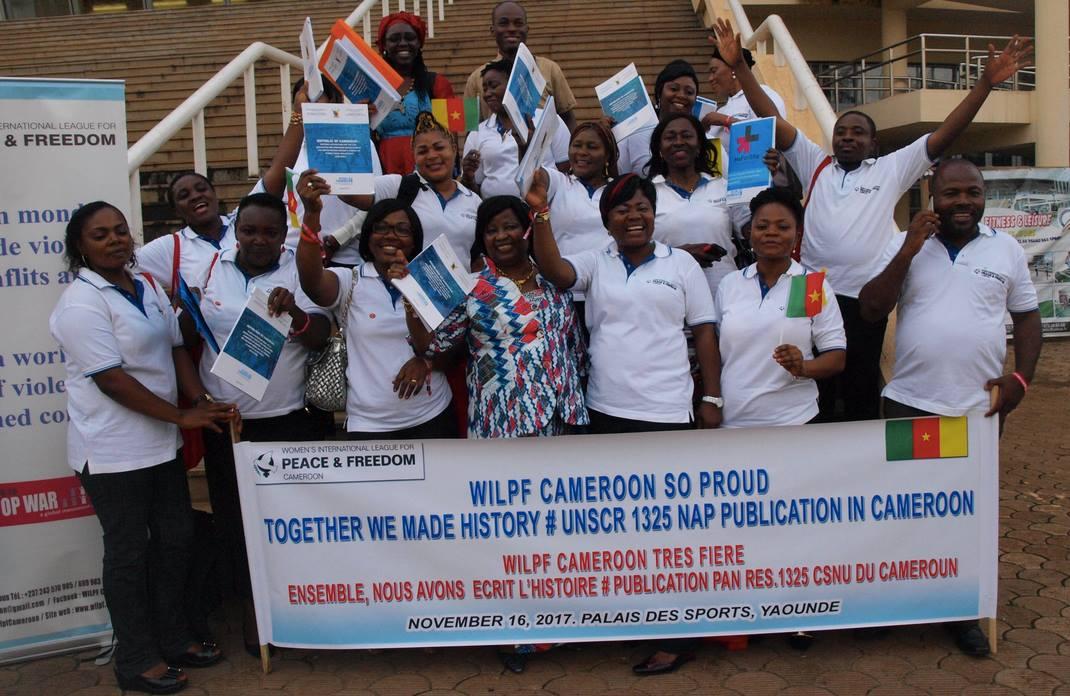