Period of the review: October-December 2017 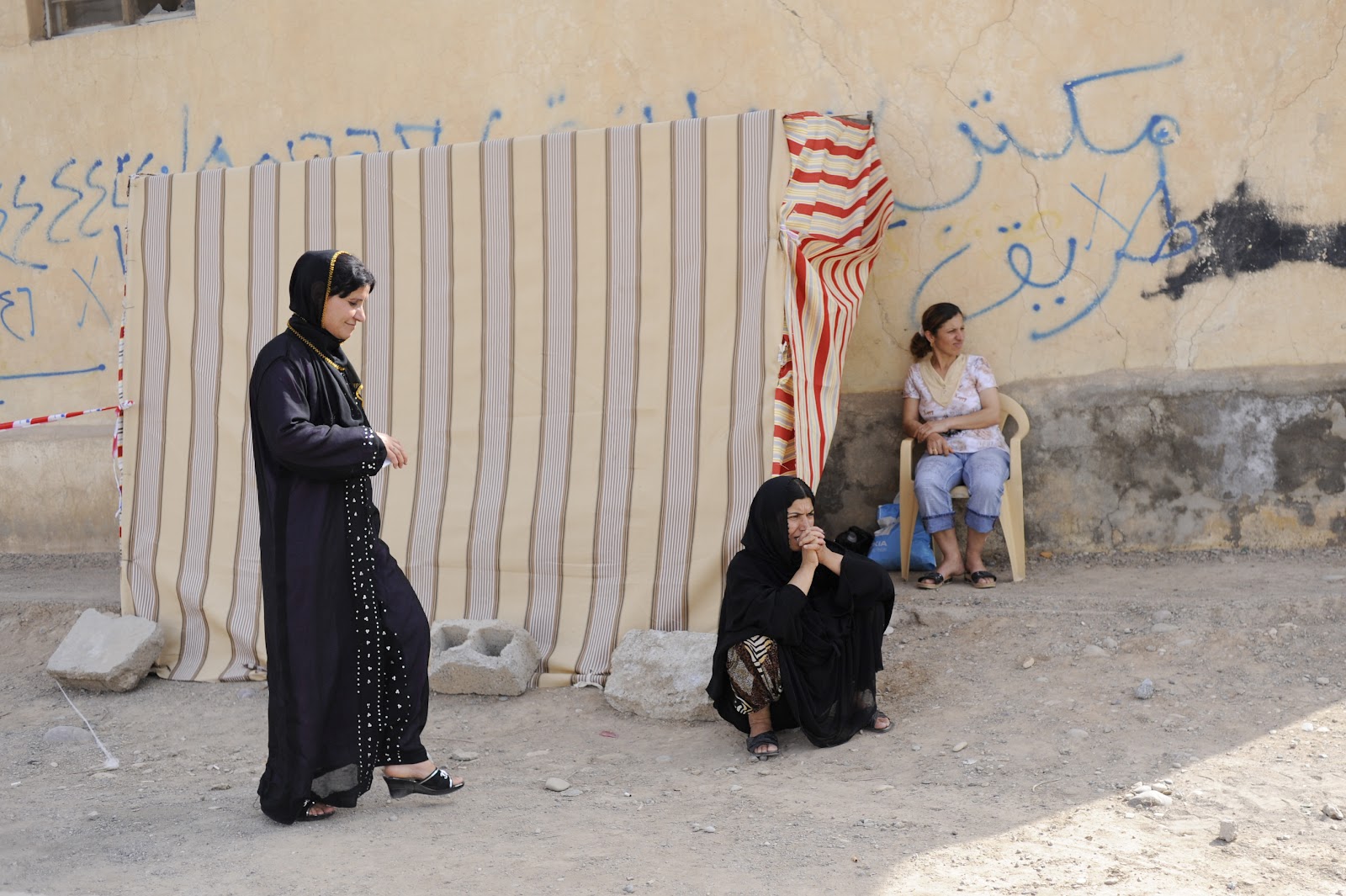 Parliamentary and Presidential elections are being held in the Kurdistan region of Iraq. Women enter a security tent designated for female voters in July 2009 (UN Photo/Rick Bajornas)

Pursuant to UN Security Council Resolution 2367 (2017), the Security Council extends the mandate of the United Nations Assistance Mission for Iraq (UNAMI) until 31 July 2018. Resolution 2367 specifically highlights the need for all segments of the Iraqi population to participate in the political process, political dialogue and economic and social life of Iraq, including through the equal participation of women (PP 8); encourages the Government of Iraq to continue pursuing more substantive reforms, particularly economic and institutional reforms to improve the standard of living for all Iraqis, including by improving the situation of women and girls (PP 9); emphasises that all parties should take all feasible steps to ensure the protection of affected civilians (PP 13); stresses the importance of the United Nations, in particular UNAMI, in advising, supporting and assisting the Iraqi people, including civil society, to strengthen democratic institutions, advance inclusive political dialogue and national reconciliation (PP 17).

The report outlines political and security developments in Iraq for the period between October and December 2017. It specifically discusses the efforts of UNAMI to support electoral processes, to facilitate human rights monitoring and to support humanitarian activities in Iraq. In partnership with UNAMI, the federal government has shifted its focus towards security, stability, reconstruction and economic prosperity (para. 3), as well as the complete eradication of terrorism (para. 5). This includes continuing work to tackle political corruption and remove elected officials that have been charged with corruption from office (para. 11), with a view of creating a conducive environment for free and fair future elections. The federal governmental reform is also presented in the report as a a first step towards resolving the humanitarian situation, including accelerating the return of displaced persons (para. 12). In the same vein, President Fuad Masum has led dialogues between Baghdad and Erbil for the purposes of stabilising regional governance in the Kurdistan region (para. 24). Although the Iraqi government had openly declared its final victory over the Islamic State in Iraq and the Levant (ISIL) (para. 3), Baghdad continues to experience more improvised bombing attacks (para. 26). Moreover, ISIL has increased attacks on civilians as they continue to lose control of territory, and as at 1 December, 1507 Yazidi women and girls remain in ISIL captivity (para. 50). Retaliatory attacks have also been targeted at families of suspected ISIL members (para. 53), increasing the overall occurrences of violence and human rights violations. The ongoing presence of arms in the country continue to inhibit sustainable peace processes, as well as to influence the increase in the level of violence, that affects women and girls disproportionately.

Of 77 paragraphs in the report, 13 (17%) include references to WPS-relevant issues, which is a notable increase from the last report. Unlike in the previous report, the Secretary-General mentioned the increased engagement with women’s groups and civil society organisations to improve women’s participation in political, electoral and reconciliation processes (para. 40). However, while it recognises the importance of women’s participation in political and peacebuilding processes, it completely omits the value of women’s participation in resolving the  ongoing conflict and the value of services provided by local women’s organisation to refugees and SGBV survivors. Like the previous report, this report does not include in-depth gendered-analysis of human rights and humanitarian situation in Iraq, providing limited focus on gender-specific care and non-violent solutions for sustainable peace. To this end, the Secretary-General falls short of his mandate under Resolution 2107 (2013) to strengthen the engagement of all segments of the population in peace work.

In spite of the continuing violence committed by ISIL and Turkish armed forces, UNAMI has not been requested to work with the government to prevent the flow of arms in the country in line with the UN 2013 Arms Trade Treaty. There is also no focus on the incorporation of a gender perspective and the participation of women across the prevention cycle, even though gender mainstreaming is crucial to successful prevention efforts. To this end, there is no account of UNAMI’s support for the development of early-warning mechanisms and support for civil society initiatives in relation to developing such mechanisms.

The report discussed the ongoing humanitarian crisis in Iraq with no specific consideration given to the increase levels of suicide in refugee camps, which clearly demonstrates the current gaps in humanitarian response. Gender-sensitive forms of aid needed by displaced persons are not discussed, including sexual and reproductive health, as well as basic access to female doctors, translators and other humanitarian actors. It is also unclear whether current aid is provided in line with international humanitarian law and is not subject to donor limitations. Further, there is no gender-analysis of the data of displaced persons that would ensure better understanding of the gender dimension of the conflict. The report has also failed to encourage partnership with civil societies and women-led groups in addressing the humanitarian issues in the country.

In the report, the Secretary-General details UNAMI’s work with UN Women to increase the representation of women in the political, electoral and reconciliation processes (para. 40) by revising present electoral frameworks and training women in capacity-building. However, women’s political participation remains limited and women continue to have little influence on what is put to a vote due to poor representation. The report also does not provide any specific information on efforts by women’s groups like the National Strategy for the Advancement of Women. Lastly, there is no information on efforts by the Government or UNAMI to allocate funding and resource for the implementation of UNSCR 1325 (2000) National Action Plan of Iraq. Thus, it is unclear whether UNAMI has successfully fulfilled its mandate to strengthen democratic institutions, advance inclusive political dialogue and national reconciliation, as mandated under Resolution 2367.

According to the report, UNAMI has continued to advocate for the accountability of perpetrators of human rights violations, particularly war crimes, crimes against humanity and genocide (para. 49). However, no substantial headway has been reported regarding the creation of a specialised court and tribunals to facilitate accountability and justice in relation to violent crimes or discrimination based on gender, sexual orientation and gender identity. There is also no mention of addressing the ongoing fear by lawyers, judges and other judicial personnel who continue to be averse to taking on such cases for fear of reprisals by armed groups. It is also unclear what kind of specific services and assistance would be available for victims and their families.

As existing gender analysis suggests, disarmament in Iraq is key for effective stabilisation and prevention of conflict relapse in Iraq. For starters, UNAMI should be called upon to work with the federal government in implementing the ATT, and curbing the trade and flow of arms in the country. Nonetheless, sustainable peace goes beyond disarmament of state and extremist groups. As illustration, although the UN was successful in disarming Iraq in 1991, it still failed to prevent the 2003 war. Thus, the Secretary-General must also inquire UNAMI to support women’s organisations in their work to prevent violent extremism and rehabilitate former extremists. It is also pertinent that future reports incorporate the ways in which women and gender analysis are included in the country’s national prevention initiatives and early warning mechanisms. Future implementations of disarmament, demobilisation, and reintegration programmes must prioritize and be set up in consultation with women and girls.

The political environment in Iraq must ensure that humanitarian and protection work are informed by women’s experiences and perspectives on the ground to reflect priorities of general population, including the priorities of local communities and different groups within them. The Secretary-General should call upon UNAMI and the Iraqi government to strengthen their collaboration with women and civil society organisations to streamline coordination mechanisms and ensure the delivery of adequate, gender-sensitive humanitarian aid to vulnerable persons. For example, activities of the Organization of Freedom for Women in Iraq remain illegal, particularly the operation of shelters for battered women, who do not receive needed psycho-sociological support through existing humanitarian channels. Apart from basic food and health aid for refugees, aid should also focus on improving access to international protection through humanitarian visas, increased refugee resettlements, greater access to information and fair hearings.

The Secretary-General should encourage the Government to develop, finance and implement its UNSCR 1325 National Action Plan to include the meaningful participation of civil societies and women organisations throughout peace talks and processes. Additionally, future reports should also discuss the participation of women in political and peace processes relating to the ongoing conflict, as well as efforts made to strengthen and facilitate women’s political engagement in the upcoming May 2018 elections.

The Secretary-General should accord greater focus towards gender justice and accountability for gender-based crimes as a critical part of peacebuilding processes. In the face of the most heinous crimes, including the ongoing genocide against the Yazidi and other ethnic minorities, the Secretary-General should also request the Council to take immediate measures in line with the Genocide Convention. Future reports should further expand the scope of all gender-based crimes including crimes against women human rights defenders, LGBTQ persons, men and boys, civilian women and girls with actual or perceived ties to ISIL, and persecution of individuals who do not conform to gender norms, so as to ensure accountability for all perpetrators.