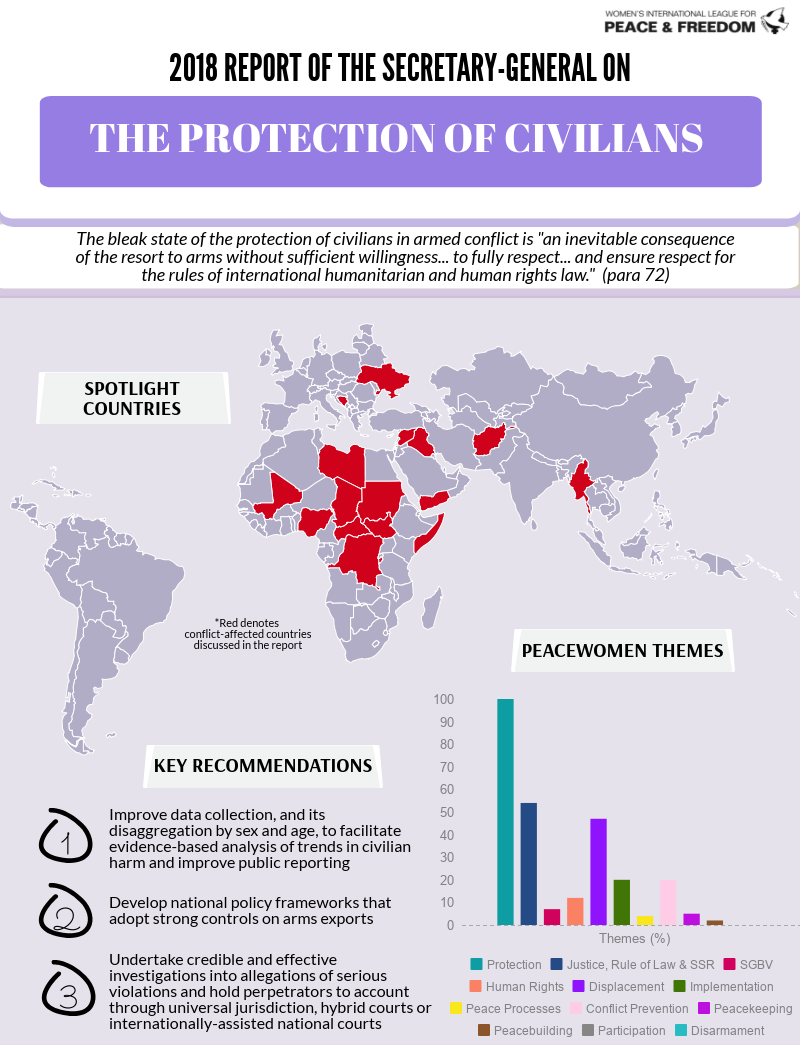 The Secretary-General outlined the bleak state of protection of civilians in armed conflict; highlighting the grim realities faced by civilians and humanitarian personnel caught between indiscriminate attacks, the widespread use of explosive weapons, terrorism and conflict-driven food insecurity. Against this backdrop, the Secretary-General reiterated his call to prevent the outbreak, continuation, escalation, recurrence of conflict through dialogue and inclusive peace processes, coupled with a long-term holistic approach, that address the root causes of conflict. To achieve this, he highlighted the importance of: respecting international humanitarian and human rights law and promoting good practice by parties to conflict; protecting the humanitarian and medical mission and according priority to the protection of civilians in United Nations peace operations; and pursuing durable solutions for refugees and internally displaced persons.

Notable themes in the report include:

Unlike in the previous report, the Secretary-General made more references to conflict prevention in line with his recent calls for a quantum leap in funding for activities that address the root causes of conflict. The report highlighted initiatives that have adopted a “greater consideration of the role of the protection of civilians in the broader context of crisis prevention” and referred to conflict prevention as “an overarching priority” (para. 76). In particular, he praised efforts my Missions to innovate and develop policies on the prevention of, and responses to, conflict-related sexual violence (para. 35). He also noted national policies on conflict prevention as a mechanism for the protection of civilians.  In particular, he noted that the Government of Afghanistan, in collaboration with the United Nations and the Centre for Civilians in Conflict, has successfully adopted a national policy on the prevention and mitigation of civilian casualties (para. 50).

The Secretary-General expressed concern regarding the continued use of sexual violence as a tactic of war. The report noted that strategic mass rape had been conducted in numerous conflict situations as part of “ethnic cleansing” or discrimination against the victim’s identity and affiliations (para. 13). The selective targeting of victims from specific political religious or ethnic groups mirror the fault lines of crises in Myanmar, the Democratic Republic of the Congo, Iraq, Nigeria and other countries (para. 13). According to the report, conflict-related sexual violence is a key driver for forcible displacement and bears corrosive effects on social cohesion. Sexual violence by peacekeepers was also vaguely addressed in the report; highlighting the continuous work peacekeeping missions are doing to develop policies on the prevention and resolution of conflict-related sexual violence (para. 35).

The Secretary-General noted the increasing trend of attacks against medical workers and facilities. According to the report, these attacks remain a major impediment to the provision of humanitarian and medical aid for vulnerable persons in conflict areas (para. 27). Attention was focused to the prevalence of these incidents in Libya, Syria, Afghanistan and the Central African Republic, with Syria experiences the highest number of attacks on medical facilities and workers (para. 28). In Afghanistan, for example, 65% of those who need healthcare services are women (para. 28). In addressing these trends, the Secretary-General called on Member States to continue implementing Resolution 2286 on the protection of the wounded and sick, medical personnel, humanitarian personnel and humanitarian transportation and equipment (para. 29). He also lauded efforts by the informal Group Of Friends, co-chaired by Canada and Switzerland, on Resolution 2286, as well as the French-led declaration on the protection of humanitarian and medical personnel in conflict.

The report highlighted forced displacement as a continuing feature of conflict, particularly in Syria, Yemen the Democratic Republic of the Congo and Ukraine. The resurgence of conflict, coupled with constraints on humanitarian access, had resulted in a displaced global population of approximately 65 million at the end of 2016 (para. 16). In the Democratic Republic of the Congo, for example, the number of internally displaced persons doubled to 4.5 million in 2017 (para. 17). Similarly in Syria, the internally-displaced population increased by 1.8 million people in the same year (para. 16). To address the issue, the Secretary-General called for the future global compact on refugees to strengthen international response to large movements of refugees, including by easing the burden on host countries, meeting the needs of refugees and host communities and securing durable solutions (para. 18). He also called on Member States to consolidate their efforts, to better understand urban displacement and improves responses to protracted internal displacement, on the mark of the twentieth anniversary of the Guiding Principles on Internal Displacement in 2018. However, apart from highlighting that the a portion of attacks on two mosques in Kabul had appeared to deliberately target women (para. 15), no gender-disaggregated data on displacement were shared.

Justice, Accountability and the Rule of Law

The Secretary-General afforded significant attention to the importance of accountability and justice mechanisms for violations. He welcomed positive developments in national-level investigations and prosecutions, including hybrid courts and the Special Criminal Court in the Central African Republic (para. 32) as representations of prompt and concerted action to enhance accountability at the national level. The report also noted similar action at the international level in the form of the International Tribunal for the Former Yugoslavia’s conviction of Ratko Mladic in 2017 for genocide, war crimes and crimes against humanity (para. 33). While the Secretary-General conceded that this process took more than 20 years after the occurrence of the crimes, he reiterated the nature of international criminal justice as a long-term undertaking that requires committed support by the international community. Lastly, he suggested for greater consideration to be given to the utility of targeted sanctions imposed by the Security Council (para. 71) as a response to violations of international law.

The Secretary-General noted the continuing and widespread use of explosive weapons in densely-populated, urban areas. In 2017, civilian casualties from the use of explosive weapons increased by 38% from 2016 to 2017, with populated areas hosting 92% of these casualties (para. 41). Explosive weapons - particularly air-launched explosives, improvised explosive devices and ground-launched weapons - were most used in Syria, Iraq and Afghanistan  (para. 41). In other countries like Ukraine, Yemen and the Occupied Palestinian Territory, effects of these weapons included the destruction of hospitals, schools and essential civilian infrastructure like water and electricity systems (para. 42), causing displacement and further perpetuating conflict.

According to the report, the widespread use of such weapons has also extended to camps for refugees and internally-displaced persons in Nigeria, Iraq, the Democratic Republic of the Congo and the Central African Republic. In response to this increasing militarisation of camps, the Secretary-General underscored the need for parties to the conflict to ‘maintain the civilian and humanitarian character of camps and settlements’ (para. 18), particular where the number of refugees crossing borders have increased in these regions. In a similar vein, the report also discussed the increasing politicisation of humanitarian aid. In particular, bureaucratic impediments in Iraq, Myanmar, Nigeria, Syria, Yemen and other conflict areas, have continued to impede the success of humanitarian programming and activities, making them either cumbersome or impossible (para. 21). In the Occupied Palestinian Territory, for example, humanitarian access to the Gaza Strip continue to be restricted on security grounds, compromising the delivery of critical humanitarian services to vulnerable persons (para. 21). In light of this, the Secretary-General urged all Member States to recognise that humanitarian action must remain distinct from political or military objectives and be conducted in line with the principles of humanity, impartiality, neutrality and independence.

The Secretary-General also highlighted that certain counter-terrorism measures which incorporate lengthy administrative processes, or legislations that criminalise activities necessary for humanitarian operations, continue to impede the quality of humanitarian work in conflict areas (para. 22). He called for Member States to align their security objectives with international law and welcomed the European Union’s March 2017 directive on combating terrorism as an example of good legislation that ‘exempts from its scope humanitarian activities provided by impartial humanitarian organisations recognised by international law’ (para. 22)

The Secretary-General build on recommendations provided in his previous report concerning respect for international law and the promotion of good practices. He highlighted the primary responsibilities of parties in armed conflict to: protect civilians and civilian infrastructure in urban areas; exercise their fundamental legal obligation to respect and protect civilians; and develop good policy and practice at national and regional levels.

At the national level, the report discussed efforts by the governments of Afghanistan, Nigeria and Ukraine to protect civilians in their respective countries. In October 2017, the Afghan government, with the support of the United Nations and the Centre for Civilians in Conflict, adopted a national policy on the prevention and mitigation of civilian casualties (para. 50) According to the report, this had resulted in fewer civilian deaths and injuries from national military and police operations in 2017. Similarly, the Centre for Civilians in Conflict has worked with the Nigerian and Ukrainian government on a national policy on civilian harm mitigation and the establishment of a civilian casualty mitigation team, accordingly (para. 51). The report also praised national efforts to collaborate with the National Red Cross and Red Crescent Societies and the International  Committee of the Red Cross (ICRC) have worked with Governments in adopting laws to protect health care and medical personnel (para. 30)

At the regional level, the Secretary-General lauded the November 2017 Maputo communiqué on the protection of civilians from the use of explosive weapons in populated areas, signed by 19 African states. In the communiqué, parties committed to avoid the use of explosive weapons with wide-area effects in populated areas and to develop a political declaration (para. 43).  The report also noted a similar multilateral effort in the form of the Austrian-led process to achieve a political declaration on the use of explosive weapons in urban areas and the German initiative to discuss the same issue within the framework of the Convention on Certain Conventional Weapons (para. 43). Lastly, the report discussed the UN-assisted establishment of a UN-Joint Force planning cell for the Joint Force of the Group of Five for the Sahel to support operations by including precautionary measures to prevent civilian harm, implementing after-action reviews of incidents involving civilian casualties; and creating monitoring, reporting and accountability mechanisms (para. 53).

Recognising international efforts, the report noted efforts by various UN and international bodies in the protection of civilians and civilian infrastructure. The Secretary-General praised, for example, the Office for the Coordination of Humanitarian Affairs’ 2017 publication of a compilation of military policies and practices on explosive weapons in populated Areas (para. 44). He noted that the publication drew on tactical directives that had already been developed by the former International Security Assistance Force (ISAF) in Afghanistan and the indirect-fire policy of the African Union Mission in Somalia (AMISOM) to provide guidance on how limiting the use of explosive weapons in certain circumstances strengthens civilian protection (para. 44). Lastly, the Secretary-General echoed calls by the Plan of Action to Prevent Violent Extremism for Member States to ensure that their use of counter-terrorism, military actions comply fully with international humanitarian and human rights law (para. 47).

Reiterating the importance of advancing the priorities above, the Secretary-General provided three recommendations for Member States: