On the 14th of July 2019, peoples' movements from around the world congregated at the People's Forum in NYC for the Ground-Level People's Forum, a counterspace to the High-Level Political Forum on Sustainable Development. The event was co-hosted by the Asia Pacific Forum on Women's Leadership and Development, the Women's Major Group, and the Asia Pacific Regional Civil Society Engagement Mechanism. At the GLPF, activists came together to discuss the system change that is required for sustainable development to happen. Throughout the day, there were panels on tax justice, indigenous movements, and on the SDGs under review at the 2019 HLPF (SDG 4 on education, SDG 8 on decent work, SDG 10 on reducing inequalities, SDG 13 on climate action, and SDG 16 on peaceful, just, and inclusive societies). 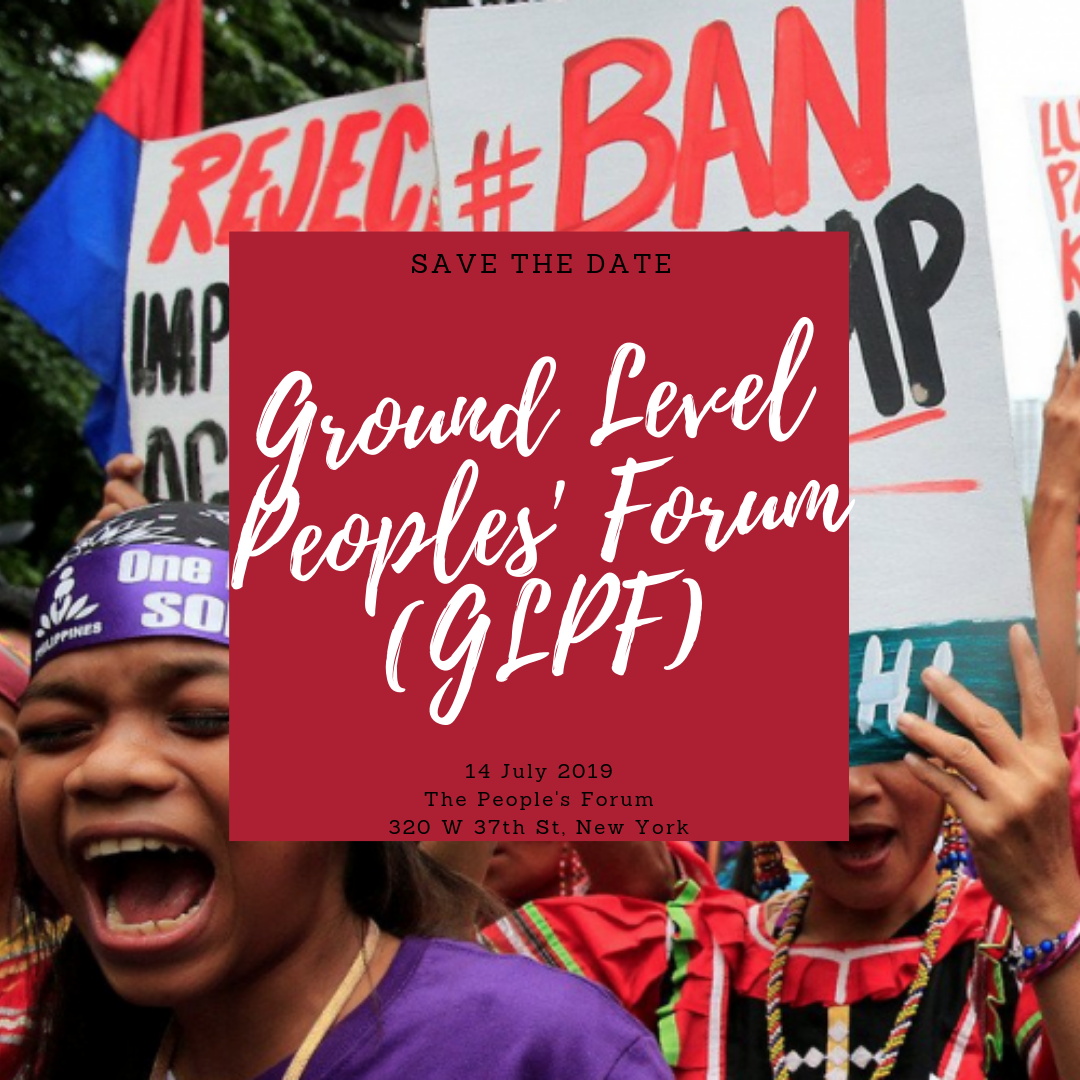 At the breakout session on SDG 16, Sylvie Ndongmo, president of WILPF Cameroon, presented about the work that WILPF Cameroon is doing surrounding arms control, conflict prevention, and elections. She stated that "There are structural barriers throughout Africa to peace. These include patriarchy, militarism, political instability, and fights over natural resources...We need to look for ways to hold our governments accountable. If we Move the Money from war to peace, I am sure that we can make real progress on the SDGs by 2030."

Following the discussion sessions, there was a march from the People's Forum to Dag Hammarskjold Plaza. Activists rallied around the call, "From New York to the Global South, hands up, fists up, for system change"!

Peoples' movements based in New York and the Global South invite you to Ground Level Peoples' Forum (GLPF) - a counter-space to the United Nations High Level Political Forum (HLPF).

Interactive and full of exciting cultural workers and mobilisation, the GLPF will bring together civil society and peoples’ movements to share our struggles and resistances, and hold our governments accountable for the commitments that they have made for sustainable development.

The High Level Political Forum, to be held this July 9 to 18, is a gathering of world leaders to monitor the implementation of the Sustainable Development Goals. This year, HLPF will discuss the issues on decent work, economic growth, education, inequalities between and within countries, financing, climate change, wars and conflict, human rights, among others. 47 countries - both from global north and global south - will present their national report on the progress of SDGs, including Philippines, Indonesia, Fiji, Cambodia, UK, Israel, Timor Leste, Guatemala, Ghana, etc.

Meant to address structural inequalities, SDGs still fall short in confronting the root problems of working class and grassroot peoples of the world. Under the guise of SDGs, the United Nations continues to perpetuate neoliberal and imperialist policies, facilitating the expansion of the corporations and paving the way for unaccountable public-private partnerships that cement corporate power rather than serve the interests of the majority of people.

Don't miss this opportunity to envision the world we want with local and international grassroots activists!