CANCELLED - Feminist Alternatives: Challenge Militarism to Save our Planet

****Please note that as of 2 March, due to concerns about the spread of COVID-19, all CSW64 parallel events have been cancelled****

Anthropogenic greenhouse gas emissions are at the highest levels in history, the atmosphere and oceans have warmed, snow and ice cover have diminished, and sea levels have risen. Global military spending exceeded $1.8 trillion USD in 2018, and conflicts have become more protracted over the past few decades. Global capitalism and its manifestation in neoliberal policies continue to demand infinite growth from finite resources, wreaking havoc on the political, social and economic infrastructure critical for protecting our communities. Private companies and governments are uniting to develop new technologies of violence such as autonomous weapons and armed drones. And while private power increases, the role of governments is evolving: many states are moving away from their mandate of social protection and further towards repression, surveillance, and militarized security. Even governments who express support for human rights and international humanitarian law undermine these commitments by their arms trading and investments in military strength. 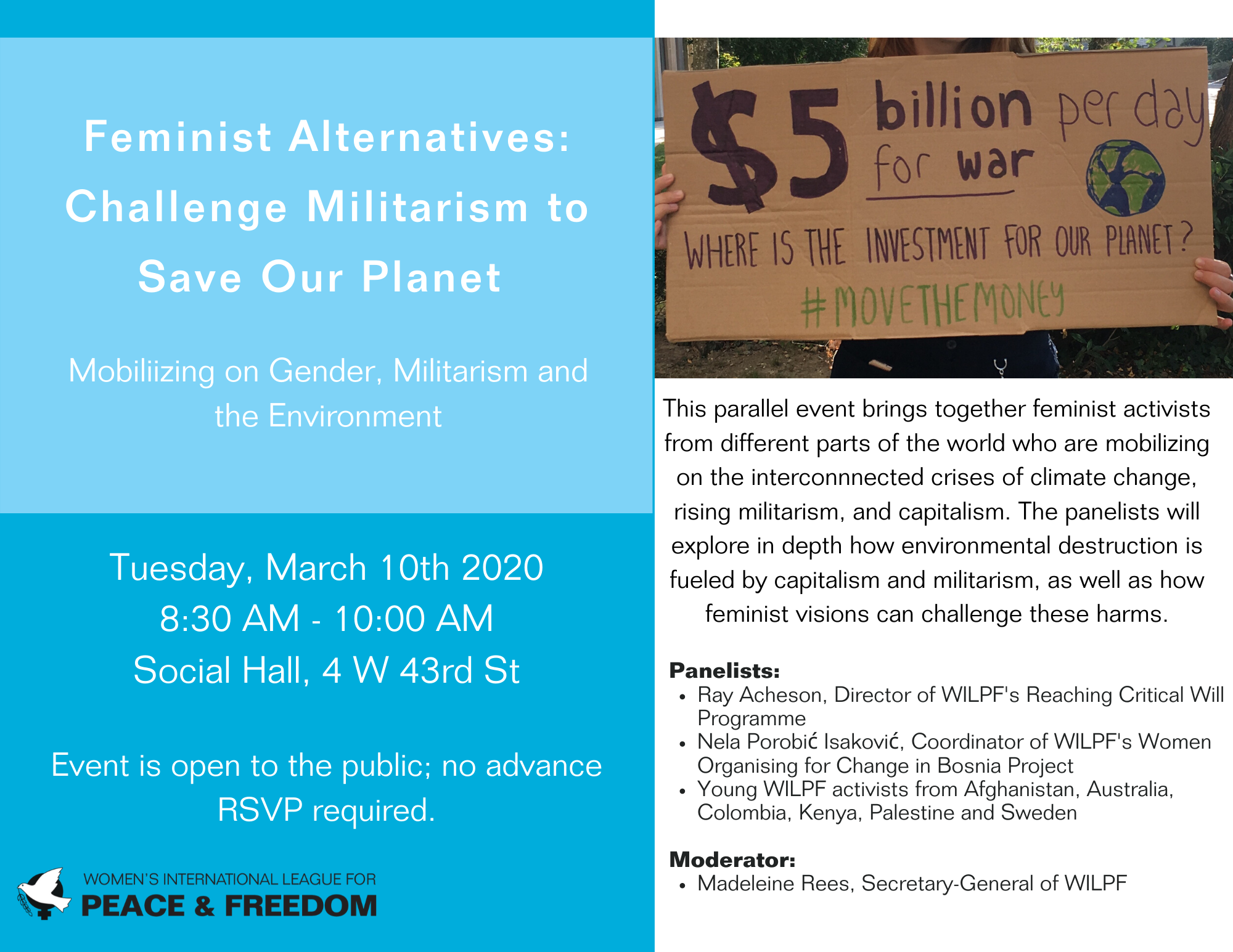 These issues are all linked. Global capitalism has helped fuel the climate crisis and environmental destruction, and has exacerbated inequalities. Climate change has a disproportionate effect on marginalized groups, including the poor, women, and indigenous peoples. Inequalities lay at the roots of conflict and violence, and militarism’s ideology of violent power and domination harm both people and planet. Military production, consumption, exercises and war are intensive, greenhouse gas-emitting accelerators of climate change and extreme weather events. In Australia, for example, where bushfires have been waging horrific destruction across the country, key political leaders deny climate change, and have gutted public services that would alleviate the effects of climate crisis.

In 2020, as we face the convergence of these systems of destruction, people throughout the world are rising up in response. There is increased recognition that “business as usual” means continued destruction and violence, and that the current system must be transformed.

Feminist movements have long noted the importance of addressing interconnected systems of power in order to eliminate inequalities. This side event brings together feminist activists from different parts of the world to discuss how feminist movements can respond to these interconnnected crises of climate change, rising militarism, and capitalism. The panelists will explore in further depth how environmental destruction is fueled by capitalism and militarism, as well as how feminist visions can challenge these harms.

The discussion will be opened and moderated by Madeleine Rees (WILPF’s Secretary-General), who will introduce the panelists and guide the conversation.

Ray Acheson (Director of WILPF’s disarmament program, Reaching Critical Will) will connect WILPF’s anti-capitalist history to its anti-military history, shedding light on how military activity is intertwined with and contributes to climate change and environmental degradation.

Bringing forward the Bosnian experience and analysis, Nela Porobić Isaković (Coordinator of WILPF's 'Women Organising for Change in Bosnia' project) will highlight the impact of neoliberalism on post-conflict society, women and the environment.

Young WILPF activists from Afghanistan, Australia, Colombia, Kenya, Palestine, and Sweden will share their experiences working on the intersections of environment and conflict, including food insecurity, nuclear testing, pollution, and water shortage.

This conversation will connect women, enabling them to share stories, information and strategies—discerning what works and what doesn’t— and develop real solutions that will empower them to take decisive action towards prevention of a climate apocalypse.