The High-Level Summit on Refugees and Migrants: WILPF/PeaceWomen Analysis

The High-Level Summit on Refugees and Migrants

On 19 September, 2016, the United Nations General Assembly hosted the High-Level Summit on Refugees and Migrants with the aim of bringing countries together behind a more humane and coordinated approach to the crisis. The high-level summit marks a historic event. It is the first time when world leaders came together to address the international response to refugee crises and adopted the New York Declaration on Refugees and Migrants. In endorsing the 90-paragraph Declaration, the representatives of Member States agreed to a set of commitments and acknowledged a shared responsibility to manage large movements of refugees and migrants in a humane, sensitive, compassionate and people-centred manner. They agreed to strengthen international cooperation while recognising the varying national capacities and resources in responding to those movements. To foster the urgent need for action, the Secretary-General Ban Ki-moon launched a new global campaign called “Together — Respect, Safety and Dignity for All”. Moreover, the speakers highlighted the importance of safe, orderly, and regular migration and acknowledged the benefits of accepting migrants into host countries. Even though the significant progress in fostering gender justice has been noted, the speakers prioritised the discussion around the importance of public services and human rights missing to acknowledge the need to foster women’s participation and empowerment in addressing the refugee crisis and prevent the increased militarisation of conflicts. 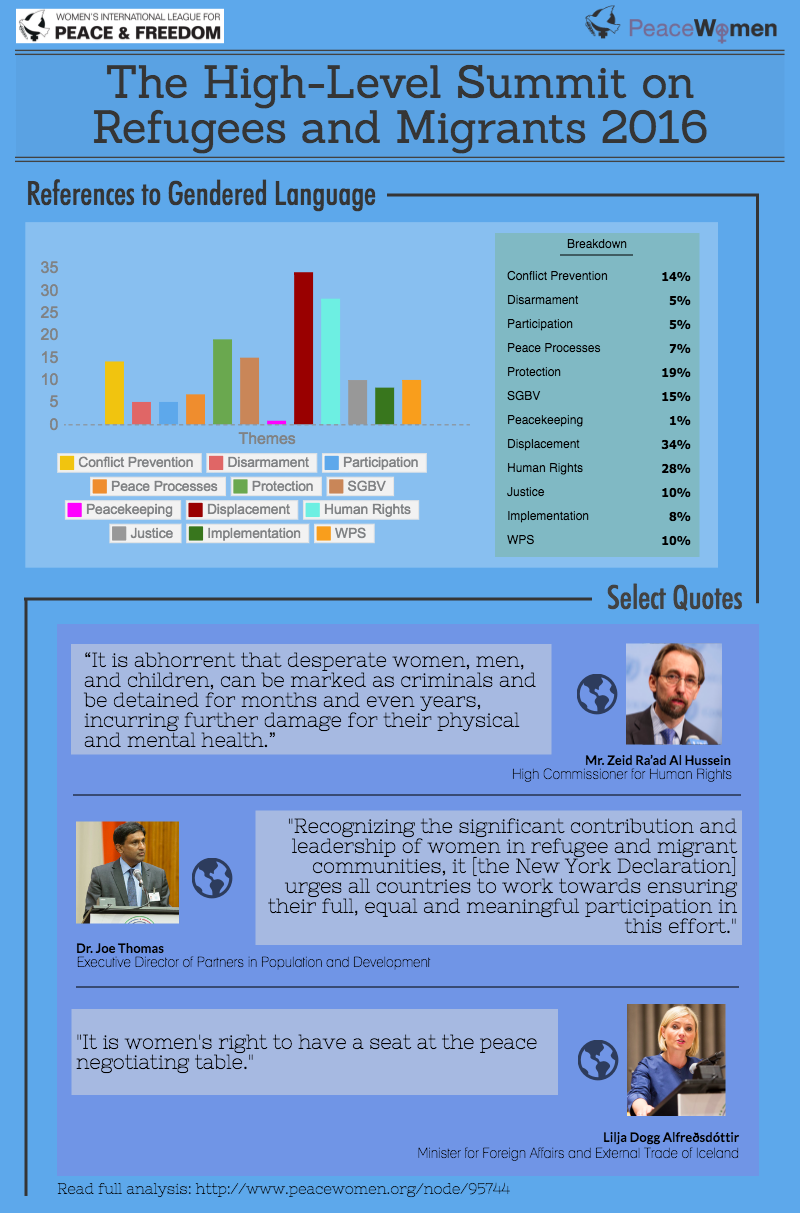 “We are living on the edge of hell,” Mohammed Badran, of the Syrian Volunteers in the Netherlands, describes the grim situation of refugees. While waiting for the international response, refugees are already taking actions to prevent their lives from being put “on hold.” The international community should do the same, he believed. In the same vein, Eni Lestari Andayani Adi, Chairperson of the International Migrants Alliance, said:  “We [the migrants] are the people who have been denied the future, the rights and the dreams we used to imagine.”

The UN Secretary-General Ban Ki-moon urged Member States to join the “Together — Respect, Safety and Dignity for All” campaign. “Today’s summit represents a breakthrough in our collective efforts to address the challenges of human mobility,” he said, adding that the 2030 Agenda for Sustainable Development was advancing the same principles as the Declaration, with the common goal of leaving no one behind. In the same vein, Peter Thomson, President of the seventy-first session of the General Assembly, also expressed hope that the new campaign would help to overcome the hostile and hateful rhetoric that some refugees and migrants were facing.

“I wished that the rapes I endured by twelve terrorists were twelve bullets in my flesh,” said Nadia Murad Taha, Goodwill Ambassador for the Dignity of Survivors of Human Trafficking to the United Nations Office on Drugs and Crime (UNODC). As a survivor of the Yazidi genocide, she invited world leaders to address the root causes of migration, end terrorism, and stop the instability.

The call to address the root causes of large migrations and the need to maintain refugee’s rights when they are immigrating to a new country was the most prevalent among the speakers. “Addressing the root causes of large and long-term movements of refugees and migrants should be at the core of the international community’s strategy,” said Nicos Anastasiades, the President of Cyprus. Speaking on the need to uphold the rights of refugees, the President of Egypt said that “refugees enjoy a treatment equal to Egyptian citizens in matters of education, health, housing, and benefiting from the subsidies to the food products”. Most speakers also agreed that refugees must be given basic services in order to help integrate them into the new societies.

In addition, most speakers acknowledged the benefits of migrants to their countries, including their professional skills and diversity. They agreed that migrants are an essential part of a country’s identity. Dominique Prince de La Rochefoucauld-Montbel, Minister of Health and International Cooperation of the Sovereign Order of Malta, expressed the importance of respect for human dignity and the value of the family “Politicians must take a responsible role and explain to their electorates the benefits of migrants and refugees as an indispensable resource for economic growth,” he said.

Out of nearly 121 statements delivered, less than 20% of the speakers were using gendered language. Acknowledging that women continue facing discrimination and the lack of access to human rights, nearly 30% of speakers have discussed the need to protect the human rights of all refugees and migrants. Enrique Pena Nieto, President of Mexico, emphasised the undeniable contribution of migrants to their host countries. He discussed the need to develop a shared responsibility, ensure human rights, and develop a framework for the safe and orderly flow of migrants. The scale of human displacement has been acknowledged by 28% of the speakers. In this regard, the representative of Lebanon called the current situation in his country as “the worst crisis of forced population displacement in history” that poses serious problems for his country’s stability, security, economy, and public services.

The issues related to sexual and gender-based violence were discussed infrequently (less than 15%). Mr. Ahmed Barwary, Ambassador of the Foreign Ministry of Iraq, was one of the few who spoke on the importance of psychological rehabilitation for women and girls who have been raped or mistreated.

Women’s participation was one of the least discussed topics at the summit. Only 5% of representatives mentioned the participation during their remarks. Ms. Lilja Alfredsdottir, Minister of Foreign Affairs and International Trade from Iceland was one of the few who acknowledged participation as a women’s right. “First and foremost, it is women’s right to have a seat at the peace negotiating table-equal to that of men,” she said.

It is frustrating that the issues of disarmament and conflict prevention along with the need for increased women’s participation remained under-prioritised. Women’s participation in politics and peace processes has been proved effective in addressing militarism and promoting a non-violent response to solving disputes and conflicts; therefore, it is disturbing to note the lack of attention given to this issue when discussing the current situation in the world. The lack of disarmament language is also a problem. When addressing the root causes of large movements of migrations, terrorism and war are often the common denominators. “We must increase our efforts to prevent and resolve conflicts, to prevent displacement, and to facilitate the voluntary and safe return of refugees. We need sustainable peace,” said Peter Maurer, President of the International Committee of the Red Cross. Sustainable peace will remain a challenge until world leaders stop prioritising their own geopolitical interests at the expense of the gender-sensitive agenda.

The High-Level Summit on Refugees and Migrants: WILPF/PeaceWomen Analysis

RefugeeSummitAnalysis (4).pdf
BACK
TO TOP