'If We are Serious About Peace and Development, We Must Take Women Seriously'

This article by Ambassador Anwarul K. Chowdhury for SDGs for All addresses why women need to be included in the peace process. He also lists the problems that are faltering this progression and explains his reasoning. 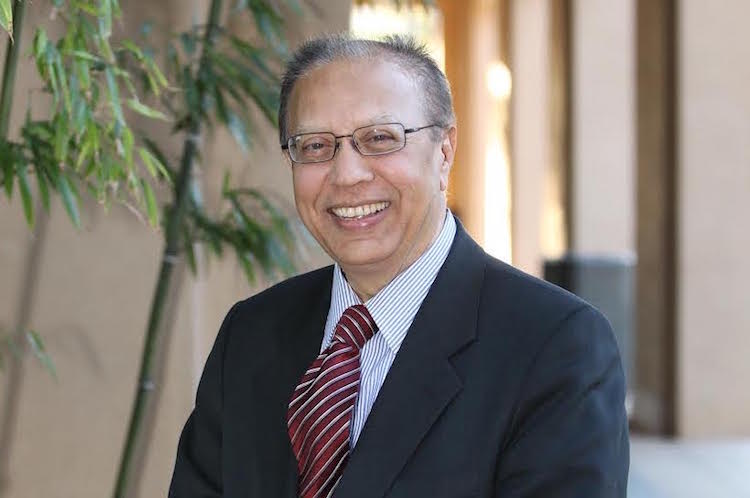 Without peace, development is impossible, and without development, peace is not achievable, but without women, neither peace nor development is possible, writesAmbassador Anwarul K. Chowdhury, former Under-Secretary-General and High Representative of the United Nations. He is an internationally recognized initiator of the UNSCR 1325 as the President of the UN Security Council in March 2000.

NEW YORK (IDN) - The biggest annual gathering of activists on women’s issues from all parts of the world converging at the United Nations ended on March 24 after its two-week meeting. That gathering is the regular sessions of the Commission on the Status of Women. This year it was the Commission’s 61st session (UN CSW 61). Many of the participants at these sessions have direct grassroots connections with their feet on the ground and understand the challenges and obstacles – physical, economic, political, societal, cultural and attitudinal – which women face on a daily basis.

UN Women press release issued after the conclusion touted: “This year’s Commission drew the attendance of 162 Member States, including 89 representatives at the Ministerial level. More than 3,900 representatives from 580 civil society organizations came to New York from 138 countries, attesting to the growing strength and unity of women’s voices around the world.”

Yes, the UN premises and its neighbourhoods were bustling with these CSW participants, but most of them were outside the conference room where the formal deliberations on the agenda of the Commission’s annual session were taking place. Most of them were frequenting the four dispersed locations outside the UN building where the NGOs-organized 450 parallel events were being held with eminent contributions on wide-ranging issues having significance and relevance for women and for the humanity as a whole.

The representatives of Member States had no time or even interest in benefitting from such valuable perspectives and real-life experiences. There was a clear disconnect between the intergovernmental process at the CSW and the deliberations which engaged the civil society representatives. One NGO voice lamented: “Women from the Global South have been denied access to the UNCSW for the most racist and xenophobic reasons over the years.”

UN DPI recognized NGOs could not have access either. This disconnect is proving very costly in advancing the women’s agenda as articulated by CSW. This does not augur well for the CSW process and should be addressed comprehensively and jointly by Member States, civil society and UN secretariat.

In addition, there is a second disconnect which somehow separated globally engaged NGO representatives from the grassroots civil society representatives from the vulnerable countries. This lack of interface has the potential of undermining the women’s solidarity, which is need of the hour as there is a roll back of the gains for women made since theBeijing women’s conference in 1995.

This year’s CSW session and challenges it faced is succinctly expressed in the Open Democracy report of March 23 by Nazik Awad articulating: “The accomplishments of the women’s rights movement over the last five decades are now in danger from closed borders and rising intolerance. Gender justice cannot be achieved without the strength of women’s solidarity around the world. Women’s rights groups all over the globe are challenged to fight; not just for the causes they support, but for their mere existence. Authoritarianism, fundamentalism, populism, and terrorism are dominating more countries every day, while women’s rights groups find their workspace shrinking locally and globally.

"Grassroots women’s movements in conflict and unstable countries are being suffocated under hostile working conditions. Without the solidarity and support from more established women groups in the developed countries, the women’s movement will slowly vanish, and lose all ground gained over the last decade.”

A third disconnect is more inherent and long-standing – a clear absence accompanied by considerable disinterest of men in the CSW deliberations. Among the nearly 4000 NGO participants and Member States, CSW does not get the attention and importance, which it deserves from men.

Men fail to connect CSW deliberations on women’s issues as having in turn the most comprehensive impact on the global agenda for peace, development and human rights. On the other hand, men who are visibly active in the CSW agenda are mostly there to subvert women’s equality and empowerment. No human endeavour is meaningful and worthwhile unless it has women at its center and it is essential for men to understand that sooner rather than later.

With “Women’s economic empowerment in the changing world of work” as the priority theme of the session, the deliberations focused on areas from equal pay and women’s unpaid work to decent work, removing the barriers of discrimination and investing in women’s access to digital and green economies.

OXFAM International’s March 2, 2017 report 'An economy that works for women' injected fresh intellectual energy throughout the various CSW 61 events. Its assertion that “women across the globe are facing new threats, which risk dismantling decades of hard-won rights and derailing the effort to end extreme poverty … progress towards women’s equality risks going into reverse, something that will make it impossible for world leaders to end extreme poverty by 2030” was repeated most often. 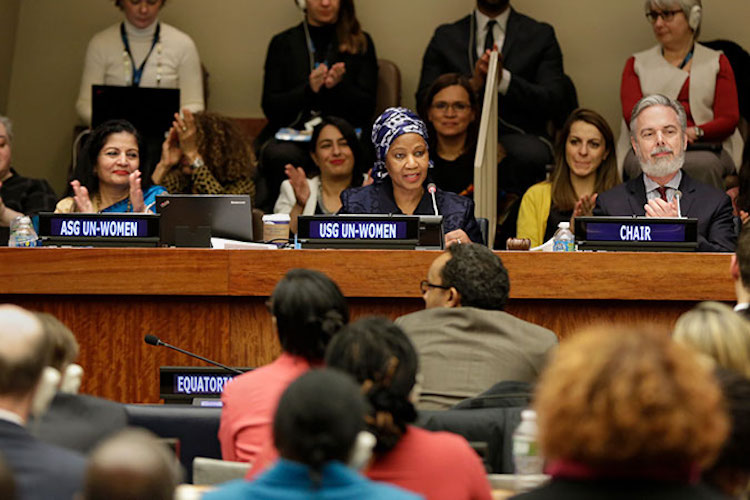 Closing of the 61st session of the UN Commission on the Status of Women. Credit: UN Women/Ryan Brown.

OXFAM has projected that “At current rates, the time it will take to close the 23 per cent global pay gap between men and women stands at 170 years – 52 years longer than it would have done just a year ago. And, over the past five years, donor funding directly to women’s rights organizations has more than halved. All of this risks putting women’s rights in reverse”, urging that “everyone has a part to play in ensuring this rollback on women’s rights does not happen.”

Despite years of efforts, according to OXFAM, “gender inequality in the economy is now back to where it stood in 2008 and millions of women around the world continue to face low wages, a lack of decent, secure jobs and a heavy and unequal responsibility for unpaid care work, such as housework and childcare.” The cost of inequality imposes enormous burden on society, which in economic terms reaches up to 9 trillion dollars in developing countries. The global value of women’s unpaid care work each year is estimated at 10 trillion dollars.

Although nearly half the world’s agricultural labour force is female, OXFAM report noted, women own less than 20% of agricultural land. At the same time, 60% of chronically hungry people on the planet are women or girls. We cannot reach the global objective of Zero Hunger without women. Facing this reality of uphill challenges which often mutate and reappear, can we really say that “now we are seeing a healthy intolerance for inequality grow into firm and positive change” as the head of UN Women announced in her statement at the conclusion of the session.

Despite immense hurdles, I believe CSW 61 made considerable gains in continuing to highlight the proactive measures needed for girls side by side with women. The special attention given to the role of media, cyber-based violence and digital equality is also worth noting.

At the same time I strongly believe that the two areas which should have received attention of CSW 61 are UN Security Council Resolution 1325 on “women and peace and security” and the joint proposal made by the President of the 66th session of the UN General Assembly and the Secretary-General of the United Nations on March 8, 2012 for the convening of a Global Conference on Women by the United Nations in 2015, twenty years after the last women’s summit in Beijing.

They emphasized: “Given that women compose the half of humanity and the inherent importance and relevance of women issues for the global progress, it is high time that such a world conference is convened, more so as the world is going through enormous changes in all fronts having both positive and other implications for women.”

This proposal needs to be revived and revised to schedule the fifth women’s conference in 2020, 25 years after Beijing. UN Women being the lead in the implementation of UNSCR 1325 should take advantage of the fact that adoption of 1325 has opened a much-awaited door of opportunity for women.

Secretary-General António Guterres in his message on the International Women’s Day said very rightly that “The truth is that north and south, east and west – and I’m not speaking about any society, culture or country in particular – everywhere, we still have a male-dominated culture.”

It is a shame that in the second decade of the 21st century widespread discriminatory norms and practices against women remain deeply rooted. Structural barriers and social and economic inequities hinder gender parity in national governments around the world. Political participation, legal discrimination including land rights and inheritance, business ownership are areas which need determined strategic interventions for equality.

Of course, we should not underestimate the importance of sexual and reproductive rights, which were the most controversial issues in Beijing and still stir the biggest controversy in UN negotiations. Also, eradication of poverty is the first and foremost concern of women since the majority of the poor in the world are women, and the feminization of poverty is a reality in poor and rich countries alike. The increasing militarism and militarization have made these even worse.

Empowering women’s political leadership will have ripple effects on every level of society and the global condition. When politically empowered, women bring important and different skills and perspectives to the policy making table in comparison to their male counterparts.

One inspiring lesson that I have learned in my life is that we should never forget that when women – half of world’s seven point two billion people – are marginalized, there is no chance for our world to get distributive development and sustainable peace in the real sense. While women are often the first victims of armed conflict, they must also and always be recognized as key to the resolution of the conflict. It is my strong belief that unless women are engaged in advancing the culture of peace at equal levels with men, sustainable peace would continue to elude us.

Transformative change for women’s equality and the culture of peace will not happen without personal commitments by every one of us. Let us focus on getting rid of gender inequality and prejudice and discrimination against women from our mindset and also from real-life situations. Inequality will continue and even flourish without any effort because the culture favors that. Action is needed only when we want to get rid of it.

The Charter of the United Nations, when signed in 1945, was the first international agreement to affirm the principle of equality between women and men. Since then, the UN has helped create a historic legacy of internationally-agreed strategies, global legal frameworks, standards, programmes and goals to advance the status of women worldwide.

In his address to the CSW 61 as it opened on March 13, 2017, promising women’s true equality, Secretary-General Guterres asserted that “We need a cultural shift – in the world and our United Nations.” Let us all wish him success in achieving that as that by itself could be his legacy.