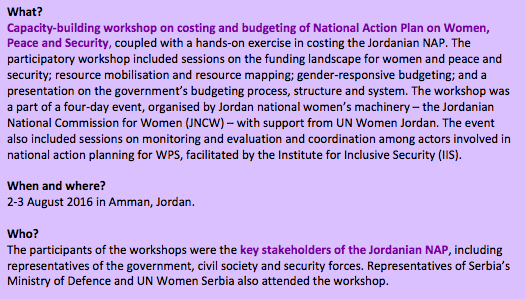 National Action Plans for the implementation of UNSCR1325 and supporting resolutions (NAPs) are one of the key implementation tools for the WPS agenda. Yet, as of 2016, only 12 out of 63 existing NAPs have a dedicated budget. Recognizing that lack of dedicated funding and strong, transparent financing mechanisms is a key obstacle to the implementation of the WPS agenda globally, Global Network of Women Peacebuilders (GNWP) and Cordaid in collaboration with UN Women developed a workshop module for costing and budgeting the second phase of Georgia’s NAP. In August 2016, GNWP rolled out the module in Jordan, in coordination with UN Women Jordan and JNCW.

Jordan began the process of drafting a NAP in 2010. In September 2015, the Government of Jordan committed to accelerating the adoption of the NAP. Welcoming this commitment, the JNCW in collaboration with UN Women initiated a participatory process to develop and implement a Jordanian NAP. In this context, UN Women Jordan invited GNWP to provide technical expertise in costing and budgeting the NAP.

With help of local experts, GNWP adjusted the module developed in Georgia to fit the local reality and the needs of the Jordanian NAP. The workshop was divided into two days. During the first day the participants developed their knowledge and capacity on NAP costing, gender-responsive budgeting and the Jordanian government budget cycle. The second day was focused on a practical exercise, during which the participants began the actual costing of the NAP.

To ensure the successful finalization of the costing process initiated during the workshop, GNWP recommended that a smaller team be assigned to ensure that all activities are specific and actionable enough and to finalize the NAP budget. GNWP continues to lend its support to the Jordanian stakeholders as they move ahead with the development of a NAP budget.