Security Council Debate on the Situation in the Middle East, Including the Palestinian Question, July 2012

On 25 July 2012, the Security Council held an open debate on the situation in the Middle East. The discussion was primarily focused upon the two-State solution for Israeli-Palestinian peace and the Syrian crisis. The debate, which occurs on a quarterly basis, did not result in the adoption of an outcome document.

The debate featured 42 statements, including those from the Special Coordinator for the Middle East Peace Process, the Permanent Observer of Palestine to the United Nations, the Chairman of the Committee on the Exercise of the Inalienable Rights of the Palestinian People, the permanent and non-permanent members of the Security Council, and 22 other member states. As is often true with discussions on this topic, there was little attention paid to the gendered dimension of the situation in the Middle East: only 5 out of 42, or 12%, of statements referenced gender.

The debate was largely inattentive to the gender-specific impact of the situation in the Middle East. However, a few speakers did emphasize the need to protect women and children from the violence occurring in the region. Australia stressed that civilians—especially women and children—bear the brunt of the violence in Syria and must remain in the forefront of discussions as the international community aims to create a solution. Similarly, the Non-Aligned Movement drew attention to the “violent actions by Israeli settlers against…Palestinian civilians, including women and children.”

The debate's most gender-conscious statement was delivered by the Chairman of the Committee on the Exercise of the Inalienable Rights of the Palestinian People, who highlighted the crucial relationship between women, peace, and security. The Chairman noted that, in working towards the shared goal of a two-state solution, the Committee has held meetings to focus on the role of women in support of peace. It is disappointing that the Chairman was the only speaker to address women's ability to positively impact Middle East peace processes. Speakers could have used this debate as a forum to discuss women's crucial participation in the region's reconciliatory talks; their failure to do so is an upsetting missed opportunity.

The debate predominantly focused on the prospect of Israeli-Palestinian peace. In observation of this past month's efforts to restart talks between the two parties, Special Coordinator for the Middle East Peace Process Robert Serry noted that the deliberations had “not reached a breaking point, but there had not been a breakthrough either.” The debate broached several contentious topics including: the release of Palestinian prisoners, Israel's settlement activity, the recent terrorist attack targeting tourists in Bulgaria, and the blockade on Gaza. In response to these issues, most speakers reaffirmed support for a two-State solution and called for the reconvening of direct negotiations.

Israel argued that the debate's focus on its relations with Palestine diverted attention from other core challenges to the region. Listing a catalogue of human rights abuses that occur in Iran, Palestine, and Lebanon, Israel urged speakers to stop using discussion of Israel to “sweep these important issues under the carpet.” 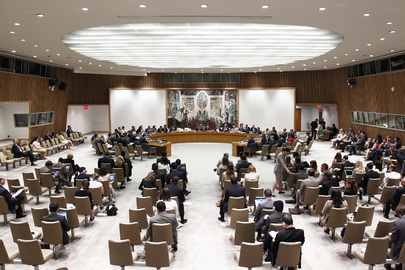 However, contrary to Israel's assertion, many speakers also discussed the situation in Syria. France and the United States condemned the Council's failure to appropriately respond to the Syrian crisis, reprimanding Russia and China for using their veto power to halt effectual action. Arguing that that the Assad regime had lost legitimacy by terrorizing the Syrian people, Canada advocated for universal and binding sanctions to pressure the President to honor his commitments. Several other speakers reiterated this call for action and offered support for Special Envoy Annan's Six-Point Plan. Ultimately, as Pakistan stressed, political will is needed to work towards peace in the Middle East.

UN and civil society representatives at the debate included: Special Coordinator for Middle East Peace Process Robert Serry, the Permanent Observer of Palestine to the United Nations, the European Union, the Non-Aligned Movement, and the Chairman of the Committee on the Exercise of the Inalienable Rights of the Palestinian People.

Press Release: Open Debate on the Situation in the Middle East