Overall there was a positive reaction to the debate on Children and Armed Conflict, with most countries supporting the Secretary-General's report, including the listing and delisting of perpetrators, the inclusion of the maiming and killing of children and sexual violence and rape into the Monitoring and Reporting Mechanism, and the statement made by Radhika Coomaraswamy, the Special Representative to the Secretary General at the outset of the debate.

All countries were in agreement that the issue of abuses against children must end, and that the Security Council, the Working Group on Children and Armed Conflict, and the international community all have roles to play. With regards to the mention of women and gender issues, 30 of the 57 speakers discussed the vulnerability of women and girls and or the sexual violence and rape that they are so often the victims of in cases of armed conflict, or in post conflict societies. The speakers that most highly emphasized the importance of the recognition of rape and sexual violence against women and/or girls were: Turkey, Japan, Switzerland, Lichtenstein, Finland, Afghanistan, Armenia, Indonesia and Hungary. Special attention must be given to the comments made by Indonesia. Despite calling for transparency on gender issues and the integration of gender experts in cases of armed conflict, the ambassador continued, stating that war affects all children, regardless of gender and that boys and girls suffer the same, “armed conflict does not make gender distinctions.” 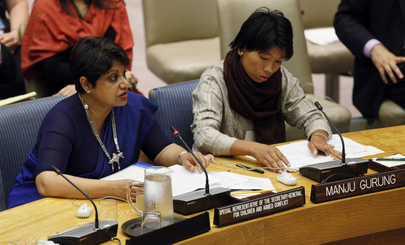 Radhika Coomaraswamy (left), Special Representative of the Secretary-General for Children and Armed Conflict, addresses the Security Council at its meeting on that issue. At right is Manju Gurung, a young Nepalese, who also addressed the Council, recounting her ordeal of abduction by Nepal's Maoists at the age of 13. (UN Photo/John McIlwaine)
Resources: