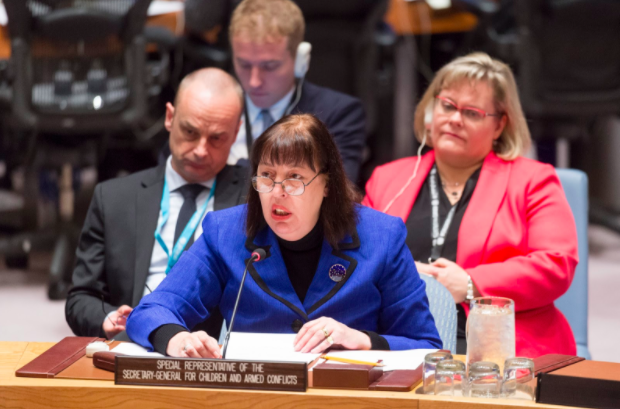 On Tuesday, 31 October 2017, the Security Council held an open debate under the theme “Children and Armed Conflict,” under the French presidency. The debate reflected the findings of the 2017 report on the Secretary-General on Children and Armed conflict. The discussion focused on stressing the challenges non-State armed groups pose, including terrorist groups, as well as the protection of children in armed conflict situations. Member States highlighted several relevant themes, including the use of child soldiers and their status as victims and fighting impunity for perpetrators. Speakers recognised the importance of international law in order to respond to this problem, but did not provide specific action points. Despite the fact that many speakers discussed the human cost of conflict, few speakers discussed disarmament or the need to address the root causes of conflict, contrary to the ongoing reform work within the UN System. Additionally, few speakers provided gender analysis of the situation of children in armed conflict and failed to mention that girls face different risks than boys.

In 2016, violations against children in conflict, including recruitment and killing, were at an alarming level, said Secretary-General Antonio Gutierrez. Armed groups using children in their terror tactics is not a new challenge, but it is significant and increasing in violations, year after year. There were the highest amount of children casualties in Afghanistan ever, and recruitment in Syria and Somalia were high. Additionally, there were high instances of sexual and gender-based violence and exploitation in the DRC, Nigeria and South Sudan. Member States heavily emphasised the need to protect children from sexual violence.

The debate was an opportunity to discuss how to prevent the recruitment and use of children by non-State armed groups, and fighting indoctrination of children on the path to violent extremism. Using child soldiers is a moral and ethical issue that robs children of their innocence, said Mubin Shaikh, Romeo Dallaire Child Soldiers Initiative. He briefed the Council and described how he  sees children and teens exploited by extremism; recruitment is systematic and intentional, as it is easier to coerce and indoctrinate children. The most effective way of dealing with this issue, according to him, is through prevention, rather than addressing trauma and indoctrination after the fact.

Participants listed several positive measures undertaken by governments and armed groups. Five governments and four armed groups are executing positive measures, including releasing children from prison and from armed groups. Participants noted other government achievements from the last 20 years, including the International Conference on Children Involved in Armed Forces and Armed Groups, the adoption of the Principles and Guidelines on Children Associated with Armed Forces or Armed Groups and the Paris Commitments to Protect Children from Unlawful Recruitment or Use by Armed Forces or Armed Groups. These are government commitments to end the unlawful recruitment or use of children by armed forces or groups through international cooperation and and the implementation of relevant instruments. Virginia Gamba de Potgieter, Special Representative of the Secretary-General for Children and Armed Conflict, stated that Member States’ additional commitments bring hope, in this case the Paris Principles and the Safe Schools Declaration. Several countries have made positive advances to combat the use of child soldiers, including the Nigeria Action Plan, the Moro Islamic Liberation Front releasing children and the peace agreement in Colombia.

The UN and Member States called for increased accountability for violations of the rights of children. Gambia said the most effective way to prevent violations against children is conflict prevention, resolution and peace. Uruguay called for the inclusion of child protection provisions in peace dialogues, and added that 43 states do not have 18 years old as the minimum age for the military. Member States focused heavily on the role of international law to end impunity, although many simply called for all countries to respect international humanitarian and human rights law and did not provide further information. Uruguay and Italy both mentioned that the International Criminal Court plays an important role in accountability, and that states must adopt and implement legal measures to criminalize the use of children in conflict for both Member States and non-state actors. “It is not realistic to end armed group’s recruitment when states still recruit children,” said the representative of Uruguay. Member States also called on others to ensure that their trial procedures were consistent with international law on juvenile justice.

In the absence thereof, it is imperative to comprehensively identify real actions to address the impact of armed conflict on children. Some speakers believed that the Council and Member States should address the root causes of children’s suffering by prioritising conflict prevention, disarmament and support for peace processes. Many Member States also listed the need for education, counseling, reunification, “reintegration not punishment” and protection from sexual violence. In terms of education, the use of schools for military purposes or air strikes against schools were denounced.

The impact of conflict of children in Yemen and Syria were most commonly mentioned in the debate, 11 (13.2%) and 12 (14.4%)  times respectively. Both countries were mentioned in the context of child recruitment, casualties from war and education. Gamba and the Secretary-General discussed the use of child recruitment in Syria, as well as the high number of children casualties. Yemen is currently taking some positive steps: they endorsed the Safe Schools Declaration and signed an Action Plan with UNICEF. Yemen also has an agreement to establish a system to register newborns and deaths to avoid underage military applicants. Egypt called for the UN to provide education in times of emergency, and for the international community to provide financial support for conflict countries to restore education agencies to make sure refugee children do not drop out from school. Despite speakers calling for the end of the destruction of schools, only Lichtenstein mentioned the arms and air strikes that lead to this destruction.

A quarter of speakers (25.3%) used gendered language or referred to the effect of conflict on girls versus boys, and when they did, it was in the context of protection, SGBV and sexual exploitation and abuse. The language used referred to girls mainly as victims, rather than actors.

While 70 out of 83 speakers (84%) spoke of the protection of children, only 11 out of 83 (13%) spoke of girl’s protection. 18 out of 83 speakers (22%) spoke of sexual exploitation and gender based violence. Girls living in conflict face unimaginable circumstances. They are kidnapped, trafficked, forcibly married, used as suicide bombers, and subjected to sexual exploitation and SGBV. 40% of children associated with armed groups are female. In this vein, France stated, “non-state armed groups are most responsible for these violations, including sexual violence against girls, marriage by force, forced pregnancies, and the use of slaves, for example the Chibok in Nigeria and Yazidi in Iraq.”  These issues were hardly mentioned in the debate. Without addressing the specific needs of girls, children and adolescents, in the process of reintegration and rehabilitation, successful peace processes and sustainable peace are largely impossible. Adolescent girls have little power in society and face early discrimination. Despite their vulnerabilities, girls are resourceful and often carry out adult tasks in conflict. If the UN and Member States wish to end the use of child soldiers, their strategies will benefit from involving children.

Ireland explained that the WPS Agenda is embedded across its work. The representative added that Civil Society Organisations play a crucial role, and Ireland supports this role by offering assistance on projects related to gender and justice. The United Arab Emirates stated that the full implementation of the WPS Agenda and meaningful participation is integral to respond to children’s needs in conflict.

The value of education for girls, as well as ensuring their further meaningful participation in the society was highlighted by four (4.8%) speakers. For girls, it provides physical protection, as they are less likely to be sexually exploited or married. According to Sweden, guaranteeing the right to education helps build sustainable peace and reduces inequality, especially if girls have access. Providing education, however, is hard to achieve in the context of conflict, when schools are destroyed, turned into shelters for homeless families or used for military purposes. Sweden, Slovakia, European Union, United Arab Emirates

Lastly, 6 out of 83 (7.2%) of countries spoke of conflict prevention, and 3 out of 83 (3.6%) spoke of disarmament. Liechtenstein spoke of the alarming trend of air strikes on schools. Greece, Bolivia and Uruguay called for the end of weapons sales to countries where violations take place. “Member States have a shared responsibility with those who sell weapons to countries where violations take place, and we call on states to immediately stop the sale and export of weapons to parties identified on the Secretary General Report list.” Bolivia said that the best way to protect minors is to address the root causes of conflict, war, insecurity, and trafficking in arms.

Actions are failing to count girls, to take account of their needs or to engage them in decisions that affect them. Girls (and boys) must be part of the solution: girls show intelligence, courage and initiative in conflict and should be encouraged to speak up. Part of this includes the need to meaningfully consult with girls at all stages of a conflict in order to identify their needs, and solutions must be implemented with their participation and feedback. To encourage girls to speak up, there must be more gender equality in conflict and humanitarian fields; having more women around will encourage girls to speak up.

It is also important to end impunity for crimes against girls, including recruitment and sexual exploitation. There are several ways to take steps towards this, including establishing special investigative police units for crimes against children and girls, and ensuring law enforcement agencies receive training to respond to reported cases of sexual violence. In prevention strategies, they must consult with girls and educate men and boys. Organisations and states must make sure that teams working in conflict are gender-balanced, their planning is gender-sensitive and that they include girls in their assessments. They must also collect sex and age disaggregated data. States have other steps they can take, including having adequate security in refugee camps (for example lights in bathroom facilities), strengthening birth registration systems and vital statistics in order to hold recruiters accountable and including legislation with specific measures for girl’s protection.