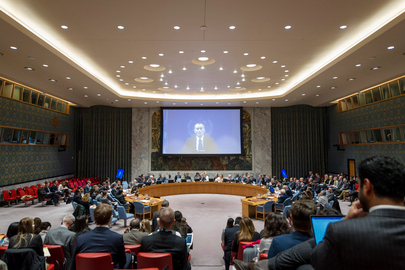 A wide view of the Security Council Chamber as Nickolay Mladenov (shown on screen), UN Special Coordinator for the Middle East Peace Process and Personal Representative of the Secretary-General to the Palestine Liberation Organization and the Palestinian Authority, briefs the Council via video teleconference.  UN Photo/Rick Bajornas

The Security Council Open Debate entitled, “The Middle East Including the Palestinian Question” was convened by the Council’s current president, Sweden, on 17 January 2017. The meeting predominantly focused on the ongoing conflict between Israel and Palestine, as Member State representatives reflected upon recent developments following the adoption of UNSCR 2334 (2016). Additionally, the debate afforded significant attention to the situation in the Syrian Arab Republic, specifically the prospect of peace talks between the Assad Regime and Opposition forces in the Kazakh capital of Astana on 23 January. Ultimately the discussion included a greater gender perspective than prior debates on the Middle East, though less than 10 percent of speakers addressed issues related to Women, Peace and Security.

A total of 41 statements were delivered at the debate. The debate was introduced by the UN Special Coordinator for the Middle East Peace Process, Nickolay Mladenov, whose briefing delineated recent events between the feuding states. These included the January 8 terror attack in Jerusalem, the Palestinian electricity crisis, and increased Israeli demolition and settlement activities. The representatives of the states in question followed Mladenov, engaging in a contentious discussion wherein the Palestinian representative remarked that UNSCR 2334 (2016) is not anti-Israel, but pro-peace and therefore serves the interests of both states. In response, the representative of Israel, Danny Danon, announced that Israel would withdraw its funding for key UN Entities, a measure which the representative of the Maldives later described as “a punitive act directed at the supporters of the resolution.” The remainder of the discussion reflected broad support among Member States for the two-state solution and widespread condemnation for both illegal settlements and acts of terror.

Member State discourses regarding the Syrian Crises diverged between hope for the imminent Astana Peace Talks and concern for the persisting siege and atrocities committed by the Assad Regime. Of the delivered statements, 20 (49 percent) referenced the situation. Some Member State Representatives, like that of Iran, condemned the Israeli occupation of the Syrian Golan. Others, such as the representatives of Costa Rica, India, Kazakhstan and the UK, among others, expressed support for the adoption of UNSCR 2336 (2016), which calls upon all parties involved to increase their efforts to achieve comprehensive peace.

The situations in Lebanon, Iraq, and Yemen also found a platform in this debate. Just over 14 percent of the delivered statements, including those made by the representatives of Uruguay, Ukraine, Pakistan, Iran, Brazil, and Argentina, expressed concern for the humanitarian crisis and ongoing violence in Yemen. Many called for the renewal of peace talks, which were abandoned following the Kuwait talks in August. Similarly, 17 percent of Member State representatives drew attention to the situation in Iraq, in which a humanitarian crisis grows amidst strategic gains in Mosul. In particular, the representative of Kazakhstan called for safe corridors to be opened to allow for the transit of emergency assistance and humanitarian relief. In the case of Lebanon nearly all references were expressions of congratulations for the resolution of the state’s 29-month presidential vacancy and the election of Michael Aoun.

Of the 41 statements delivered at the debate, 4 (9.7 percent) speakers addressed issues relevant to Women, Peace and Security. While referencing gender, the representatives of Venezuela and the Syrian Arab Republic did not award any substantive attention to the WPS Agenda, only referring to the impact of violence on Palestinian men and women. On the other hand the representative of Brazil called on Member States to afford special attention to the plight of women and girls in humanitarian crises. The Representative of Sweden offered the most impactful gender perspective of the day, emphasising that women must be meaningfully engaged in Syrian Peace Processes.

Though geographically oriented, each of the situations discussed by Member States in this debate boiled down to the need to build peace throughout the Middle East. The Security Council’s Resolutions on Women Peace and Security illustrate the positive impact women have on peace processes: When women are included, the probability that an agreement will last 15 years increases by 35 percent. Parallel trends are exhibited when women are included in post-conflict recovery and peacekeeping efforts.

Furthermore, the devastating humanitarian crises in this region have a disproportionate impact on women and girls: Not only are they the primary victims of these conflicts, but they are affected in gender-specific and intersecting ways. It is vital that a gender lens is applied to humanitarian assistance efforts, both to address the needs of a vulnerable population and facilitate stabilisation.

For success building peace in the Middle East, Member States must engage with women and women’s organisations and address the specific needs of women and girls. As of yet, the discourse on these issues is strongly lacking and therefore comprises yet another impediment to peace.

UN Special Coordinator for the Middle East Peace Process, The Committee on the Exercise of the Inalienable Rights of the Palestinian People