Security Council Open Debate on The Middle East, Including the Palestinian Question, January 2018 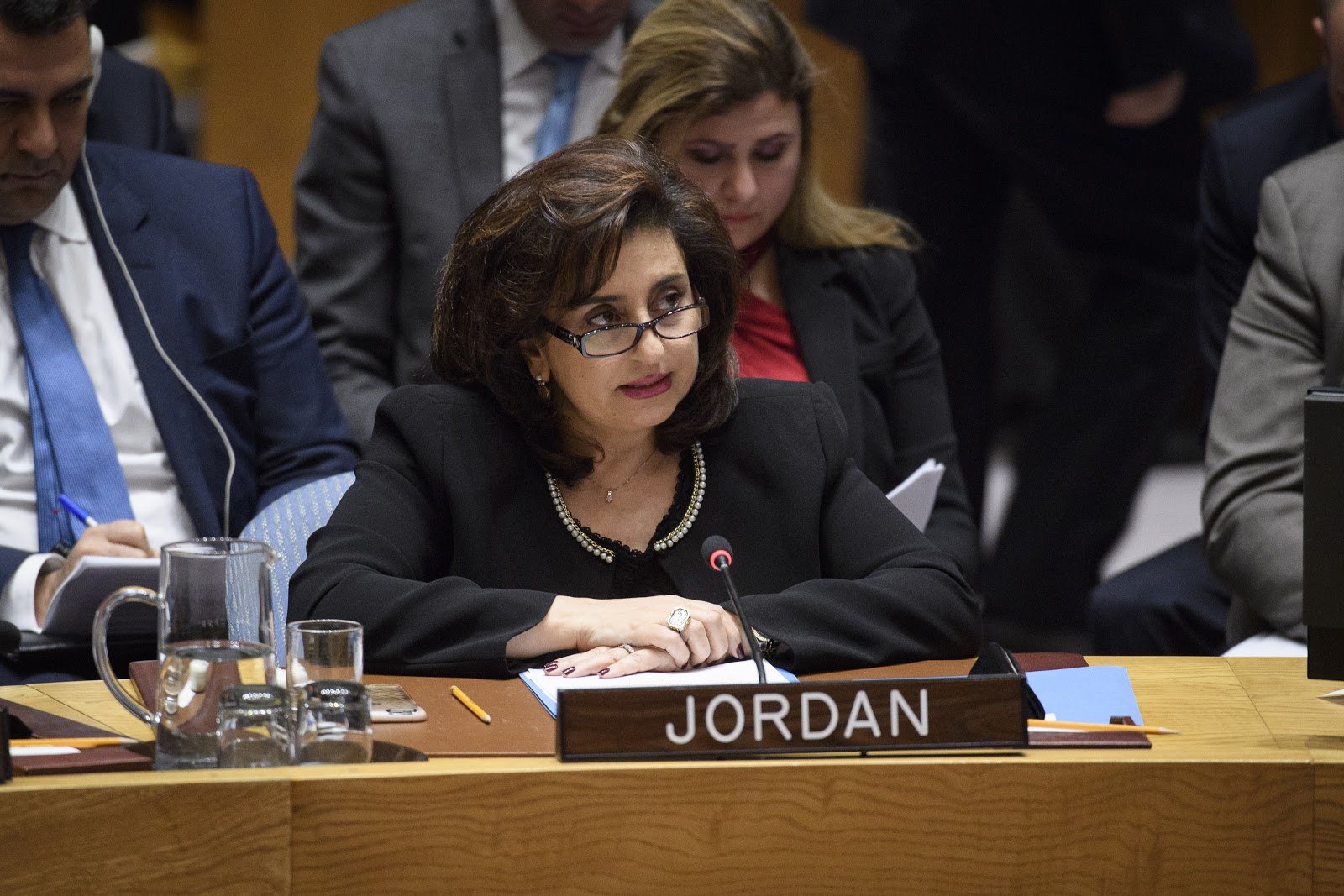 Sima Sami Bahous, Permanent Representative of the Hashemite Kingdom of Jordan to the United Nations addresses the Council on 8 December 2017 on the situation in the Middle East, including the Palestinian question (UN Photo/Manuel Elias)

On 25 January 2018, under the Presidency of Kazakhstan, the Security Council held its quarterly open debate under the agenda item “The situation in the Middle East, including the Palestinian Question”. During the debate, representatives of Member States exchanged views on how to best support the Middle East peace process following the 6 December 2017 decision of the Trump administration to recognise Jerusalem as Israel’s capital. Other topics of the discussion included humanitarian challenges facing Yemen and Syria, as well as the need to increase funding for humanitarian agencies operating in besieged areas. Unfortunately, gender analysis and understanding of the gender dimension of the conflicts in the region, as well as the understanding of the importance of women’s meaningful participation and the capacity of women’s groups to advance feminist peace in the region, remained missing. Moreover, the very needed focus on disarmament, as well as its value to the prevention of further violence were omitted.

Special Coordinator for the Middle East Peace Process, Mr. Nikolay Mladenov, focused his opening statement on the recent escalation of violence and humanitarian crisis in Gaza and other conflict areas in the region. While he noted that more funding had been made to the provision of medical clinics and related services in such areas, they remain inadequate and limited, especially after the US reduced its $60 million pledge to the United Nations Relief and Works Agency for Palestine (UNRWA).

The key topics of the debates included:

Most of the debate focused on the reaffirmation of most Member States that the two-state solution, in line with Resolution 242 (1967) and international law, remains the only viable way to achieve lasting peace in the region. Iran, in particular, shed light on the lack of implementation of over 80 Middle East-focused Security Council Resolutions, including Resolution 242 (1967) and Resolution 2334 (2016). In view of this, speakers called upon Israel and Palestine to return to the negotiation table; a very complicated ask in light of ongoing tensions between the representatives of both states. With the exception of the US and Israel, many speakers condemned the Trump administration’s 6 December 2017 decision recognising Jerusalem as Israel’s capital, claiming that similar action would only complicate the peace process in the Middle East and enable further violence.

During the debate, Member States condemned the increased politicisation of humanitarian assistance, following the Trump administration’s decision to reduce its funding towards humanitarian agencies like UNRWA. As reported by Mr. Mladenov,  UNRWA has played a key role in providing basic healthcare, education and relief for Palestinian people, including refugees, and has provided about 50% of the total humanitarian aid that has come into the country. Most speakers condemned this decision, calling for an even greater amount of funding to be provided for humanitarian and relief agencies. The Netherlands, Kuwait, Sweden and Norway were among speakers who reaffirmed their commitment to the funding of UNRWA, with Norway committing to increase their contribution to half a billion US dollars.

Member States representatives also briefly discussed humanitarian situation in other countries. As pointed out by Sweden, for example, there are no alternative means to access parts of Northern Syria, which continues to face increased attacks by ISIL, and where the humanitarian situation remains devastating. Maldives and Kazakhstan, on the other hand, reported on how the closure of ports in Yemen has led to famines, diseases and increasing humanitarian turmoil in the country.

Out of 50 speakers, only 1 referenced women’s meaningful participation in the context of facilitating peace process. Speakers generally failed to address the multi-dimensional character of the conflict. The debate demonstrated that the WPS Agenda has not gained any normative strength in discussions on the situation in the Middle East. Apart from fleeting references to the suffering of women and the need to include women in peace discussions, speakers failed to address the multi-dimensional character of the human rights crisis across the conflict cycle, from conflict prevention to peace process to reconstruction and peacebuilding. While almost all the speakers noted the importance of ensuring sustainable peace in the Middle East, only Cote d'Ivoire, Liechtenstein, Iran, Saudi Arabia, Estonia and Argentina referred to disarmament as an important means of achieving this.

Out of the 50 speakers at the debate, only 7 (14 percent) mentioned the importance of disarmament. Nonetheless, these speakers mostly referenced disarmament in relation to chemical weapons in Syria, with the representative of Iran highlighting the impact of arms transfers on the lives of people in Palestine and general climate in the Middle East. Other forms of weapons and militarisation were not called for to be eradicated. For example, the Council remains silent on the humanitarian crisis in Yemen and its proliferation dimension. Further, none of the statements acknowledged the differentiated impact of weapons on women, or recognised the role of women in disarmament efforts.

Out of 50 speakers, only 25 (50 percent) referenced the worsening humanitarian crisis and even fewer provided substantial recommendations to address the issue. Even then, the lack of gendered analysis and gender-disaggregated data in the discussions was very stark. There were no gender-specific information revealing the varying effects of the violence. In this regard, there was also no mention on introducing any gender-specific humanitarian assistance efforts in conflict zones.

None of the speakers also mentioned ongoing sexual and gender-based violence in some conflict zones, including the continuing disappearance and enslavement of Yazidi women and girls in Iraq and growing levels of SGBV in Yemen. Considering previous reports on the prevalence of targeted violence against women and girls, this is a very dangerous development that may leave many women across the region at risk of SGBV.

The discussion and policies around addressing the situation in the Middle East remain gender-blind despite women’s organisation’s increased efforts to advance feminist peace in the region. In order to achieve progress, the Security Council, Member States and other relevant parties must:

Meeting Record Of The Security Council Open Debate On The Middle East, Including The Palestinian Question: January 2018