Security Council Open Debate on The Middle East, Including the Palestinian Question: July 2017

Security Council Quarterly Open Debate on the Situation in the Middle East, including the Palestinian Question: July 2017 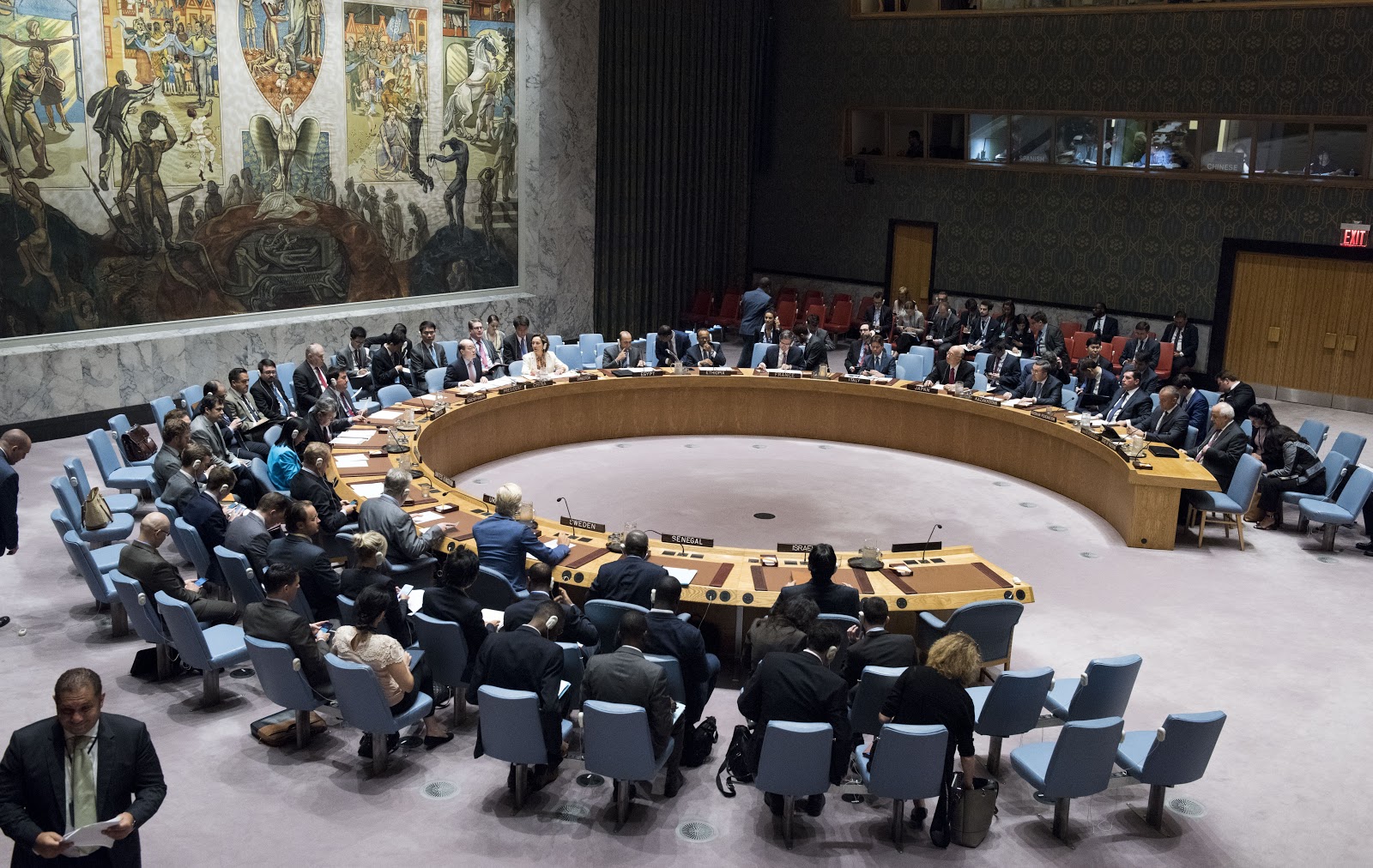 The Security Council discusses the situation in the Middle East, including the Palestinian question (Photo: UN Photo/Kim Haughton).

The Security Council Quarterly Open Debate on “the Situation in the Middle East, including the Palestinian Question” was convened by the Council’s current president, the People’s Republic of China, on 25 July 2017. The debate provided an opportunity for the speakers to exchange views on how to best support the Middle East peace process following the recent escalation of violence in East Jerusalem and the West Bank. Outlining the most recent political and security developments in the region, Special Coordinator for the Middle East peace process, Nickolay Mladenov, called on all actors to refrain from any actions that could further escalate the situation that is already volatile. Speakers also underscored the crises in the Gaza Strip, Syria, Yemen, Lebanon and Iraq, demanding the cessation of all hostilities throughout the region and calling for increased humanitarian support in order to facilitate the return to political solutions. In the midst of the conversation, references to gender and women’s rights were minimal, with only 6 percent of the speakers referring to women’s increased vulnerability in conflict settings. As usual, the discussion on the issue keeps on failing to promote the inclusion of women in the peace processes as a vital component of ending the stalemate, and acknowledge the disproportionate impact of the conflict on women.

Reporting on the most recent escalation of violence in the Middle East, Nickolay Mladenov  called on both parties to cease provocative actions and hostile rhetoric and reminded that a  political solution is the only acceptable way to address the situation in the Middle East. However, the representatives of both parties have demonstrated significant differences in their positions, with one condemning actions of the other. The representative of the Permanent Observer for the State of Palestine condemned Israel’s “illegal actions” against Palestinian people, while the representative of Israel denounced Palestine’s “culture of hate” and “glorification of terror”, accusing Palestine to sponsor terrorism in the region. Other speakers denounced the rise of violent extremism, as well as the lack of accountability in the region. Most of them also highlighted the vital need for states to observe human rights and international law and encouraged all parties involved to fully implement Resolution 2334 (2016) as the only long-term way to ensure the realisation of a two-State solution.

Several states underscored that the international community must create a new architecture of peace to resolve issues, pointing out that, for the period of 50 years, the United Nations Security Council has failed to find a solution to one of the most widely discussed issues since the formation of the Organisation. Indeed, the Vice-Chair of the Committee on the Exercise of the Inalienable Rights of the Palestinian People described the question of Palestine as the longest-standing item on the United Nations agenda.

The majority of speakers expressed deep concern over the dire humanitarian situation in the Gaza Strip, where 2 million citizens live amid shortages of electricity, water, sanitation and other critical services. “Gaza is a ticking bomb”, said the Representative of Senegal, “and it will be impossible to live in Gaza by 2020”. In this regard, speakers called on Israel to uphold its obligations as the occupying power in the Gaza Strip. Speakers also expressed outrage at Israel’s blatant violations of international law and Resolution 2334 (2016) as it advances plans to build 2,300 housing units in East Jerusalem – 30 percent more than were advanced during all of 2016. A number of speakers argued Israel’s settlements continue to be the main obstacle to peace, and threatens a two-state solution.

In addition to assessing the situation in Israel and Palestine, the speakers discussed possible solutions to other conflicts in the region.

Discussing the situation in Syria, the majority of speakers denounced the use of chemical weapons in the country and underscored the need for full and unhindered humanitarian access. They called upon all stakeholders to work for a political solution in Syria. The representative of Ukraine stressed his dissatisfaction with the “slow progress on the political track”, while the representative of Turkey emphasised that only a multidimensional strategy can achieve the dual objectives of eliminating terrorism and stabilising Syria.

States advocated for greater international support to the Government of Iraq following the liberation of Mosul, as challenges remain in ensuring the safe and dignified return of displaced persons, and national reconciliation is yet to be completed.

Turning to Lebanon, the speakers called for greater assistance for Lebanon’s current refugee crisis and partnership in fighting terrorism. Regarding the latter, the representative of the United States noted that the United Nations Interim Force in Lebanon (UNIFIL) has not been taking appropriate action in respect of Hizbullah - namely in matters related to disarmament and stopping the illegal flow of weapons -  which continues to de-stabilise the region as a whole.

The Representatives of Kazakhstan, Uruguay, Ukraine, Jordan, Iran and the Holy See, among others,  expressed particular concern at the humanitarian situation in Yemen, calling for decisive measures to prevent the spread of cholera by ensuring full humanitarian access. Specifically, the Representative of Kazakhstan stated: “the Yemeni crisis has no military solution”.

47 out of the 50 speakers (94 percent) at the debate failed to address the Women, Peace and Security Agenda and its importance for addressing the situation in the region. When the reference to the Agenda were made, they were delivered with the shadow of women’s vulnerability. First, the representative of Sweden condemned Israel’s closure policy in the Gaza Strip and acknowledged the impact of the blockade on Palestinian women. “Women and children should not pay the price for the ongoing crisis”, says the representative of Sweden. Indeed, as heads of households,  women suffer the most from water and electricity shortages. However, the representative of Sweden missed an opportunity to address specific ways in which women are disempowered under occupation. Moreover, he failed to suggest ways to improve their situation in conflict.

The representative of Venezuela denounced Israel’s violation of women’s human rights. Yet too little attention was afforded to displaced women and women’s participation in peace processes. Israel’s statement mentioned women’s empowerment through education programme. Such reference however was used a tool to illustrate the crimes of the Palestinian Liberation Organisation and their economy of terror, limiting the resonance of their statement.

The overtly politicised nature of the discussion was only superseded by the fundamental failure to address the root causes of conflicts in the Middle East: namely militarisation, authoritarianism, political and economic inequality and the oppression of marginalised populations such as women and girls. Against this backdrop, Costa Rica reiterated that military options are not the real solutions and that peace must be built using the tools of diplomacy and multilateralism, instead of the tools of violence and destruction.

As the situation continues to be violent and as more terrorist attacks are taking place in the region, the discussion and policies around addressing the situation in the Middle East remain gender-blind.

For progress, the UN Security Council, UN Member States and other relevant parties must:

Meeting Record 1 of the Security Council Open Debate on The Situation in the Middle East and the Palestinian question: July 2017

Meeting Record 2 of the Security Council Open Debate on The Situation in the Middle East and the Palestinian question: July 2017