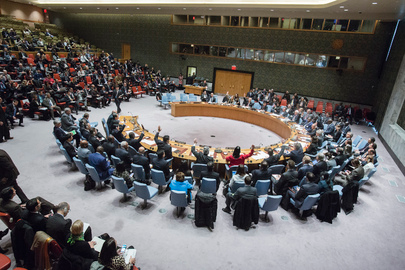 The Security Council Open Debate entitled, “Non-Proliferation of Weapons of Mass Destruction: A Global Agenda for Stopping Proliferation of WMD by Non-State Actors” was convened by the Council’s current president, Spain on 15 December 2016. The main focus of the meeting was to develop an international framework to prevent non-state actors from acquiring Weapons of Mass Destruction (WMDs) amidst increased globalisation and technological advances. The Council unanimously adopted Security Council Resolution 2325 (2016), which calls on Member States to strengthen national non-proliferation policy, domestic controls, and implementation, as well as submit annual progress reports to the Committee established by Resolution 1540 (2004) on the non-proliferation of weapons of mass production. UNSCR 2325 (2016) also encourages members to strengthen state capacities, facilitate cooperation across all sectors, and contribute funds to the United Nations Trust Fund for Global and Regional Disarmament Activities. Speakers at the debate emphasised that the threats posed by non-state actors acquiring WMDs are no longer hypothetical scenarios, as groups like the Islamic State of Iraq and the Levant (ISIL/Da’esh), have deployed chemical weapons, such as mustard gas, in their attacks. Many representatives condemned the chemical weapons attacks committed by the Assad regime in Syria and the continued nuclear proliferation efforts of the Democratic People’s Republic of Korea (DPRK), however more in depth discussions of state responsibilities regarding WMDs were absent. The Council called for the full implementation of UNSCR 2325 (2016) to address gaps created by the evolving global security environment. However there was a divide between states who, on one hand, called for the Security Council and the 1540 Committee to increase their efforts to strengthen national implementation measures, and on the other expressed concern that these entities not impinge on national sovereignty. Despite widespread agreement regarding the need to prevent the acquisition of WMDs by malicious groups, few speakers discussed broader themes of state disarmament and not a single speaker included a gender perspective relevant to disarmament. The effects of chemical, nuclear, and biological weapons are catastrophic and disproportionately impact women and children. This reality demands that women have space to meaningfully participate in disarmament efforts and the implementation of this resolution.

A total of 80 statements were delivered at the debate. The Deputy Secretary-General, Jan Eliasson introduced the topic, stating that non-proliferation is the international community’s greatest responsibility. Eliasson highlighted the lack of regulations and poor security around state weapons stockpiles and expressed concern for the, ever more plausible, possibility of accessing WMDs through cyber-warfare. The Deputy Secretary-General was followed by a number of briefers, including the High Representative for Disarmament Affairs, Kim Won-Soo, and the Vice President of International Trade Law at DHL Global Business Services, James Min. The former emphasised the need to strengthen preventative measures and echoed Eliasson’s reminder that the only sure way to prevent non-state actors from acquiring WMDs is total and universal disarmament. The latter offered an insight into how the private sector can collaborate on this issue, outlining DHL’s efforts to screen customers and shipments to ensure that the corporation does not facilitate illicit transfers. Representatives of states such as Spain, the UK, and Senegal emphasised the need for states to collaborate with civil society and the private sector, including academia, to prevent proliferation. Representatives, including those of New Zealand, the EU, and the Inter American Committee against Terrorism of the Organization of American States, expressed concern for the lack of response mechanisms available to the international community should an attack occur, and stressed the role of these Security Council in augmenting such procedures. The European Union and the Russian Federation also underscored their proposals for holistic approaches to preventing proliferation by non-state actors.

Of the 80 statements delivered at the debate, 1 (1.25 percent) speaker addressed issues relevant to women peace and security. Brian Finlay of the Stimson group noted at the outset of his statement that, as the world becomes more hospitable it also affords non-state actors access to technologies and materiels that may contribute to proliferation. Within this context of increased global prosperity, he remarked that more “women and girls are educated today than ever before”. This statement, though notable for its inclusion of gendered language in a debate otherwise lacking, does not contribute to the debate’s focus on non-proliferation, nor is it substantive within the WPS Agenda. Women have a vital role in non-proliferation efforts, as was recognised by the UN General Assembly in 2010, when the entity adopted the resolution entitled “Women, Disarmament, Arms Control and Non Proliferation” (A/RES/65/69). Upon adopting this resolution UN Member-States committed to ensuring women’s equal representation at decision-making levels in disarmament and non-proliferation efforts. Article 7.4 of the Arms Trade Treaty (ATT) further codifies the link between women and disarmament, noting that women and children are the primary victims of armed conflict. The failure of a single member state to acknowledge these precedents, or the precedents of the Women Peace and Security Resolutions, during Thursday’s debate is of great concern. Disarmament and non-proliferation are representative not only of removing or securing weapons materiels, but of ensuring peace by demilitarising society. Women are impactful peacebuilders, and possess significant knowledge to aid disarmament efforts: the Security Council must recognise these facts and implement the WPS Agenda throughout resolutions like UNSCR 2325(2016) if their efforts are to be successful.