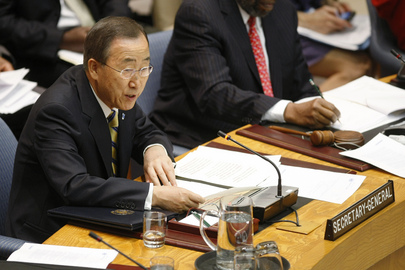 Secretary-General Ban Ki-moon presents his reports on peacebuilding in the immediate aftermath of conflict and women's participation in peacebuilding to the Security Council. (UN Photo/Paulo Filgueiras)

The Security Council's open debate on peacebuilding on Wednesday, 13 October 2010, featured consultations from the Secretary-General and the Chair of the Peacebuilding Commission (PBC). Secretary-General Ban Ki-moon and Ambassador Wittig (Germany) briefed the Council on two reports: S/2010/386, Peacebuilding in the immediate aftermath of conflict and S/2010/466, Women in Peacebuilding. In addition to the permanent and non-permanent members of the Council, the co-chairs of the PBC review process, Ireland, Mexico, and South Africa as well as forthcoming non-permanent member Portugal, joined 11 additional states in responding to the two reports. The debate was chaired by the Ugandan delegation, whose presidential statement touched upon the key issues of financing, reviewing civilian capacity, improving rule of law and governance in peacebuilding efforts as well as the importance of the full and equal participation of women in the development and implementation of post-conflict strategies and peacebuilding. The President requested the Secretary-General to return to the Council within a year's time to brief its members on progress made towards the gender mainstreaming of peacebuilding.

Secretary General Ban Ki-Moon opened the debate by stating that peacebuilding requires patience, long-term commitment, broad involvement from a variety of actors, and perhaps most importantly, an efficient and expeditious delivery on the ground. He listed four key areas that need improvement for peacebuilding processes. First, it is crucial to have the right people, at the right place, at the right time; he explained that having a team of experts readily accessible allows for greater accountability, hasty deployment, and stronger localized support teams. Second, there must be predictable financing that is also flexible and methodological. Third, peacebuilding is dependent on global partnerships not just within the UN or the Security Council, but also from institutions. And fourth and most notable, women must be put at the heart of peacebuilding. He called attention to the urgency of including women in all stages of peace processes and stressed the need for a robust implementation of UNSCR 1325. He then outlined seven areas where women's roles in peacebuilding need to be enhanced: all levels of peace talks, post-conflict planning, post-conflict governance, rule of law initiatives, the rebuilding of state institutions, economic recovery, and financing geared towards women's specific needs. In regards to this last point, the SG committed a 15% allocation of funds for women's programs. Ultimately, SG Ban Ki-Moon made explicitly clear that ensuring women's participation in peacebuilding is crucial to lasting peace. Henceforth, the legitimacy and sustainability of peace cannot be achieved without gender inclusiveness and gender equality.

The debate attracted a large turn out with a majority of representatives referencing women in their statements. These delegations included: the United Kingdom, the United States, Austria, France, Bosnia and Herzegovina, Turkey, Brazil, Japan, Lebanon, Russia, Nigeria, Mexico, Gabon, Uganda, Peru, Portugal, Canada, Bangladesh, South Africa, Morocco, Pakistan, the Czech Republic, Australia, Egypt, Nepal, Finland, Chile, Croatia, Thailand, the European Union and Chairman of the Peacebuilding Commission from Germany. After taking note from the Secretary General, the Council members and representatives welcomed continuing efforts to improve post-conflict peacebuilding. They all agreed with the Secretary General's action plans, both the general points surrounding peacebuilding and the agenda for the greater inclusion of women. Speakers also stressed the need for closer coordination among all relevant actors, including the Peacebuilding Commission, international finance institutions, Security Council members, and civil society stakeholders. One of the most recurring themes amongst speakers was the primacy of national ownership and the building of national capacities in order for States to take full responsibility of their own successful and sustainable emergence from conflict; this also highlights the need for a smooth transition from peacebuilding to peacekeeping. Most speakers also agreed on the importance of women's involvement in peacebuilding and the necessity of gender inclusiveness and responsiveness. Generally, the representatives expressed that peacebuilding without women's full participation is futile and that for any peacebuilding mission to transition into long-term peace and stability, women need to play an active role, both in positions of leadership and as ground personnel. The endorsement of the Secretary General's 7-point action plan was prevalent; thus, almost every speaker affirmed that gender needs to be mainstreamed, that women's voices and roles need to be integrated, and that women need to be empowered for peacebuilding to be effective. The creation of UN Women was also periodically mentioned as a tool that will soon be utilized to ensure that women and gender are advantageously incorporated into the peacebuilding regime.

Noticeably absent were mentions of women in peacebuilding by China and Ireland. China's statement referenced the first report only while Ireland focused on the Secuirty-General's third recommendation of foraging key relationships in peacebuilding. Although most member states gave marked attention to issues of women, peace, and security, their statements mirrored the structure of the Security-General's four recommendations. Women's role were thus treated as addendums to peacebuilding priorities rather than integrated into all aspects of the discourse. A fully gendered approach to the debate would have referenced women within the contexts of flexible financing, fostering national ownership, and reviewing civilian capacities rather than as a final or additional point of emphasis. The open debate demonstrated Member States' cognition that peacekeeping and peacebuilding are not sequential, but rather, overlapping processes. This same conclusion could have been applied to women's peacebuilding needs and concerns with regard to protection, participation, and prevention. While the Security-General's second report specifically dealt with women's participation, representatives could have linked women in peacebuilding to prevention, rather than placing whole emphasis on protection and participation. This omission leaves room for greater integration of the Women, Peace and Security agenda in peacebuilding efforts.