Security Council Open Debate on the Protection of Civilians in Armed Conflict, June 2012

On 25 June 2012, the Security Council held an Open Debate on the Protection of Civilians (PoC) in Armed Conflict. The discussion, which pivoted upon the Secretary-General's recent report (S/2012/376) on current challenges to effective PoC, did not result in the adoption of an outcome document.

The debate featured 50 statements, including 3 UN officials, a representative of the International Committee of the Red Cross (ICRC), the permanent and non-permanent members of the Council, and 31 other member states. Consistent with the previous Council debate on this issue, approximately 23, or 46% of these statements addressed the gendered dimension of protection of civilians.

In characterizing the violations civilians experience in conflict, speakers often highlighted the gendered impact of warfare, specifically touching upon the prevalence of sexual violence. In his opening statement, Secretary-General Ban Ki-moon noted, “More and more, we are witness to an appalling catalogue of sexual violence, forced disappearances, torture and other acts that violate, often egregiously, international humanitarian and human rights law.” Throughout the debate, speakers reiterated the Secretary-General's sentiment, emphasizing that women are a particularly vulnerable civilian group in conflict.

While many speakers urged for the increased protection of women and children during periods of armed conflict, only a few discussed issues of women, peace and security at length. Detailing the devastating effects of sexual violence against women and girls, the Republic of Korea pointed to the adoption of Security Council Resolutions 1820, 1888, and 1960 as commendable Council action. Similarly, Canada framed its statement through reference to Resolution 1325, condemning violence against women and girls and calling for women's participation in peace processes.

Several speakers emphasized the significance of accountability in addressing sexual and gender-based violence against civilians. Drawing the Council's attention to the mass rapes that occurred in the Walikale territory of the Democratic Republic of Congo two years ago, The United States expressed disappointment in the fact that justice has not yet been rendered.

Finally, in anticipation of the upcoming Arms Trade Treaty (ATT) Conference, Austria addressed the critical relationship between arms trade, the protection of civilians, and gender. Austria urged that the ATT should set robust, ambitious, and legally binding standards that prevent transfers if there exists a substantial risk that the weaponry will be used to commit gender-based violence. (See WILPF's Joint Policy Paper on Gender and the ATT on this) 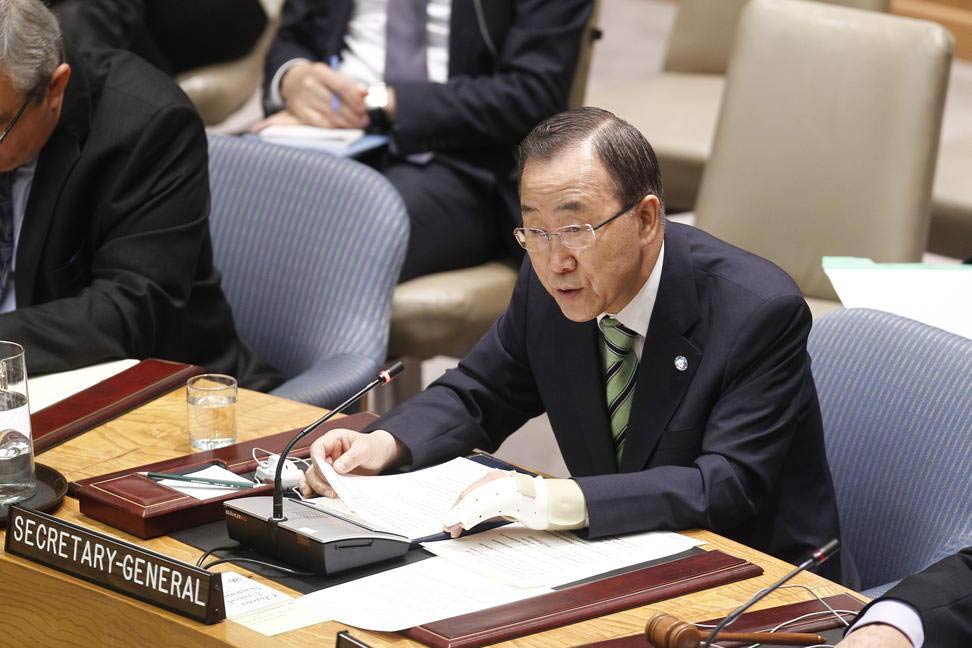 Secretary-General Ban Ki-moon presents the Security Council his latest report on “protection of civilians in armed conflict”. Among the areas of concern highlighted were the violent activities perpetrated by non-state actors and elements of national security forces in the Democratic Republic of the Congo, the increase over the last year of civilian deaths in Afghanistan, and continued unrest in Syria. (UN Photo/JC McIlwaine)

Although the debate did not result in the adoption of a resolution or a presidential statement, it did involve a thorough discussion, grounded in deliberation on ongoing armed conflicts. The debate focused upon the Secretary-General's recent report S/2012/376, which detailed five core challenges to the effective protection of civilians: enhancing compliance with international human rights and humanitarian law; engaging with non-state armed groups in order to improve their adherence to international law; strengthening protection by UN peacekeepers; improving humanitarian access to civilians trapped in conflict; and increasing accountability for violations.

Throughout the debate, several conflicts were repeatedly brought forth to illustrate the global repercussions of failing to protect civilians in armed conflict. The situations in Afghanistan, the DRC, Sudan, Yemen, Mali, and Syria were all referenced by various speakers seeking to demonstrate the shortcomings of the current international approach to the protection of civilians.

As Secretary-General Ban aptly suggested, confronting the challenges identified in his report requires political will. Not only must parties to the armed conflict refrain from violations of international law and allow for unrestrained humanitarian access, but the Security Council also must also be willing to deliver on its long-standing commitments and use the tools at its disposal. Several speakers urged for the increased use of targeted sanctions, the imposition of arms embargoes, and referral of situations to the International Criminal Court.

Under-Secretary General for Humanitarian Affairs Valerie Amos reiterated, “Ensuring such compliance begins, of course, with the parties to the conflict,” Ms. Amos said. “But the responsibility is not theirs alone. It is a responsibility that is incumbent on us all – the United Nations, its Member States and this Council. We can and must do more to fulfill that responsibility and ensure that the law has meaning for those it is intended to protect.”

UN and civil society representatives speaking at the debate included: Secretary-General Ban Ki-moon, Under-Secretary General for Humanitarian Affairs Valerie Amos, ICRC Director for International Law and Cooperation Phillip Spoerri, and Ivan Šimonović, who delivered a statement on behalf of the High Commissioner for Human Rights, Navi Pillay. Statements were also made on behalf of the European Union, the Group of Friends on the Protection of Civilians, and the Nordic Countries.