Security Council Open Debate on the Protection of Civilians in Armed Conflict, November 2010

On November 22, 2010 the Security Council held an open debate on the Protection of Civilians in Armed Conflict. The Council had before it the Secretary General's report S/2010/579 which states that civilians, either as accidental or intentional targets of attack, continue to account for the majority of casualties in conflict. Thus, the Council stressed that the protection of civilians requires urgent attention and expedient action of all Member States. The President of the Security Council, currently the United Kingdom, reaffirmed the Council's commitment to implementing the landmark 2002 Aide Memoire, now amended, which outlines the tools needed to analyze and diagnose key protection issues in the Presidential Statement PRST/2010/25. The President also recommitted the Council to all previous, relevant resolutions that concern the protection of civilians. Moreover, the Presidential statement touched upon important issues such as emphasizing the rule of law, ending impunity, protecting human rights, addressing the unique circumstances of women and children during times of war, and the robust adherence to international humanitarian law. The statement also made it clear that Member States should take national ownership and responsibility for protecting their citizens and must be held accountable for the implementation of all key resolutions.

Most of the speakers referenced the prevalence of sexual and gender-based violence during armed conflict and the high rates of rape that occur during wartime, with particular reference to the Sudan and to the DRC. However, notably absent was the explicit mention of women in the other aspects of the discussion. Very few speakers discussed the disparate impact that conflict has on women and girls and the unique circumstances that women face both during and after armed conflict. Many statements noted the importance of making sure peacekeepers are properly trained in dealing with local populations, yet they failed to mention the specific importance of gender training, the increased inclusion of women peacekeepers, and the need for peacekeepers to have special training when it comes to dealing with victims of sexual violence. There was also little discussion about the role of women as personnel in the field or as participants in bringing about peace. Overall, a gender perspective was largely absent from the open debate, notwithstanding the references to sexual and gender-based violence.

Other themes emphasized throughout the debate was the adoption of a more consistent and coherent framework for protecting civilians and for the aftermath of any violations. The Council members stressed the need for a clear chain of command and enhanced leadership. Speakers emphasized the need for all peacekeeping personnel, on all levels and in all capacities, to be properly trained in dealing with local communities and must be informed of the mission's mandate. Many speakers also noted that each country is different and therefore the missions must be narrowly tailored to the unique specificities of the conflict, so as to better assist the local populations. Peacekeepers must be trained to effectively communicate with the indigenous peoples and with other organizations on the ground. Another common theme was holding states responsible for the protection of their own citizens. In order to do so, it was emphasized that nation-states need to have the proper legal and political apparatus in place to effectively end impunity, strengthen the rule of law, and create the necessary policing forces to ensure the safety of civilians. All of these mechanisms must be in accordance with international humanitarian law and if a nation is unable to provide the essential tools for its people, then it may look to the ICC and the Security Council for assistance. Finally, the Council called for greater protection against sexual and gender based violence during conflict and for stricter control of arms trades, so as to eliminate land mines, light arms and other weapons that often hurt the innocent. 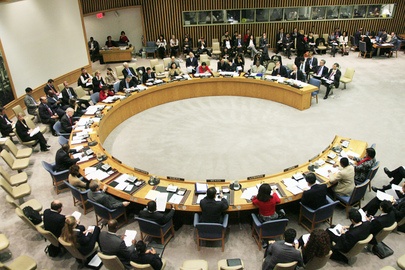 Statements and Extracts are available below.

A wide view of the Security Council as it discusses the protection of civilians in armed conflict.

At their meeting Members reviewed the Secretary-General’s latest report on the issue. (UN Photo/Ryan Brown)