On February 23 2012, the Security Council held an open debate on Women, Peace, and Security: Conflict- Related Sexual Violence. 51 statements were made during the open debate, including statements by the Special Representative of the Secretary-General on Sexual Violence Margot Wallström (SRSG); Under-Secretary-General for Peacekeeping Operations Hervé Ladsous; Amina Megheirb on behalf of the NGO Working Group on Women, Peace and Security (NGOWG); and member state representatives. The closed negotiation of the Security Council resulted in the adoption of the Presidential Statement S/PRST/2012/3.

The main focus of the debate was the Secretary-General's Report on Conflict-related Sexual Violence (S/2012/33), which highlights the ongoing incidence of sexual violence in conflict and post-conflict situations relevant to the reporting period (December 2010 to November 2011) and also includes for the first time an annexed list of parties responsible for patterns of rape in conflict (as requested by the Security Council in SCR 1960), referred to often as the “naming and shaming mechanism”.

PRESIDENTIAL STATEMENT AND DISCUSSION ON MANDATE

Present in the negotiation of the Presidential Statement (PRST) and in the debate itself was the disagreement among States related to the scope and definition of the SRSG's mandate. Despite tension the permanent and non-permanent members of the Council were able to negotiate a statement. The Presidential Statement in the last paragraph technically reviews and renews the mandate of the SRSG when it “invites the Special Representative to continue to provide briefings and information consistent with her mandate and the Secretary-General to recommend appropriate actions.”

Several countries including Russia, Pakistan, India, Egypt, China and Indonesia expressed concern that the SRSG had overstepped her mandate in suggesting actions be taken in countries not on the security council agenda nor in a situation of conflict. By contrast, others such as Italy, UK, Belgium, Switzerland, Brazil, France, Germany, Azerbaijan, EU, Korea, Japan, welcomed the SRSG inclusion of the “areas of concern” and wanted to keep the broader scope of the mandate.

The SRSG office and statement reaffirmed that all information in the report relates to and is relevant for the Security Council in terms of the charter mandate for maintenance of international peace and security. Reference is made to resolution 1960 (OP8) which: ‘Requests the Secretary-General to establish monitoring, analysis and reporting arrangements on conflict-related sexual violence, including rape in situations of armed conflict and post-conflict and other situations relevant to the implementation of resolution 1888 (2009), as appropriate…'

With reference to content, the statement stressed, amongst other things the importance of prevention/early warning systems to achieve effective response to sexual violence, uphold accountability. Referring to resolution 1325 (2000) the statement also emphasized the important role women can play in the prevention and resolution of conflict as well as in peacebuilding.

THE DEBATE AND GENDER ANALYSIS

During the Debate the vast majority of States welcomed the report of the Secretary-General with discussion of its findings and recommendations. SRSG Margot Wallström opened the debate, delivering a robust and comprehensive statement to the Council. Mrs. Wallström highlighted important issues related to WILPF priorities including militarization and participation and their links to sexual violence. 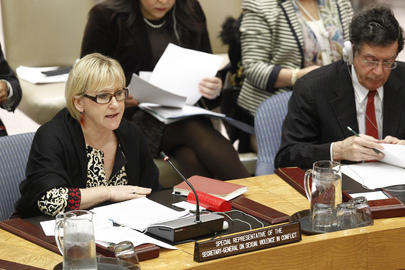 The SRSG placed repeated emphasis on the challenge of arms proliferation and militarization stating that “for instance, the proliferation of small arms and light weapons enable these atrocities. As many women have told me: ‘That man had the gun, and he had the power'. Sexual violence is often perpetuated by incomplete disarmament and the absence of vetting, training and security sector reform.” “We also know that militarized mining can fuel human rights violations by enriching armed groups, for instance in the DRC.”

On the topic of participation, the SRSG stated “Rape has a chilling effect on women's political participation, casting a long shadow of trauma and terror.” Here, the SRSG's aim was to depict these women not as victims but as agents of change, “I am particularly concerned, at this historical juncture, that unless women can shape their own political and personal destiny, the Arab Spring will turn into a winter for Arab women.” The SRSG also stated “Monitoring teams must be gender balanced, not gender blind. But, to date, just three ceasefire agreements have included sexual violence.”

Representing Civil Society and delivering a statement on behalf of the NGO Working Group on Women, Peace and Security (NGOWG) was Ms. Amina Megheirb, President of Attawasul Association, a Libyan NGO in Benghazi working on women's empowerment. This statement urged all actors to take the immediate and relevant action on conflict-related sexual violence and emphasized the need to prioritize prevention; as a means of ensuring a survivor-centric approach; and to strengthen efforts to ensure justice and accountability. We also called on all actors to address the root causes of sexual violence. 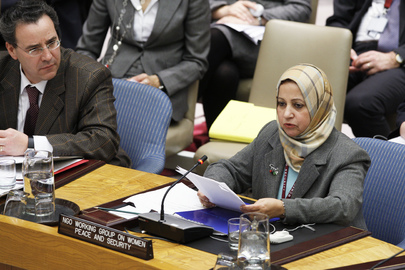 Amina Megheirbi, on behalf of the Non-Governmental Organization (NGO) Working Group on Women, Peace and Security, speaks at the Security Council’s meeting on conflict-related sexual violence. Next to Ms. Megheirbi is Miguel Berger, Germany’s Deputy Permanent Representative to the UN. (UN Photo/Devra Berkowitz)

Here, Ms. Megheirb was direct in her questioning, asking “can we say that ‘all possible steps' have been taken to prevent conflict-related sexual violence? Can we say that to women, girls, and their communities in Eastern DRC, or to the survivors in my country, Libya? Can we say that to the rest of the world? Have Member States and the UN invested all available political, technical, and financial resources to prevent further atrocities? If not, why not?”

Almost all States noted the importance of prevention and early warning in combating conflict-related Sexual Violence. With the SRSG recognizing that sexual violence plays a dual function as a precursor to conflict and a tool utilized in its wake. Prevention was referenced in multiple ways by member states in the debate.

Most states did not make the connection between the ready availability of small arms and increased violence against women and children but Germany did by stating that “Another aspect often overlooked when discussing prevention of violence, but mentioned today by the SRSG, are small arms: There is some evidence that, especially after an armed conflict, the ready availability of small arms increases the threat of their use especially against women and children.”

Vietnam and Brazil, pointed out the interconnectedness between sexual violence and Millennium Development Goals, and emphasized the need to involve civil society in prevention through grassroots capacity building. Italy also suggested that national and regional early warning systems should include the health, safety and dignity of survivors as an important aspect of prevention.

Furthermore, the SRSG stressed the need for prevention of sexual violence to be made an operational priority in the prevention of conflict. The broad mandate of the SRSG office covering situation of concern is the basis for a preventative approach since prevention must take place in situations that are not already in armed conflict. However (as noted above) some delegations including Pakistan, India and Russia disputed any expansion of the SRSG'S mandate through the investigation of countries not defined by the Security Council as conflict zones.

Many statements included references to justice, as well as the related issues of national law reform and the implementation of international human rights and humanitarian law. Statements underlined the need to combat impunity with Italy noting that perpetrators must get the message that sexual violence was not “cost-free”, and Botswana stressing that “inaction could send a wrong message that sexual violence is tolerated”. On the question of how to take action against impunity, the Presidential Statement drew attention to the range of justice and reconciliation mechanisms to be considered, including national, international, and mixed criminal courts and tribunals, truth and reconciliation commissions. States including Liechtenstein, Estonia and France underscored the importance of the ICC in prosecuting perpetrators. Some statements described steps taken domestically to enhance systems of justice and legislation. Colombia, for example, noted that it had dedicated itself to domestic anti-violence legislation.

Finally, South Africa, Sweden, the Republic of Korea among others welcomed the work of the UN Team of Experts, and encouraged the Team to enhance its assistance to Government, civilian and military justice systems.

Many countries and speakers made references to SCR 1325 and specifically to women's participation in peace processes, as mediators, decision makers and uniformed personnel. The US stated that their ultimate objective was “to incorporate women and girls - not simply as beneficiaries, but as agents of peace, reconciliation, development, growth, and stability” making a connection between their National Action Plan and SCR 1325. Other countries that emphasized the role of women in peace building included Togo, Guatemala, Germany, India and South Africa.

Countries such as Australia, Bangladesh and China put special emphasis on more uniformed women in peacekeeping missions with China wanting to especially see an increase in “female representation from the developing countries.”