On Thursday 2 June, 2016, under the French presidency, the Security Council held a ministerial-level open debate under the theme, "Women, Peace and Security: Responding to human trafficking in situations of conflict-related sexual violence." United Nations (UN) officials stressed that in the past decade, the world has witnessed a fundamental shift in the way the issue is understood and addressed as a peace and security concern. Noting that sexual violence is increasingly evolving from a tactic of war to one of terrorism, participants highlighted the growing use by terrorist and extremist organisations of sexual violence to control and intimidate communities, recruit and maintain fighters and force people from their homes. Speakers also discussed the necessity of supporting those fleeing conflict-related violence through strengthening international collaboration and addressing trafficking in persons that often is underreported in the context of recent conflicts.

In his briefing, the UN Secretary-General noted that sexual violence is rightly seen as a threat to international peace and security, a serious violation of international humanitarian and human rights law, and a major impediment to post-conflict reconciliation and economic development. Sexual violence perpetrated by state actors, militias, and extremists is part of a continuum of violence across societies, in which women’s rights are squandered and gender inequality is the societal and legislative norm, said Lisa Davis of the Non-Governmental Organizations Working Group on Women, Peace and Security(NGO WG on WPS). She also emphasised the need to support women and girls as leaders, reduce vulnerability to trafficking, provide access to sexual and reproductive health care in crisis settings, and end impunity.

Speakers noted that significant progress in addressing the sexual violence had been achieved in the last decade. Deployment of  women protection advisers to peacekeeping and political missions, adoption of several landmark resolutions that confirmed sexual violence as a war crime, and many other tools for countering conflict-related sexual violence, improving accountability and justice, and documenting violations have been developed. However, speakers mentioned frequently that existing Security Council resolutions must be translated into concrete action and that international efforts are not properly financed, nor properly executed. 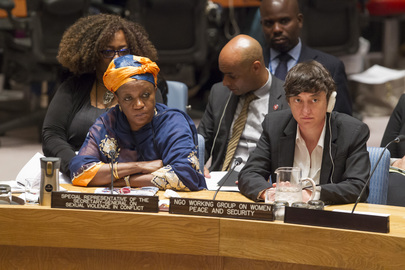 Opening the debate, the UN Secretary-General Ban Ki-moon described sexual violence as a “deliberate strategy used to shred the fabric of society”, citing the abduction of more than 200 girls from Chibok, Nigeria, more than two years ago as one of the most horrific examples of the use of sexual violence as a tactic of terrorism. Since the international community is confronting new and previously unforeseen threats, the Special Representative on Sexual Violence in Conflict Zainab Bangura called for new tools and approaches to enforce compliance of state and non-state actors, who often vary dramatically in character, composition, motivations, capacity and modus operandi. Maria Grazia Giammarinaro, Special Rapporteur on Trafficking in Persons, Especially Women and Children, addressed the abductions of women and girls who were subsequently forced to marry and/or serve as sex slaves by Islamic State in Iraq and the Levant (ISIL/Da’esh), Boko Haram and their affiliates as a strategy to generate revenue as well as to recruit, reward and retain fighters. She also mentioned that millions of people forced to flee armed conflict in their own countries faced an increasingly hazardous journey, pointing out that many were vulnerable to physical violence, sexual assault, extortion and trafficking after having sold all their possessions to pay for their travel. Further developing this thought, Lisa Davis of the NGO WG on WPS pointed out that gender-based violence is perpetrated by both combatants and non-combatants, including intimate partners, family members, state agents, and civilians and humanitarian aid staff; further, gender-based violence is part of a continuum of violence across societies, in which gender inequality is the societal and legislative norm. “We cannot emphasize enough the urgent need to curb the flow of guns and other weapons, which exacerbate levels of sexual and gender based violence,” she stated.

Building on the ideas of the briefers, speakers stressed the need to challenge the harmful stigma of survivors and those born of rape, who far too often were ostracised from their families and rejected by their communities. Malaysia’s representative said that the rescue, recovery and reintegration of women survivors must be a top priority, noting that survivors often suffer twice over: first from the heinous acts themselves, and then from the subsequent stigma associated with being a victim. Lithuania’s representative said that in order to tackle conflict-related sexual violence, the international community must grow out of the “this is a man’s world” perspective, adding that even the best tools would not work if women remained bystanders during peace negotiations, excluded from peacebuilding and post-conflict reconstruction efforts. Despite the international efforts to combat Sexual Exploitation and Abuse (SEA) committed by peacekeepers, speakers voiced concern about recent allegations of sexual violence by those operating within peacekeeping missions and reiterated that the zero-tolerance policy must be enforced. Noting that States had the primary responsibility for enacting legislations in response to human trafficking, terrorism, and sexual violence, representatives called for the harmonisation and updating of national legislative responses around the world.

Out of nearly 53 statements delivered, every speaker expressed that conflict resolution, counter-terrorism strategies and post-conflict development cannot be separated from efforts to protect and empower women and girls. Conflict-related sexual violence occurs in situations where there is also systemic gender-based discrimination, such as the exclusion of women from political life, economic marginalisation and discriminatory systems of both formal and informal law.

Gender expertise is necessary for further sustainable peace. As the representative of Lithuania highlighted, the best international tools to address sexual violence will not work if women remain bystanders during peace negotiations, excluded from peacebuilding and post-conflict reconstruction efforts. Seventy-seven percent of speakers noted that the increased mobilisation of the international community to fight all forms of violence in conflict and post-conflict situations is of crucial importance to prevent further conflicts and address the stigma that affects female survivors after the conflict. As Ms Bangura noted, social and economic reintegration is imperative for women and must become a more integral part of the programmatic response and post-conflict development frameworks.Sixty-one percent of speakers believed that all efforts to prevent conflicts cannot be separated from efforts to protect and empower women and girls. The representative of the United States, in this vein, suggested that more must also be done to protect displaced women and girls at increased risk of violence and trafficking, and greater efforts must be devoted to teaching people how to actually “see” trafficking victims.

Sixty-eight percent of speakers held the view that the Security Council should ensure the active participation of women in peace processes. The representatives of Georgia and Netherlands, supporting this idea, emphasised the benefits of enhancing women’s leadership and participation in decisions on conflict resolution and prevention. Justice, accountability, impunity, and amnesty were mentioned by 85 percent of speakers as imperative measures to redress sexual violence and prevent further crimes. As pointed out by the representative of Senegal, accountability for crimes was another important element of a comprehensive approach to sexual abuse. The representative of the United Kingdom added that anyone committing such crimes must face justice, emphasising:  “Accountability cannot be selective.”

Fifty-three percent of speakers argued that it is crucial to improving the early-warning and prevention capacity of States in relation to conflict-related sexual violence in its monitoring of conflict situations. In the context of a comprehensive response, preventing exploitation required greater attention; therefore, a shift in focus from women as victims to women as agents of change was proposed by the representative of Sweden. Forty-five percent of speakers spoke about recent allegations of sexual violence by those operating within peacekeeping missions. The UNN system should similarly ensure decent working conditions in the context of peacekeeping operations, Maria Grazia Giammarinaro said, calling for the incorporation of anti-trafficking measures into all conflict-zone humanitarian interventions.

Less frequently, Member States referred to issues related to disarmament (7 percent). The representative of Venezuela called on the international community to abide by international law by not providing arms to extremist groups and by harmonising counter-terrorism efforts with those aimed at ending exploitation in situations of armed conflict. Overall, the Security Council along with all Member States must dramatically improve its implementation of the WPSy agenda. The Council was advised to better link protection efforts with women’s participation and rights and better incorporate gender perspective in peacekeeping missions. States, on the other hand, must develop National Action Plans on Women, Peace and Security with policies to protect women and girls as a key component.

Report of the Secretary-General on conflict-related sexual violence (S/2016/361).