Security Council Open Debate on the Situation in The Middle East, Including the Palestinian Question, April 2018 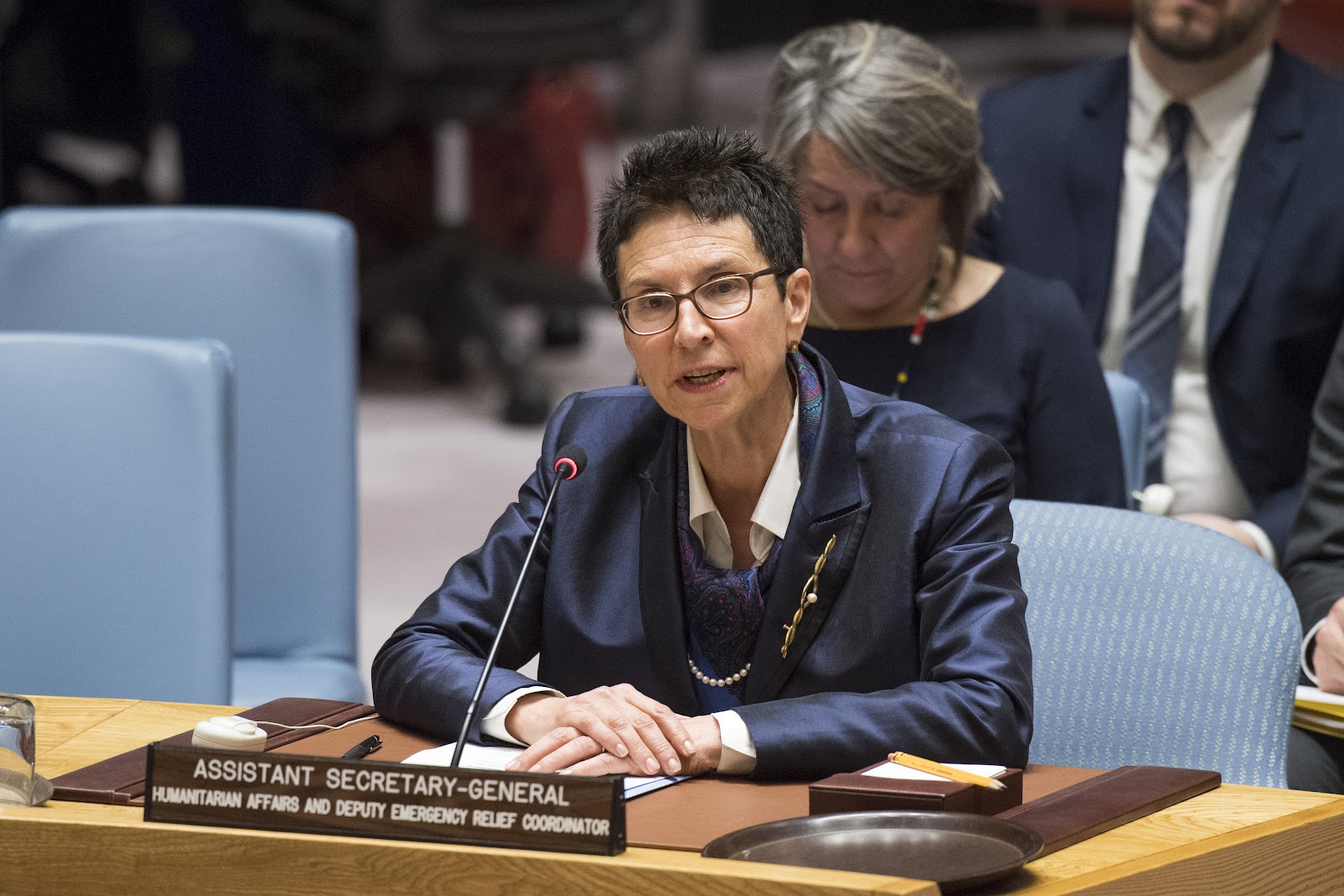 Ursula Mueller, Assistant Secretary-General for Humanitarian Affairs and Deputy Emergency Relief Coordinator in the Office for the Coordination of Humanitarian Affairs (OCHA), addresses the Security Council meeting on the situation in the Middle East (Photo Credit: UN Photo/Eskinder Debebe)

On 26 April 2018, under the Presidency of Peru, the  Security Council held its quarterly open debate under the agenda item “The situation in the Middle East, including the Palestinian Question”. During the debate, representatives of Member States exchanged views on how to best support the two-state solution process in the midst of increased conflict between Israel and Palestine. Other topics of discussion included the need to increase funding for the United Nations Relief and Works Agency for Palestine Refugees in the Near East (UNRWA) and other humanitarian agencies, as well as recent the deteriorating security and humanitarian situations in Syria and Yemen. Unfortunately, gender analysis and understanding of the gender dimension of the conflicts in the region remain missing, as well as the understanding of the importance of women’s meaningful participation and the capacity of women’s groups to advance sustainable peace in the region were missing. Moreover, the very needed focus on disarmament, as well as its value for prevention of further violence were disregarded.

Special Coordinator for the Middle East Peace Process, Mr. Nikolay Mladenov, focused his opening statement on the recent escalation of violence and humanitarian crisis in Gaza. He also shed light  on the ongoing protests against women and children entering Israel, and the Israeli Defence Forces’ work in quelling violence. While he noted that there is continued engagement between the Palestinian Authorities and the Israeli Government in prioritising water and energy initiatives in Gaza.

Other key topics of the debates included:

Most of the debate focused on the reaffirmation of most Member States that the two-state solution, in line with Resolution 242 (1967) and international law, remains the only viable way to achieve lasting peace in the region. In view of this, speakers called upon Israel and Palestine to return to the negotiation table, which is a very complicated ask in light of ongoing tensions between the representatives of both states. With the exception of the US and Israel, many speakers continue to condemn the Trump administration’s 6 December 2017 decision recognising Jerusalem as Israel’s capital and the impact of this statement on the situation around Israel’s Independence Day on 14 May; noting that such actions only served to complicate the peace process in the Middle East. At the same time, many speakers also expressed support for prioritizing development and a cessation of hostilities in Libya, Yemen and Syria; spotlighting concerns on continuing airstrikes in Yemen and chemical weapons attacks in Syria.

During the debate, Member States expressed concern at the loss of lives of peaceful demonstrators during the “March of Return” weekly demonstrations along the Gaza strip. Several speakers reiterated the right of peaceful protest, and condemned the use of excessive force by Israeli forces against the demonstrators as a violation of international law. Reiterating the Secretary-General’s call, following the first day of protests, many speakers called for an independent and transparent investigation into the events.  Meanwhile, the US and Israel maintained that the Gaza border protests were a violent demonstration orchestrated by Hamas, and thus necessitated a self-defence response from Israeli forces. Additionally, the representatives of Turkey, Norway and Liechtenstein condemned the continuing use of chemical weapons by the Assad regime on the the Syrian civilian population.

Throughout the debate, speakers affirmed the indispensable role of UNRWA, and the devastating impact of its budget cuts. As reported by Mr. Mladenov,  UNRWA has played a key role in providing basic healthcare, education and relief for Palestinian people, including refugees, and has provided about 50% of the total humanitarian aid that has come into the country. Representatives of Jordan, Morocco and the Netherlands, calling for an even greater amount of funding to be provided for humanitarian and relief agencies. The Netherlands, Sweden and Norway were among speakers who reaffirmed their commitment to the funding of UNRWA, with Norway committing to contribute 280 million US dollars.

The Representatives of Norway and the European Union highlighted the continuing use of chemical weapons on civilians in Syria. On the same note, other speakers briefly expressed commitment towards supporting the Organisation on the Prohibition of Chemical Weapons (OPCW)’s investigations into devastating chemical attacks and re-emergence of chemical weapons in the country. To facilitate this, the Norwegian representative called for unhindered access for OPCW to launch and run investigations, as well as for the relevant authorities to hold perpetrators to account.

Out of 52 speakers, only 2 mentioned women, and only as victims of the conflict. The debate demonstrated that the WPS Agenda has yet to gain any normative strength in discussions on the situation in the Middle East. Apart from fleeting references to the suffering of women, speakers failed to address the multi-dimensional character of the human rights and humanitarian crisis across the conflict cycle, from conflict prevention to peace process to reconstruction and peacebuilding. Moreover, while all speakers noted the importance of ensuring sustainable peace in the Middle East, none referred to disarmament as an important means of achieving this.

The lack of gender perspective is very challenging as it fails to recognise certain importance issues, including the importance of women’s participation in peace talks and facilitating space for women’s participation in decision-making, conflict prevention, stabilisation efforts and reconstruction work in the region. Although the representatives of Brazil and Turkey alluded to the importance of a Syrian-led,  inclusive peace process, no specific reference was made to acknowledge the importance of women’s participation. The Council also remains silent on the humanitarian crisis in Yemen and its proliferation dimension. Further, none of the statements acknowledged the differentiated impact of weapons on women, or recognised the role of women in disarmament efforts. In particular, no mention was made as to the use of sexual violence by armed government forces and rebel groups to instill fear, humiliate, punish, terrorise families and communities, and enforce social orders and norms particularly in marginalised communities.

The discussion and policies around addressing the situation in the Middle East remain gender-blind despite women’s organisations’ increased efforts to advance feminist, sustainable peace in the region. For progress, the Security Council, Member States and other relevant parties must: