Fourteen representatives attended the September 27th Security Council meeting on “Peace and Security- Terrorist Acts”. Each Head of State and Government made explicitly clear that terrorism poses a great threat to international stability and security and remains a large hindrance to worldwide peace. Although all were unanimous in their commitment to preventing and prohibiting terrorist acts, they were much more elusive on how terrorism impacts women; only Lebanon and the United States referenced women in their statements.

Although issues pertaining specifically to women were largely left out of the dialogue, the Council did discuss other important matters. Firstly, all Member States were called upon to strengthen their commitment and cooperation in battling terrorists and terrorist groups, both within their own borders and those that work trans-nationally. To do this, the Council implored the need to enhance better understandings of one another's culture, as to diminish discrimination and counter the forces that lead to intolerance. Furthermore, it was noted that military and police forces alone cannot combat terrorists, but that nations need to also address issues that may be conducive to its spread: education, development, and poverty.

The Council's conclusions were therefore focused on combating terrorism through a multilayered approach, one that includes strengthening international law, emphasizing human rights and increasing global dialogue. The members stressed that such a strategy requires collective action and a universal denunciation of all forms of terrorism and violent 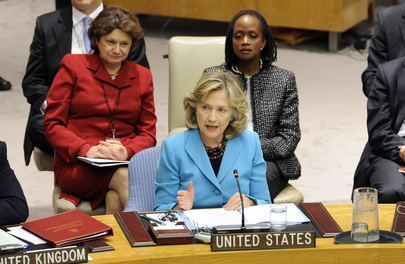 acts of intolerance. An enhanced respect for all global cultures and international security are indivisibly linked.

Hillary Rodham Clinton, Secretary of State of the United States of America, addresses the Security Council high-level meeting on ways to curb terrorism.