The Security Council Open Debate entitled, “Maintenance of International Peace and Security: Trafficking of Persons in Conflict Situations” was convened by the Council’s current president, Spain, on 20 December 2016. The meeting was framed as an opportunity to strengthen frameworks for the prevention of, and response to, human trafficking. The statements delivered at the debate placed significant emphasis on trafficking committed by terrorist groups such as the Islamic State of Iraq and the Levant (ISIL or Da’esh) and Boko Haram. Representatives of Member States and UN entities underscored that the instability, poverty, and weak rule of law during times of conflict facilitate trafficking, and particularly victimise vulnerable groups such as women and children or refugees and migrants. Speakers offered widespread condemnation and issued calls for accountability and multi-lateral cooperation to tackle the crime.

The Council unanimously adopted Security Council Resolution 2331 (2016), which calls on Member States to ratify all relevant international instruments to prevent and suppress trafficking in persons, take immediate action to ensure accountability for perpetrators of the crime, implement measures to disrupt trafficking networks, and impose reforms to improve victim identification and assistance. The document emphasises the disproportionate impact of trafficking on women and children, requests that UN entities better coordinate to protect these vulnerable groups, encourages member states to integrate anti-trafficking action plans with Women, Peace and Security action plans, and further encourages member states to collaborate with local women’s organisations in prevention and accountability measures. 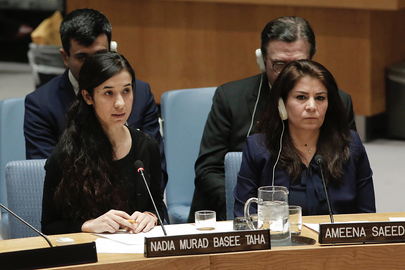 Nadia Murad Basee Taha (left), UNODC (UN Office on Drugs and Crime) Goodwill Ambassador for the Dignity of Survivors of Human Trafficking, addresses the Security Council ministerial open debate on the theme “Trafficking in persons in conflict situations”. At her side is Ameena Saeed Hasan, civilian activist for the Yazidi women's rights. UN Photo/Evan Schneider

A total of 74 statements were delivered at the debate. Secretary-General Ban Ki-Moon introduced the meeting, stating that “war provides oxygen for terrorist groups” and echoing many of the calls for action enshrined in Resolution 2331 (2016). He was followed by briefers from civil society, the UN Office on Drugs and Crime (UNODC), and his Special Representative on Sexual Violence in Conflict. The briefers spoke to the need to establish sexual violence as a method of terrorism, current levels of impunity for perpetrators and injustice for victims, and the role of law enforcement in disrupting trafficking flows. Among others, representatives from Spain, Angola, Brazil, France, Ireland, and the Russian Federation conceptualised trafficking as an issue of International Peace and Security, rather than a simple criminal activity. Nadia Murad and the representatives of Belgium, Cote D’Ivoire, France, and Nigeria asserted that human trafficking, particularly when directed against specific religious or ethnic groups, constitutes a crime against humanity. Though the statements of  representatives of the UNODC and INTERPOL reflected the complex nexus of human trafficking with other forms of transnational organised crimes such as arms trafficking, no connections were bridged between disarmament and the prevention of trafficking. Only the Secretary-General and the representatives of Afghanistan, Ireland, and the Holy See identified conflict prevention as a fundamental method for preventing human trafficking in conflict.

Other major themes throughout the debate included the need to disrupt financial flows to terrorist groups, end impunity for perpetrators, improve identification programmes along migrant routes, decriminalise acts committed by trafficking victims, and strengthen normative frameworks designed to prevent and suppress trafficking. Notably the representative of Greece outlined the state’s initiative to coordinate stakeholders in efforts to protect vulnerable groups with refugee populations from trafficking. The representative of Brazil provided invaluable perspective regarding international responses to human trafficking, remarking that “there is an ill conceived bias towards military solutions, which only help fuel human trafficking”. 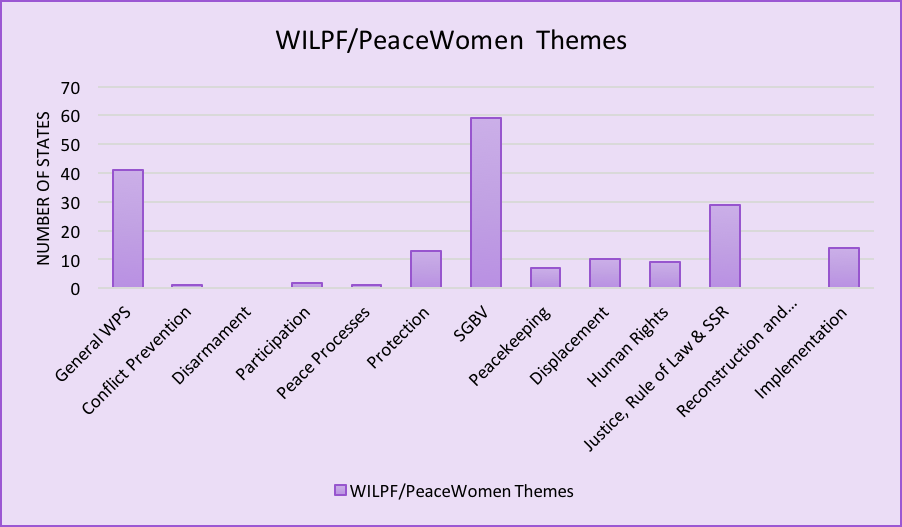 Though briefers such as the Special Representative of the Secretary General for Sexual Violence in Conflict (SRSG SVC) Zainab Bangura, Goodwill Ambassador for the Dignity of Survivors of Human Trafficking, Nadia Murad, and civilian activist for Yazidi women’s rights, Ameena Saeed Hasan, illustrated the horrific and disproportionate impact of trafficking on women and girls, 18 (24 percent) speakers failed to include any gender perspective in their statements.

Though a handful of speakers noted the intersecting vulnerabilities of women refugees, the need to protect women and girls due to their vulnerability, or the need to prevent sexual abuse and exploitation by peacekeeping forces, most of the gender-sensitive language throughout the debate fell within the categories of General WPS, Sexual and Gender Based Violence, and Justice, Rule of Law, and Security Sector Reform.

The December 20 debate was notable in that a majority of speakers displayed a propensity to separate issues of sexual violence in conflict from issues of human trafficking. Though most state representatives referenced the vulnerability of women and girls or the dimension of sex trafficking, the issues remained separated from the main topic of the debate, demonstrating a lack of substantive integration for the WPS Agenda. Furthermore, though this meeting offered a strong platform to highlight women’s issues within International Peace and Security, the role of women was largely relegated to that of victims, rather than agents of change. This is also reflected in Resolution 2331 (2016), where the vulnerability of women and children is stressed, but which virtually lacks measures to engage women in developing policy or otherwise preventing, suppressing, or responding to the crime.