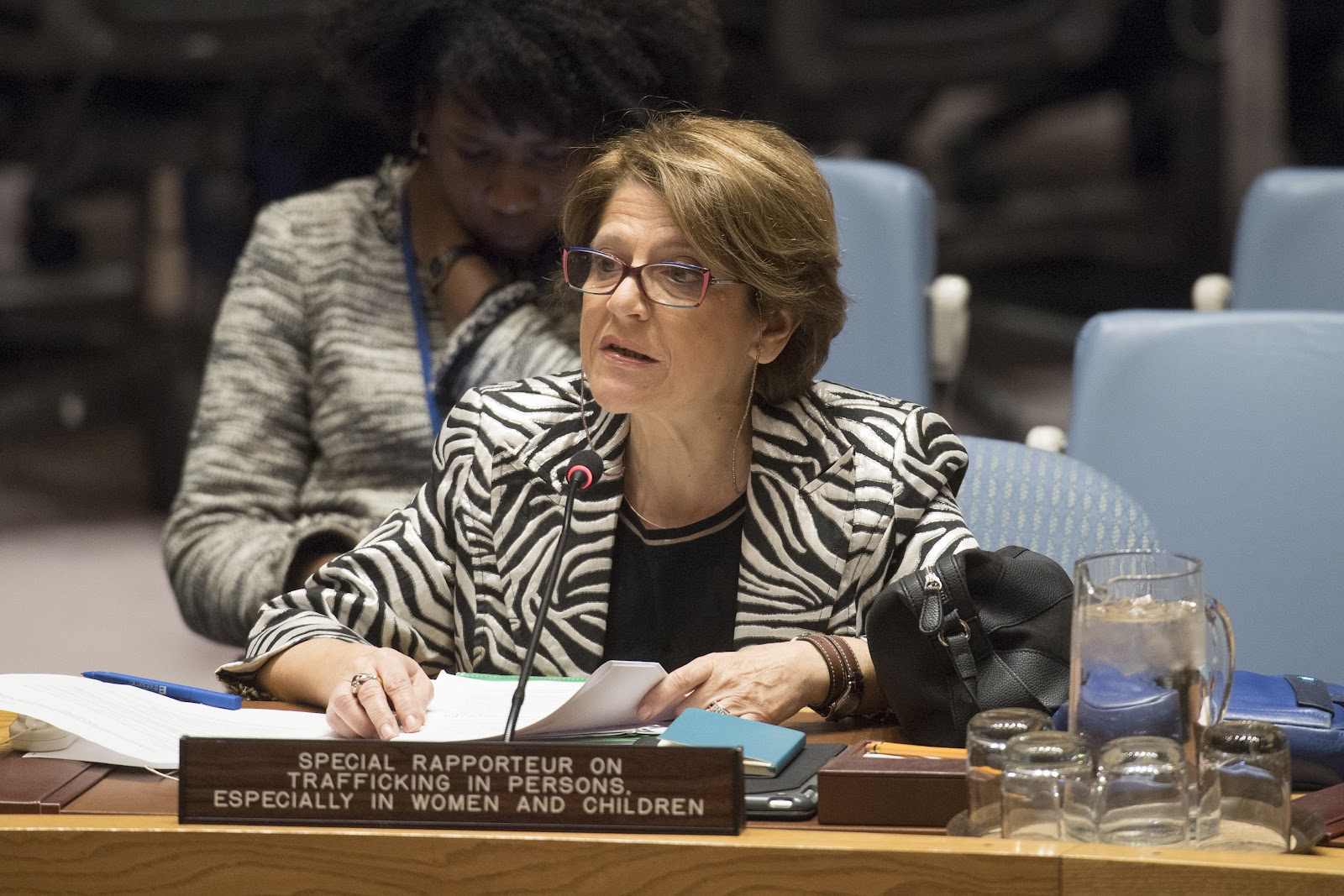 Maria Grazia Giammarinaro, UN Special Rapporteur on trafficking in persons, especially in women and children, briefs the Security Council during the open debate on trafficking of persons in conflict situations (UN Photo/Eskinder Debebe).

The Security Council Open Debate under the the theme “Maintenance of International Peace and Security: Trafficking of Persons in Conflict Situations” was held by Italy -the Security Council President for the month of November- on 21 November 2o17. Expressing dismay at recent images of individuals auctioned as slaves in Libya, speakers focused their statements on the use of human trafficking by armed groups, including terrorist groups, to recruit soldiers and raise funds in conflict-affected areas. Most speakers highlighted the vulnerability of women and children in conflict situations, where weak governance and the collapse of the rule of law enable armed groups to carry their “dirty business”. Several speakers reiterated that in line with Resolution 2331 (2016), offences associated with trafficking in persons might constitute war crimes, and, in some contexts, crimes against humanity.  States urged for concerted and effective action, accountability and strengthened international cooperation to investigate, disrupt and dismantle human trafficking networks. Very little attention was given to the role of civil society, and women’s groups in particular, in preventing this scourge and protecting the victims from such atrocious acts.

A total of 73 statements were delivered at the day-long debate. At the outset of the discussion, the Council unanimously adopted UN Security Council Resolution 2388 (2017) which reaffirmed the Security Council condemnation of all instances of trafficking in persons, especially women and children. The resolution also recognized the need to strengthen the identification, registration, protection and assistance for victims of trafficking,  and underscored the importance of collecting and preserving evidence relating to such acts so as to ensure that those responsible can be held accountable.  Further by text, the Council decided to give greater consideration to how peacekeeping and special political missions, can assist host States in exercising their primary responsibility to prevent and combat trafficking in persons.

In line with the Secretary-General report on trafficking in persons in armed conflict situations from November 2017 (S/2017/939), the resolution mentioned women as disproportionately affected by human trafficking, especially in cases of sexual and gender-based violence (SGVB), sexual slavery and servitude. In addition, it identified women as special targets of terrorist groups -including but not limited to ISIL/Daesh, Boko Haram, Al Shabaab and the Lord Resistance Army (LRA)- who use sexual slavery, forced marriage, forced prostitution, forced pregnancies and enslavement as tactics of war.

The major themes throughout the debate included the need to disrupt financial flows to terrorist groups, improve identification programmes along migrant routes, create safe migration channels, decriminalise acts committed by trafficking victims, and strengthen normative frameworks designed to prevent and suppress trafficking. In their statements, member states outlined programmes and mechanisms to root out trafficking and help victims through the three‑part effort of prevention, protection and prosecution. Numerous states emphasised the crucial importance for the international community to adopt a (i) shared responsibility approach, and (ii) a human rights-centered approach to combating trafficking in persons.

Speakers at the debate reminded the Council that trafficking in persons is the result of conflict and displacement and that consequently human trafficking knows no border. According to the representative of Senegal, 60 percent of those falling in the web of trafficking are fleeing civil war into neighboring states. Thus, speakers at the debate agreed that such a reality requires a multilevel and multi-stakeholder approach, focused on prevention.

At the national level, speakers underscored the primary  role of governments in transit and origin countries to prioritize fostering sustainable development in order to tackle the root causes of irregular migration. Moreover, Representatives of Sweden and South Africa added that further national efforts should focus on strengthening institutions and law enforcement capacities to fill in the governance gap, which allows trafficking in persons to flourish. Additional national prevention efforts to halt trafficking should also include national action plans (NAPs) on trafficking in persons, as outlined by the representative of the Maldives, Pakistan and Armenia.

At the regional level, states underscored the importance of regional counter-trafficking policy harmonization and cooperation frameworks. In this regard, the representatives of Ethiopia, Egypt and Sudan mentioned the Khartoum Process as as a successful regional example. Specifically, the representative of Ethiopia highlighted how regional frameworks of action can facilitate information-sharing and data-gathering on trafficking in persons in the region and thus facilitate the screening and early-identification of victims of human trafficking. The representative of Japan added that refugee camps registration mechanisms could represent additional useful tools for regional organisations to identify victims of trafficking  and people vulnerable to trafficking.

At the international level, speakers emphasized the importance for international agencies to enhance coordination in the tracking of financial flows and transactions derived from trafficking. Specifically, recalling Resolution 2388 (2017), member states urged for increased efforts to collect, analyse and share data relating to financial flows associated with human trafficking. Further on the international level, several states very prominently urged for the revision of the international immigration system and the development of safe channels of immigration, to reduce the vulnerability of those to whom borders are now closed. The representative of Bolivia even suggested the idea of universal citizenship.

Concerning the actions of the Security Council specifically, the representatives of Spain and the United Kingdom encouraged the Council to make full use of special political missions and peacekeeping missions to help national governments prevent and fight trafficking in persons. In addition, the representatives of Belgium, Indonesia, the Philippines and the European Union urged the conduct of human trafficking-sensitive pre-deployment training for UN Peacekeepers and frontline officers, as part of a more consolidated effort to prevent trafficking in persons on the international level.

2.      A Human Rights Perspective to Protect and Assist Victims of  Human Trafficking

Migrants and refugees, in their search for a better life, tend to become easy victims for traffickers because of their heightened vulnerability. For this reason, the representative of the European Union highlighted the crucial importance for member states to develop a human rights-based and victim-centered policy framework to combat human trafficking and protect and assist victim. A couple of speakers added that prevention and assistance frameworks should also consider the specific assistance needs of the most vulnerable, especially women and children. Concerning humanitarian assistance to trafficked populations, the representative of Ethiopia outlined the urgency for countries of origin, transit and destination to develop a victim-centered framework, such as an open door policy for migrants in need of humanitarian assistance. Concerning legal protection, France and Uruguay underlined that survivor of trafficking should not be penalized nor stigmatized for their participation in illegal activities that they might have been forced to take part in as trafficked individuals.

14 (19 percent)  statements given at the debate made detailed reference to the Women, Peace and Security (WPS) Agenda. Although Maria Grazia Giammarinaro, Special Rapporteur on trafficking in persons, especially women and children, specifically addressed the need for the Security Council’s Agenda on trafficking to be linked with the Women, Peace and Security (WPS) Agenda at the very outset of the debate, speakers largely failed to include any gender perspective in their statements. Instead, women were mostly referred to as “especially vulnerable” to human trafficking, reinforcing a perception of women as powerless victims. Women were only very rarely mentioned separately from children, which further contributed to envisioning women as vulnerable.

The representatives of Ireland and Jordan were the only two speakers at the debate to call for an increased focus on women’s empowerment in national, regional and global prevention frameworks. The representative of Jordan underscored the role of women in setting up hotlines providing referrals to the anti-trafficking unit for investigation of potential trafficking crimes, while the representative of Ireland underscored the key role of civil society, and women’s groups  in particular, as watchdogs for vulnerable communities.

Only 20 percent of statements delivered a t the debate explicitly mentioned the need to protect victims of human trafficking. Less than those 20 percent of statements addressed the specific protection needs of women who have been trafficked, such as tailored health services. The representative of the European Union mentioned the Spotlight Initiative,  aimed at eliminating all forms of violence against women and girls, as an important tool to strengthen victim protection.

The debate comprised a number of missed opportunities. In the future, conversations could be enriched by discussing the following:

1.The discussion would have been greatly reinforced if statements had focused more on the development of anti-trafficking programs which are informed by gender analysis, meet the needs of all survivors and include sex and age disaggregated data; this must involve gender-sensitive training on working with survivors for all field workers and including survivors in consultations on their individual protection strategies.

2. More discussion and especially more prosecutions for human trafficking offenses must be carried out, with a focus on the reinforcement of national judicial instruments, regional data sharing and transnational referral mechanisms to insure traffickers are not protected under any legal system. It is through the delivery of repetitive and predictable justice that we will go from an environment of impunity to an environment of justice for human trafficking.

3. The discussion  fell short of offering suggestions to create legal and safe migration channels, one of the key international reforms needed to effectively prevent human trafficking. The international community must uphold the rights of all human trafficking victims by urgently improving access to international protection through humanitarian visas, increased victims resettlements, greater access to information and fair hearings, and train national judicial staff.

4. The discussion fell short of emphasising the need for the ratification of all relevant international instruments to prevent and suppress trafficking in persons, such as the United Nations Convention against Transnational Organized Crime and the Protocols Thereto, which lay the ground for national prevention mechanisms and ultimately international concerted action.