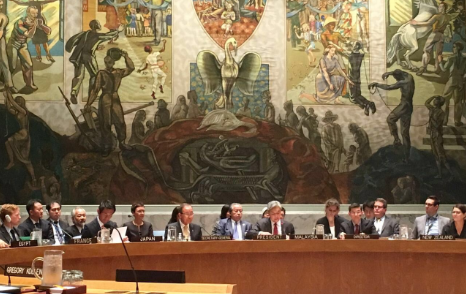 On Tuesday 23 August, 2016, under the Japanese presidency, the Security Council held an open debate under the theme, "Challenges in Addressing Proliferation of Weapons of Mass Destruction (WMDs), their means of delivery and related materials."

The dominant themes of the debate were the importance of improving national capabilities and international cooperation to detect, stop and deter the trafficking of illegal weapons, and the need to enhance mechanisms ensuring the safeguard of nuclear weapons and materials. Specifically, all Member States underscored the evolving threat of such weapons falling into the hands of non-State actors and terrorist groups.

Sadly, the representative of Panama was the only speaker to bring the Council’s attention to the clear link between the proliferation of WMDs, heightened militarism and its negative effect on women's security. Aside from this statement, no mention of gender was made by all speakers including the Secretary-General. As it is clear from the analysis, national ambitions for control of territory, markets and populations will continue to be a serious threat. It is in the hands of political actors – nation states, alliances of states, non-state militias – that weapons systems do their deadly work. Disarmament and non-proliferation instruments are only as successful as Member States’ capacity and desire to implement them.