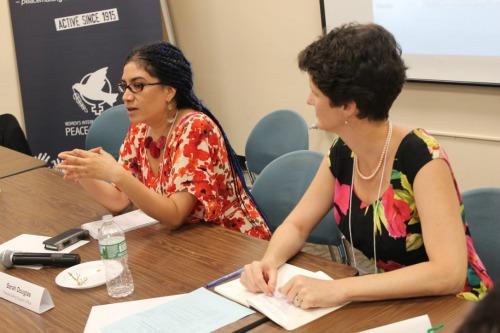 The world continues to shake from the aftershocks of Britain voting to quit the European Union, Turkey’s failed coup, and attacks and violence from Nice to Germany to Baghdadto Colombia. In the US, the Republican nominee for presidenthas had his platform praised by white supremacist leaders,and has effectively advocated for the spread of nuclear weapons and the use of military force to extract oil from Iraq to Libya. Within this context, it feels like more than ever a light is needed to disperse the gathering darkness.

One such spark of light comes from the upcoming Rio Olympics, which start in just over a week, and which are part of a tradition aimed at building peace through sport, without discrimination, through friendship, solidarity and fair play. Among the over 11,000 athletes, this year’s Olympics will include the first-ever refugee Olympic team, with athletes from the Democratic Republic of the Congo, Ethiopia, South Sudan, and Syria, in order to shine a spotlight on the worldwide refugee crisis and promote #OlympicPeace.

Another spark is the AWID conference mobilising the feminist movement, also being held in Brazil immediately after the Olympics. At the conference, women human rights defenders will mobilise across movements to build collective power for rights and justice. WILPF delegates from Colombia to Nigeria will join a host of other activists to explore feminist visions that#MoveTheMoney from war to peace, and share a feminist playbook for peace.

In the context of the commitments made at the World Humanitarian Summit and upcoming September Summit on Refugees and Migrants, these spaces for creative, non-violent mobilisation are more critical than ever.

The WILPF 100th anniversary Manifesto highlighted the importance of “imagin[ing] a creative work of solidarity across hemispheres, national borders, cultural groups, localities, classes and genders that is unprecedented” and “working to transform gender from a power relation to one of partnership.” WILPF/PeaceWomen’s 7-8 July workshop on Women, Peace and Security financing gives some concrete proposals for what each of us can to do to #MoveTheMoney from a political economy of war to a political economy of gender justice and peace.

As the world comes together around Rio, let us use this time to strengthen solidarity and explore what each of us can to make another world possible. Let us use this opportunity to reject racist and xenophobic rhetoric, and to demand effective action to protect, assist, and empower women and girls in the global refugee crisis.

Arundhati Roy once said, “Another world is not only possible, she is on her way. On a quiet day, I can hear her breathing.”

Whether through law, culture, sports, or daily acts of solidarity, we invite you to choose your own creative way to advance peace and justice. The time is now for solidarity and action.

Inside the High-Level Thematic Debate on Human Rights On July 12-13, the President of the General Assembly, Mogens Lykketoft, organised a High-Level Thematic Debate of the UN General Assembly centered on human rights. The event focused on how to reinforce the foundations of the international human rights framework, as well as the framework’s contribution to peace, security and sustainable development.

Secretary-General Ban Ki-Moon highlighted the importance of human rights in his opening statement, declaring, “In our connected world, we all need human rights for peace and prosperity because repressive policies make no one safe”. Several interactive segments followed, allowing experts to discuss key challenges preventing the full implementation of human rights and ways to overcome such barriers, including the roles of Member States and civil society. Challenges highlighted included the implementation of national and international laws and treaties; the difficulty of civil society to access the UN and be considered as allies by Member States; and the lack of funds to finance civil society and the lack of recognition of women’s work.

During the debate, Member States reaffirmed their commitments to protecting human rights and the value it has to achieving the 2030 Sustainable Development goals. Other themes touched on included the need to mainstream human rights across the UN agenda and its value in the face of global threats. 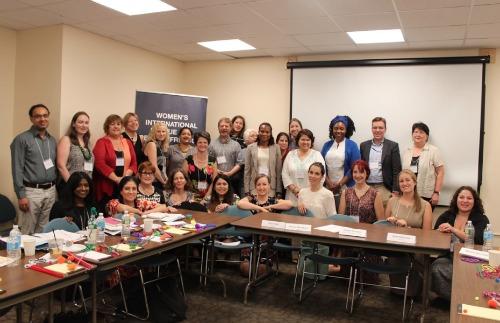 “We reject the fact that there is no money for gender justice.” This statement by PeaceWomen Director Dr. Abigail Ruane set the tone and mission for the WILPF/PeaceWomen’s Women, Peace, and Security Financing Workshop, held on July 7-8 in New York.. The event, entitled “Advancing the Women, Peace, and Security Agenda—Local to Global Financing as Mechanisms for Gender Equality and Stable and Peaceful Societies,” brought together civil society experts from development and security sectors to develop concrete strategies for gender equality and peace. Throughout the intensive two-day event, attendees mapped financial flows, shared good practices, and took part in an interactive gender budgeting workshop.

The workshop was followed by a side event to the High Level Political Forum on Sustainable Development, entitled “Ensuring that No One is Left Behind: Financing Gender Equality and Stable and Peaceful Societies for Effective Implementation of the Women, Peace and Security Agenda.” The side event reported back from the workshop and was attended by over 55 participants, including from the missions of Austria, Netherlands, New Zealand, Spain, Switzerland, United States, and Uruguay.

As Deputy Peace and Security Chief of UN Women Nahla Valji reminded participants at the event’s outset, member states must commit to invest in gender equality and peace if they wish to “ensure that no one is left behind”. Participants called on member states to strengthen Women, Peace and Security financing, including by: 1) financing UNSCR 1325 National Action Plans, 2) implementing  Gender Responsive Budgeting, 3) strengthening accountability on defense budgets, and 4) investing in civil society-inclusive funds, such as the newly launched Global Acceleration Instrument.

Read the full blog post about the event here. Watch this space for a full report offering more detailed information and analyses of both events.

An Analysis of Chapter Seven of the Global Study: Building Peaceful and Inclusive Societies in the Aftermath of Conflict 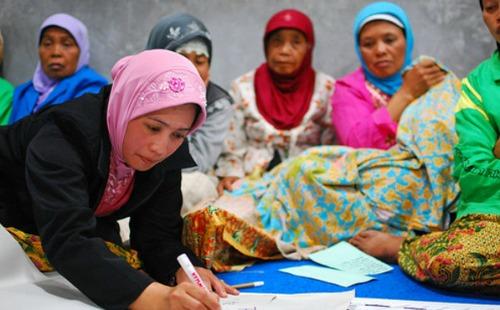 A woman leads a community meeting to discuss the reconstruction of a village in Yogyakarta, Indonesia. (Photo: The World Bank)

Chapter seven of the Global Study on the implementation of UNSCR 1325 addresses the role of women in building peaceful societies. It is often women peace advocates on the ground who are instrumental in stitching the fabric of society back together after a conflict has ripped it apart; women’s participation is crucial for economic recovery, political legitimacy, and social cohesion. However, women too often find themselves largely locked out of the decision-making forums for building a new society once conflicts are over. In addition, gender-responsive peacebuilding suffers from a lack of resources and political will, as well as from insufficient expertise and capacity, especially at the country level.

The chapter demonstrates that there must be a focus on long-term comprehensive programmes aimed at systemic changes. Without a systemic change to facilitate and enable political participation, economic security and physical safety, women will not be able to realize their potential as contributors to building peaceful societies.