Security Council Open Debate on the Protection of Civilians in Armed Conflict, May 2011 Member States took the opportunity to express their views on the Council's controversial decision in SCR 1973 (2011) to authorize States to “take all necessary measures” to protect civilians in the Libyan Arab Jamahiriya, including the recent NATO bombings. States acknowledged that “both conceptually and practically new ground has been broken” (Turkey) in the Council's treatment of the Protection of Civilians agenda. Statements reflected country-specific concerns about impeded access to humanitarian assistance, and violations of human rights and international law in conflicts on the Council's agenda: Afghanistan, Côte d'Ivoire, the Democratic Republic of Congo, the Occupied Palestinian Territories/Gaza, Iraq, Sri Lanka, Somalia, and South Sudan; as well as during recent violence and unrest in: Bahrain, Burma, Colombia, Syria, and Yemen.

The debate featured 51 statements including: 3 UN officials, the permanent and nonpermanent members of the Council, and 33 other delegations. Consistent with the previous Council debate on the protection of civilians in armed conflict, 33 of these statements, 65%, addressed the gender dimension of the protection of civilians and issues of women, peace and security. Most of these gender references were focused on protecting women from sexual violence in conflict, representing a narrowing trend of addressing women, peace and security within the Council. Attention was also given to the latest WPS resolution, SCR 1960 (2010), which includes a monitoring mechanism for sexual violence.

Out of the 51 statements, 33 addressed the gender dimension of the protection of civilians and issues of women, peace and security. These references were made by two of the three UN officials and 31 of the Member State statements (see statements and extracts below). Of particular regret was the continued absence of women/gender from Under-Secretary-General for Peacekeeping Operations (DPKO), Alain Le Roy's statement to the Council.

The focus of the gender references was on protecting women from sexual violence in conflict, representing a narrowing trend of addressing women, peace and security within the Council. Armed conflicts in which women were cited as needing such protection included those in the DRC, Côte d'Ivoire, Libya, and Yemen.

Several Member States supported the latest WPS resolution, SCR 1960 (2010), which includes a monitoring mechanism for sexual violence. Some also (South African, Switzerland, and Uruguay) extended their support for integrating the WPS agenda with the protection of civilians in armed conflict and the protection of children in armed conflict, an initiative taken by Brazil's presidency of the Council in February 2011. 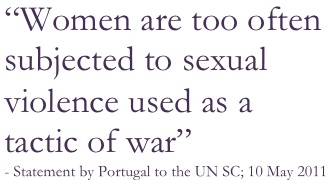 In the OCHA statement, Under-Secretary-General Amos provided useful insight into the complex context in which sexual violence occurs. She stated that sexual violence "remains a defining characteristic" of conflict, particularly in the DRC but also Côte d'Ivoire, and it coexists with other factors such as post-election violence; attacks against civilians, humanitarian workers, and peacekeepers; and indiscriminate-shelling.

OHCHR acknowledged the need for women's participation and gender mainstreaming in the protection of civilians. "In accordance with the letter and spirit of Security Council resolutions 1888 (2009) and 1960 (2010), OHCHR is in discussion with all relevant United Nations partners regarding the possibility of women protection advisers being located within the human rights components." This reference and the Australian statement were regrettably the only statements, which referenced the need to engage women as agents in the protection of civilians.

Absent from the three UN briefings (OCHA, DPKO, and OHCHR) and national statements was consideration for the gender dimension of discussed themes including detainees and the impeded access of humanitarian assistance.

Australia highlighted that “engaging local communities, including women, in discussions on protection requirements is key both in the planning stages and while peacekeeping missions are deployed in the field”. The Austrian statement similarly sought to emphasize “the importance of taking gender-sensitivities into account” when carrying out peacekeeping mandates and preventing violence. 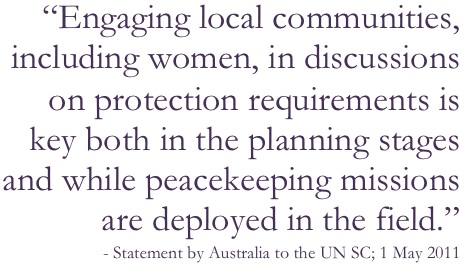 Citing means to implement the protection of women from sexual violence, the representative of the Swiss delegation stated: "Significant progress has been made in recent years in the normative and institutional framework with the adoption of important resolutions, most recently resolution 1960 (2010), which established a monitoring, analysis and reporting mechanism on conflict-related sexual violence. However, emphasis must now be placed on progress in enhancing protection on the ground." Joined by Canada, Norway, and South Africa, the Japanese statement similarly expressed that it "expect[s] that the monitoring, analysis and reporting arrangements on conflict-related sexual violence requested under resolution 1960 (2010) will be operational as soon as possible."

Chile, Peru, South Africa, and Ukraine broadened their focus to the other WPS resolutions. The Kenyan delegation highlighted the WPS institutional structure as evidence of “efforts that are expected to give new impetus to the protection of civilians in conflict.”

“There is no avoiding mention of the Libyan crisis”

Italy and Cuba addressed the unique vulnerability of women in armed conflict in a disagreement that divided UN-members during the open debate regarding the validity of the use of force by the international community in Libya for the protection of civilians. Italy argued "With repeated attacks on civilians, including women and children, the situation in the country had deteriorated so drastically that international action to protect the population was the only viable option." Cuba, joined by Nicaragua and Venezuela, asked " How can indiscriminate bombing, the use of sophisticated weapons and aircraft and the death of innocent people, including children, under the pretext of protecting other equally innocent civilians, be justified?...The silence of the Organization in the face of the murder of innocent people, including women and children, perpetrated by the foreign troops attacking that country, is outrageous.” Under-Secretary-General Amos also cited concern “over civilian casualties resulting from coalition air strikes.”

The delegation of Turkey acknowledged that “both conceptually and practically new ground has been broken” in the Council's treatment of the protection of civilians agenda. Council action in Libya and Côte d'Ivoire mark a departure from what Peru cited as previous inadequacy. In the November 2010 debate, they “outlined a clear message to the effect that the United Nations can and must do more on the ground to meet the requirements for the protection of civilians.” However, many statements suggested that this enhanced attention should go to the funding of PoC mandates in Peacekeeing Missions in order to address the current resource gaps, which make the effective protection of civilians improbable.

Broader suggestions to the Council included the need for consistency in responding to protection crises among civilians. In this vein, statements by Bangladesh, Cuba, Nicaragua, Syria, Turkey, United Arab Emirates, and Venezuela cited the civilians in occupied Palestinian territories as deserving of Council-level protection measures.