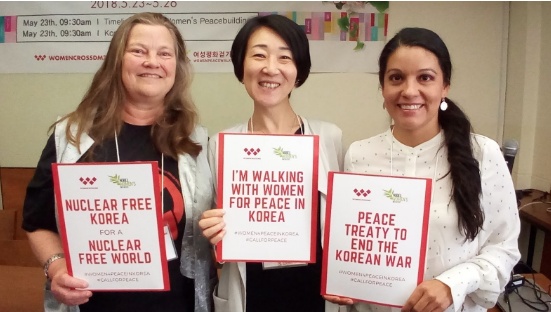 Three years ago, thirty women peacemakers crossed the Korean De-Militarised Zone (DMZ) from North Korea to South Korea, calling for an end to the Korean War with a peace treaty, reunification of divided families and women’s leadership in peacebuilding.

As I walked with 10,000 Korean women on both sides of the DMZ, I could not imagine that our calls for a peace treaty were within our grasp. But they were.

On 27 April 2018, South Korean President Moon Jae-In and North Korean Chairman Kim Jong-Un met in the DMZ at Panmunjeom and signed a historic agreement declaring an end to the war and a new era for peace in Korea. The Panmunjeom Declaration for Peace, Prosperity, and Unification of the Korean Peninsula outlines sweeping plans to reunite the Korean people through family reunions and civil society exchanges, reduce military tensions by transforming the DMZ and the West Sea into peace zones, and achieve a nuclear-free Korea Peninsula. This set a very clear roadmap for where the two Koreas are heading. Given how much is at stake now, it is crucial that the prospect of peace rests on the collective engagement by state and non-state actorsworking together to ensure that peace prevails.

This is a risk that women peacemakers in South Korea and North Korea understand all too well and are not willing to accept. The Korean people need the support of the international community to ensure that peace, not war, prevails on the Peninsula.

Given the critical window facing the two Koreas, Women Cross DMZ and the Nobel Women’s Initiative arrived to Seoul, South Korea from May 23 to 26 to strategise with the Women’s Peace Walk on how to ensure our inclusion and launch a women-led Korea Peace Treaty campaign. Our four-day gathering will include a day-long “Korea School” and a strategy meeting between South Korean and international activists, an all-women's symposium at the Republic of Korea National Assembly, meetings with key South Korean officials and the foreign diplomatic community and a peace walk along the DMZ calling for a Peace Treaty.

As a global community, we all have a responsibility to finally bring an end to the Korean War. The Korean people need our solidarity at this critical hour, and women’s peace movements from Canada, China, Colombia, Guam, Hawaii, Iraq, Israel, Japan, Kenya, Mongolia, Northern Ireland, Philippines, Russia, Sweden, United Kingdom and elsewhere will be working together to see through a Peace Treaty that formally ends the Korean War and ensures women’s inclusion in the peace process to build a just and feminist postwar Korea.

We, as feminist peace activists, believe it is critical to be in Korea now to demonstrate our solidarity with the Korean people who want an end to seventy years of war that have kept millions of families separated, repression by both governments in the name of national security and massive spending in preparation for war instead of investments in education, healthcare, housing, and jobs.

Peace processes are more than stopping an armed conflict and dividing power and resources – they establish the foundation for a postwar society.

This is a fleeting moment, and if women’s groups are not involved in the official peace process and do not shape how security is defined, then we all will have far more difficulty ensuring that women’s rights, gender equality, and genuine human security are at the heart of a Korea peace agreement. 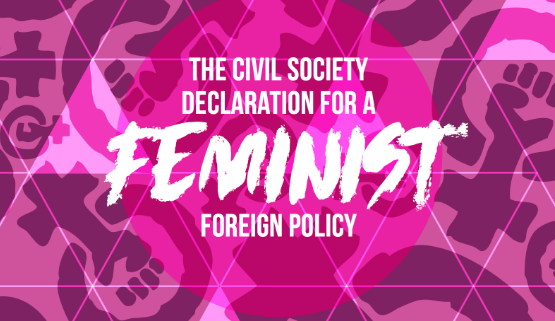 When Swedish Foreign Minister Margot Wallström declared a Feminist Foreign Policy, this was a pioneering move. Although it strengthened existing approaches in Sweden, rather than creating dramatic political change, it made women's human rights the centerpiece of action. Building on Swedish development policy, which has had a gender equality focus since 1996, the last four years of feminist foreign policy have demonstrated that feminist policy needs to go beyond women’s representation. A feminist perspective is also about challenging power structures, visualising what maintains them and, above all, the will to change.

Margot Wallström's leadership formulating and implementing feminist foreign policy has had not only national but international impact. As part of Sweden's membership in the UN Security Council, they spearheaded a broader conversation on conflict prevention and supported shift toward an increased number of civil society briefers on country-specific conversations. Although this has not addressed all challenges -- especially around selling weapons to dictatorships that violate women's and girls' human rights, or joining the Treaty Prohibiting Nuclear Weapons -- this has been an important step.

As Sweden looks forward to its 2018 elections, it is important that the next government continue and build on and further strengthen this pioneering work. As part of a broader civil society coalition, WILPF Sweden has just launched a Declaration for Feminist Foreign Policy, which identifies how this should be taken forward. The coalition calls for the next government to take on feminist leadership to address a holistic agenda, including on sexual and reproductive health and rights, shrinking spaces, land and food rights, social protection, labor rights, business and human rights, arms exports and disarmament, WPS, migration and refugees, protection, climate, and water. Feminist foreign policy can be successful in women’s and girls lives, but it must be supported by strong and ongoing leadership. WILPF calls on the next government step up.

Inside the Security Council Open Debate on the Protection of Civilians 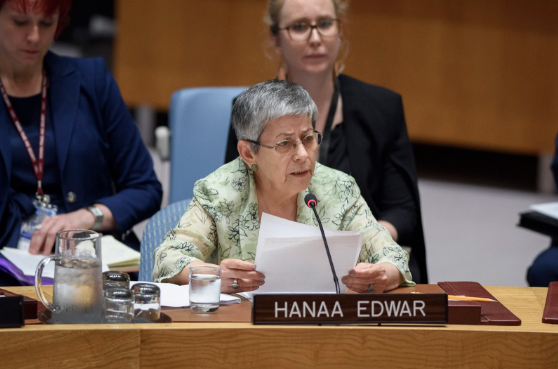 On 22 May 2018, under the Presidency of Poland, the Security Council held a ministerial-level open debate on the protection of civilians in armed conflict. The debate was framed as an opportunity to review the current state of protection of civilians and allow Member States to share their views and existing good practices. Many speakers shared measures to facilitate the rapid and unimpeded delivery of humanitarian aid for vulnerable persons and promote respect for international humanitarian law. Importantly, recognising the indiscriminate impact of and the lack of accountability for the use of weapons against the civilian population, Ireland, Costa Rica and Austria also initiated a political declaration to indicate support for the development of an international political instrument on explosive weapons.

Civil society speaker, Ms. Hanaa Edwar, Secretary-General of the Iraqi Al-Amal Association, shared her experiences from Iraq and called for greater engagement of local actors in determining the way in which support and assistance is delivered into communities. “Humanitarian aid must address longstanding, structural drivers of conflict, which remain issues for communities in return”, she added. However, the debate inadequately addressed the importance of women’s participation and gender-sensitive root cause analysis. These are essential to developing sustainable and effective mechanisms for the protection of civilians, as guided by the Women, Peace and Security Agenda.

A Commentary On The Syrian Commission Of Inquiry Report: "I Lost My Dignity" 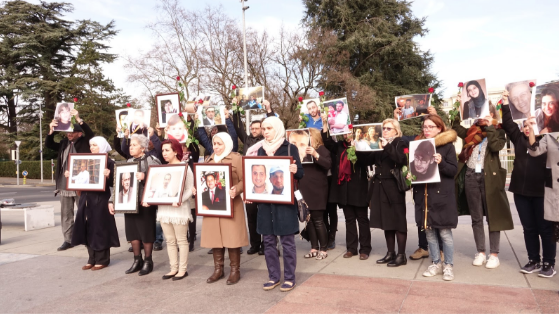 On 8 March 2018, the Independent International Commission of Inquiry on the Syrian Arab Republic published its investigations covering March 2011 to December 2017 in a UN report entitled “‘I lost my dignity’: Sexual and gender-based violence in the Syrian Arab Republic”. The report finds that “rapes and other acts of sexual violence carried out by Government forces and associated militias […] formed part of a widespread and systematic attack directed against a civilian population, and amounted to crimes against humanity.”

This month, WILPF Secretary-General Madeleine Rees and London School of Economics and Political Science Emerita Professor of International Law Christine Chinkin released a commentary on the UN report that recognises it for being a “groundbreaking”. According to Chinkin and Rees, this report takes an innovative approach that demands action on sexual and gender-based violence grounded in international criminal and human rights law for peacebuilding and gendered conflict prevention. “For there to be a breakthrough on the appalling human rights violations and violations of IHL in the Syrian conflict, the multilateral system, through all its manifestations needs to work as it is supposed to do”, conclude Chinkin and Rees. “It is incumbent on the system to make that happen.”

Monthly Action Points (MAP) For The Security Council: May 2018

Defending The Implementation Of The Peace Agreement In Colombia

A Feminist Analysis Of Opposition To Prohibiting Nuclear Weapons

Challenging The Customary Divide: Strengthening Implementation Of The Women, Peace And Security Agenda In Nepal

A Progressive Reform Agenda For The United Nations: Preparing The UN 2020 Summit

We Want To Be Heard! Local Women Demand Inclusion In The Sustaining Peace Agenda